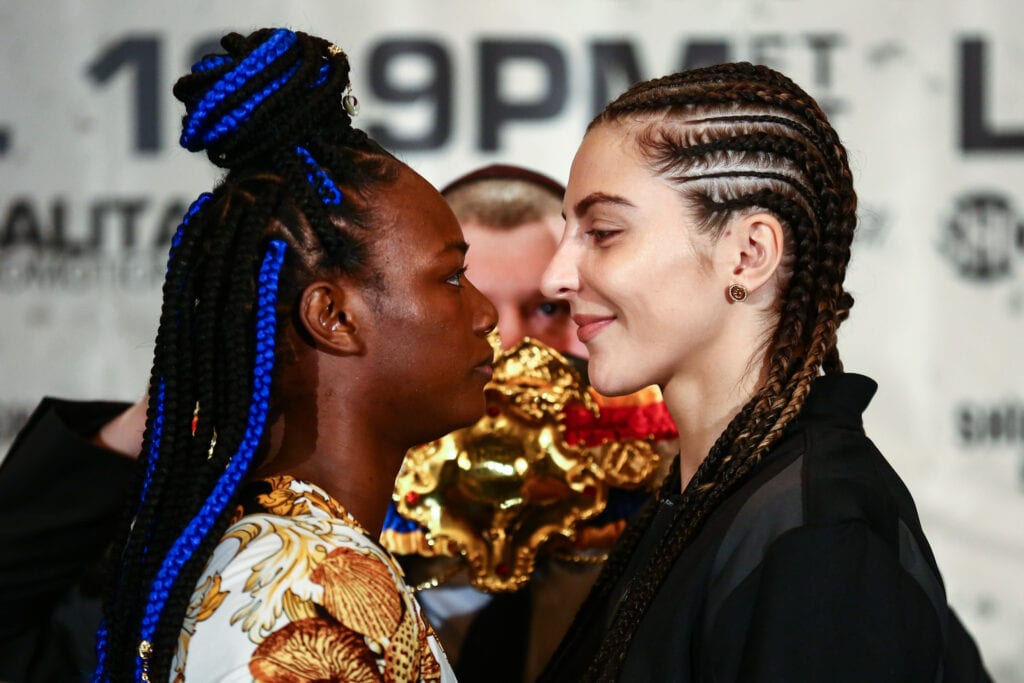 With a full slate of exciting fights this Saturday, one of the fights that are worth noting is the historic women’s middleweight bout between Claressa Shields and Christina Hammer. The weigh-ins from the Claressa Shields and Christina Hammer are apart of a fight card taking shape at Boardwalk Hall’s Adrian Phillips Ballroom in Atlantic City. This first-ever women’s unification bout will take place Saturday night at 9 p.m.

Shields stepped on the New Jersey State Athletic Control Board’s scale at 159¼ pounds for their 10-round championship match.

Hammer, the WBO middleweight champion, also met her contractual obligation by weighing in at 159 pounds even at Ocean Resort Casino.

WE HAVE A FIGHT! @Claressashields at a ready 159.4lbs and @LadyHammer1 at 159lbs ahead of tomorrow’s undisputed middleweight championship 9:10PM ET on Showtime🛡🔨

Shields mentioned to  Showtime’s announcers following the weigh-in. “I think it’s just crazy because her last fight, she fought at 164 pounds, She didn’t make weight, which was like, ‘Oh, I didn’t know champions do matches like that. But whatever – she came in at 164. So, I can see her fear, like I’m the bigger girl. You know, but I’m just shorter than her, only by like a smidgen, too. Like they say she 5-11. Look, if she 5-11, I’m 5-10½. But from what I know, I’ve always been 5-9. But hey, whatever they wanna give me.”

“But I never had a problem with making 160. I made 160 my last three fights easy. I have a nutrition team. I have a great coach. You know, I make sure I do everything I have to do. I might not have to say that I’m disciplined, but I’m quite sure that it shows. Every fight I’m dominant. I win every round. And I know that I make the fight the way I want it. So, whatever I’ll have to do to get the win against Christina Hammer, I’ll have no problem doing it.”

This historic women’s middleweight bout will take part of the main event of tripleheader on Showtime.

Shields-Hammer Press Quotes and Notes
Is this the end for Mike Alvarado?
Advertisement
To Top
We use cookies to ensure that we give you the best experience on our website. If you continue to use this site we will assume that you are happy with it.Ok