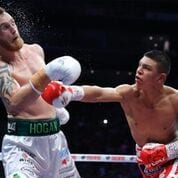 Leading up to their bout on Saturday, no one outside of the camp of Dennis Hogan gave him a shot against Jaime Mungia. Add me to that list as on the preview of the fight of this on the podcast didn’t think he had a shot.

Then they touched gloves Saturday night and the 34-year old mandatory contender went on a mission to make all non-believers change their tone down in Monterey, Mexico against all odds and 17,000 supporters of the hometown Mungia. After 12 rounds, the only three that seemed to still oppose this was the three judges at ringside.

The three judges had final tallies of 115-113 and 116-112 for Munguia and 114-114 even stopped Hogan of the upset win that many watching felt he had earned at Arena Monterrey in Monterrey. When I was watching this fight live, I had it as a draw.

Munguia to his credit admitted the same post-fight.

“Honestly, once the fight ended I thought it was going to end in a draw,” Munguia said after the fight. “I learned a lot about fighting through frustration. It was similar to what happened in my last fight”

Hogan, however, thought he was the new champion after the final bell.

“This is bad for boxing, bad for me, and a rematch is accepted straight away.”

“I knew I won the fight. I’m really disappointed to train as a hard  I did and for this to happen,” Hogan told DAZN’s Chris Mannix after the fight. “We came here in good faith and no disrespect to the people who scored it but that decision shouldn’t go through.

Hogan (28-2-1, 7KOs) started out strong start against the champion Munguia (33-0, 26KOs) who was not in sync in his first title fight in Mexico. The 22-year old from nearby Tijuana picked up his pace in the middle rounds of the fight but was not at the level to put away Hogan who was game and determined on leaving Mexico with Munguia’s WBO Super Welterweight title.

When Munguia thought he was going to pull away in the championship rounds, Hogan landed rights every time the champion came forward, catching him with his chin up in the air every chance he could but the contest went the distance without any knockdowns. It was a tough fight marred with a debatable scoring decision at the end of the day.

“Zanfer Promotions (Munguia’s promoter and current partner with Golden Boy Promotions) offered us one straight away,” Hogan insists. “They obviously know, everyone knows. I’m not one to cry, I’m not one to play, I’ll come back and win the title on neutral ground. I’ll win the title, set my family up.”

“They just tried to take my families future away and I’ll fight hard to win it back again.”

With that in mind, here’s hoping that Hogan-Munguia 2 happens sooner, rather than later.