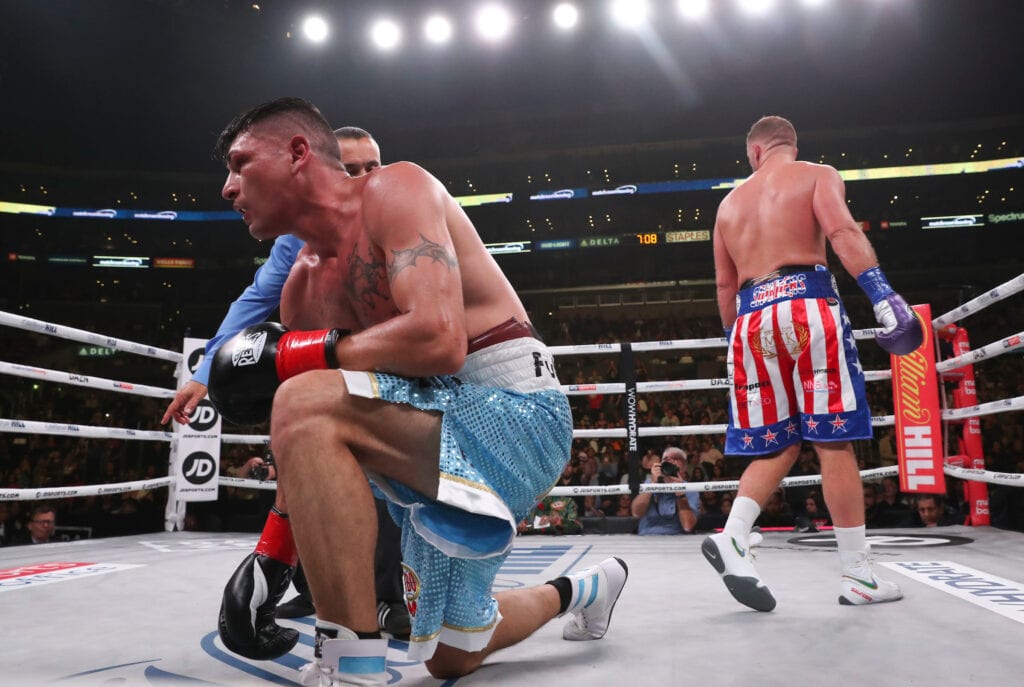 Saunders stops Coceres in the 11th to retain

It wasn’t pretty at all and at times not good, but WBO Super Middleweight champion Billy Joe Saunders in his Matchroom Boxing debut stopped Marcelo Coceres in the 11th round to retain his WBO title.

Coceres was fighting as a super-middleweight for the first time in his career. He also seemed to outbox Saunders, who seemed slow to get anything going. Coceres had gained momentum by the 11th round, but Saunders knocked him down 38 seconds into it after landing a right-left combination. Coceres got up quickly but then took a knee before responding to referee Ray Corona’s count.

A right uppercut by Saunders floored Coceres again with 1:32 to go in the 11th. Coerces yet got up and tried to ward off Saunders, but Saunders dropped him a third time and final with a left-right combination, which had referee Ray Corona waive this fight off.

Tough break for Coceres cause the fight was a close one with many watching thinking he may have been up or at least drummed up a draw before the 11th took a turn for the worst for him.

Saunders, after the fight, continued his mission of calling out Canelo Alvarez after the victory.

“Canelo Alvarez listen. If you want to become four-weight world champion, well your not four, you’re only three cause you was the Silver WBA Champion. Take me where you think I’m spent,” Saunders proclaimed after the fight. “You know this is the time to take me next. I want Canelo Alvarez to give the fans a big fight win, lose or draw. Canelo Alvarez, you’re a great fighter, and I respect you. You’ve done good things for boxing, and I just want to say for my American debut I wanted to say rest in peace to Patrick Day.”

Current 160 pound WBO champion Demetrius Andrade tweet was dripping with sarcasm in his thoughts of how Saunders looked while watching.

I'll beat the shit out of Billy Joe Saunders…

Needless to say that Saunders didn’t set the world on fire in his debut in the United States during this broadcast, and this was noticed by anyone with a set watching the DAZN broadcast Saturday night. Everyone wants a crack a Canelo Alvarez, but who will be next up for him we’ll find out in 2020. Saunders throwing his name into the hopper can’t be faulted, not sure if it’s one most want, however.