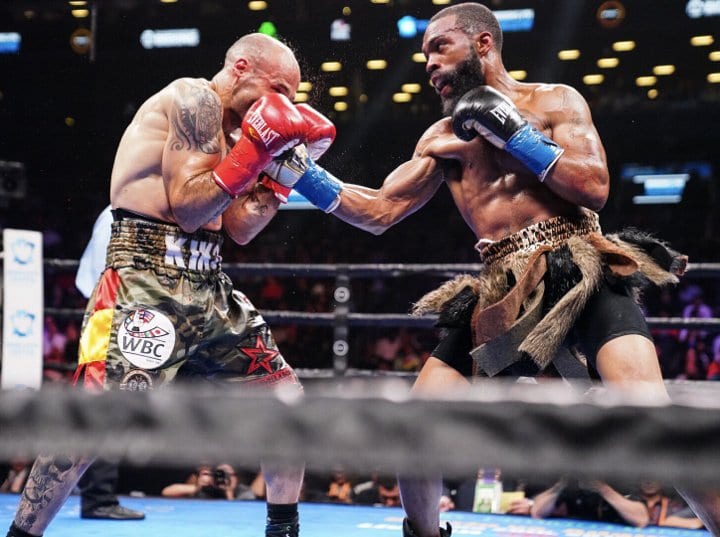 Kiki Martinez (39-9-2, 28 KOs) was little opposition against the faster, craftier, stronger Russell, who notched a TKO win at 2:52 of the fifth due to a severe cut over Martinez’s left eye.

Russell (30-1, 18 KOs) wasn’t in a world of his own in this matchup and it showing in the broadcast and in the ring in his lastest defense.

The third round proved to be the most significant to anyone watching. The southpaw Russell bounced a heavy left off the side of Martinez’s head. By the end of the round, a cut began presenting over Martinez’s left eye. Martinez was able to score with a few shots, one a left hook to the body in the last minute of the third, although was largely ineffective for a majority of the bout.

“I did pretty well,” Russell said after the fight. “We stayed behind the jab and he couldn’t get past it. We knew that intellect over athleticism would get it done.”

With :07 left in the fifth round, referee Ricky Gonzalez signaled Martinez to his corner, blood flowing from his left eye. Gonzalez, on the advice of the ringside doctor, ended it at 2:52 of the one-sided affair.

“We want (WBA Featherweight Champion) Leo Santa Cruz,” Russell said after the fight “We want to make this fight happen. The fire is all the way hot on this side of the field. You will get burned. I would love for that fight to happen this year. Let’s make it happen.”

Russell Jr. has taken a lot of flack and criticism for his lack of activity in the ring and even on the broadcast of this fight.  He wore a jacket after the fight saying “Leo Next, What’s up Al?” expressing his interest in the WBA champion. Well see, if this finally leads to more big name fights for him either against Santa Cruz or a move up in weight to take on Gervonta Davis.

Davis did mention on his Twitter during the fight he would be waiting.

I will be waiting on the call ??‍♂️