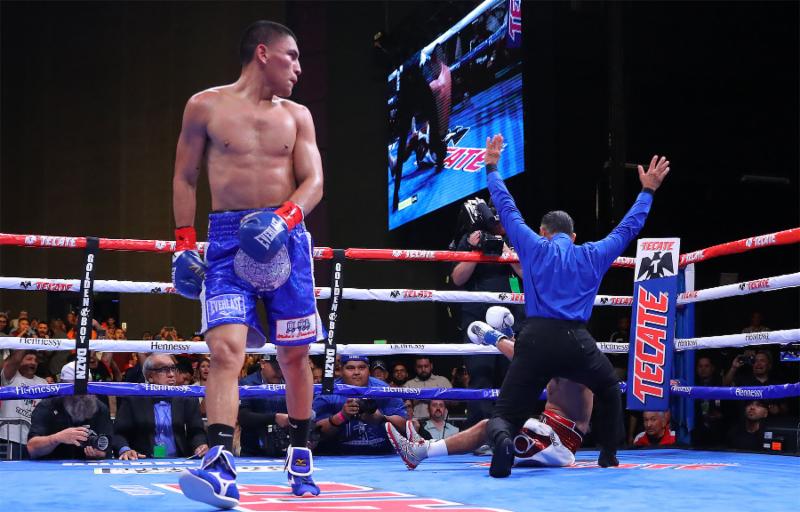 Vergil Ortiz Jr. made his homecoming a victorious one as he sends them home happy with a sixth-round technical knockout of Antonio Orozco. Ortiz the Dallas, Texas native, was fighting in nearby Grand Prairie at the Verizon Theatre in front a raucous crowd ready to cheer on the hometown hopeful.

The stoppage of the main event that aired on the streaming service DAZN came at 2:16 in round six to remain undefeated (14-0, 14 KOs) and to attain the WBA Gold Welterweight title.

It started well for Orozco early on who at first was able to keep Ortiz for most of the early rounds on the ropes. It looked like Orozco who has never been stopped in his pro career was game for the matchup against the highly touted prospect of Ortiz. That was until the sixth round bell rang.

The sixth round started with a flurry up shots with a nice uppercut sending Orozco down for the first time. From there it became survival mode for Orozco that he couldn’t hang on in as he was sent down the second and third time forcing referee Mark Calo-oy to end the fight.

Ortiz’s power shots is what led him to the victory with him landing a staggering 91 out of 181 with Orozco only landing 48 out of 224 in the contest.

While he looked impressive in the ring, Ortiz was very critical of his performance talking with Claudia Trejois on the DAZN broadcast.

“I’m a be honest, I didn’t like the way I did in the fight,” Ortiz told Trejois post-fight. “I could’ve done better the first three or four rounds (of the fight). I definitely got a long way as a boxer to get that world champion status, but we’re going to keep making those improvements.”

He also made sense of what he could do to improve in the ring.

“I just feel like I’ve been getting all these knockouts,” Ortiz said. “I’ve been saying that they haven’t been getting into my head and as you can see in that first round I got a little bit excited. Maybe I could’ve ended it, maybe not but I had to force myself to slow down.”

While Ortiz didn’t like what he did in the ring, it’s hard not to find fault in what was an impressive display.