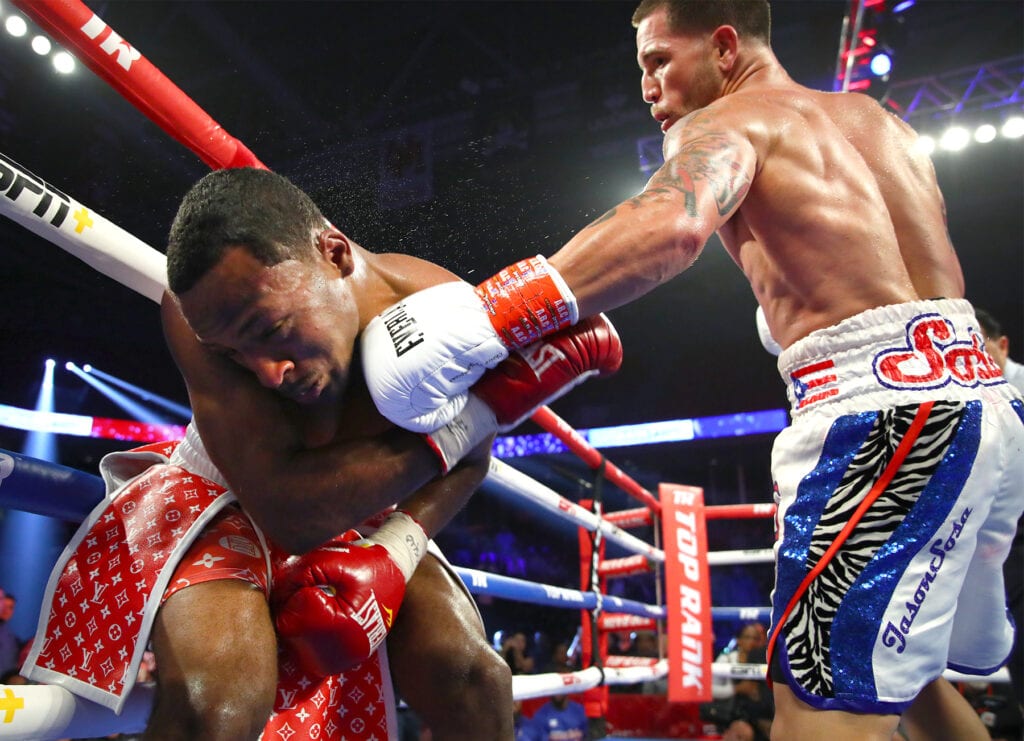 Jason Sosa mission to get a future world title shot has gotten better. The Camden, New Jersey native and former super featherweight world champion battered around and stopped Lydell Rhodes in seven rounds to win his third in a row in front of 1,723 fans at the Liacouras Center in Philadephia, Pennsylvania.

Sosa scored three knockdowns in all, with Rhodes’ corner indicating their fighter had enough, throwing in the towel in the seventh to mercifully end the contest.

Sosa (23-3-4, 16 KOs) lost back-to-back bouts to Vasiliy Lomachenko and Yuriorkis Gamboa in 2017, but with the dominating win over longtime contender Rhodes, he thrust himself back into the world title conversation.

“It was pretty satisfying. I think we did everything we were supposed to do tonight,” Sosa said after the fight. “There’s room for improvement, but we’re a top contender now once again. We never left. I need a title. I want to call out {Miguel} Berchelt and get that WBC belt.

“Don’t forget about me. I’m here. I ain’t going nowhere. I’m a warrior, baby. I come to fight. I put on good fights. The fans see me and appreciate me. I come out every night and do it for them.”

We've got a TKO victory!!

The story of the night, however, was that Two-time Olympic gold medalist Robeisy Ramirez lost a four-round split decision to Adan Gonzales in one of the biggest upsets in recent boxing history. Gonzales (5-2-2, 2 KOs) knocked down Ramirez in the opening seconds of the first round with a solid left to provide the gap in the victory.

“When they announced a split decision, I knew I better have won that fight or something would have seriously been wrong,” Gonzales said after the fight. “I attacked him from the start, and I got the win. You ain’t seen the last of me.”

It’s important to note here that the judges in this bout had it 39-36 and 40-35 for Gonzales, with one giving Ramirez the contest 38-37. had the bout 39-36 Gonzales and it seemed pretty clear from the knockdown on, he was in control of the fight.

Said Ramirez post-fight: “I feel like I won that fight. He may have been throwing more, but I was the one landing the cleaner punches. This is a setback, but trust me, I will be back.”

Anything can happen in the fight game. Adan Gonzales scores a split decision upset of Robeisy Ramirez in a closely fought battle.#SosaRhodes | @ESPN+ pic.twitter.com/tRleKvzWRC

Middleweight sensation Edgar Berlanga (12-0, 12 KOs) came into the ring with rapper Fat Joe and quickly made it 12 first-round knockouts in as many fights, stopping the usually durable Frenchman Gregory Trenel (11-5-2, 3 KOs) in 2:24 in the first round. Trenel had never been knocked out in 17 previous professional fights.

Berlanga said post-fight: “We went over the tape in the gym. It’s just repetition. We go over the same things, and each time we fight, we execute. He was a tough opponent. He took a good shot. He didn’t go down. He didn’t want to go down.

“I felt the love from the crowd and my friend Fat Joe walked me to the ring. It was a great night. I’m proud to represent my Puerto Rican people.”

South Philadelphia heavyweight prospect Sonny “The Bronco” Conto (4-0, 3 KOs) went the distance for the first time as a pro, shutting out Guillermo Del Rio (2-3-1, 2 KOs) over four rounds. Conto knocked down Del Rio in the fourth round and prevailed by identical scores of 40-35.

“You can’t load up on every punch in there,” Conto said. “This fight showed me how to be patient and work on the things that are going to get me to the next level.

“I’m used to being in there with guys who don’t go anywhere. I’ve sparred great fighters like Tyson Fury. That prepared me for a fight like this.”

Philly's very own @SonnyConto feelin' it after getting the win in his hometown ?#SosaRhodes | @ESPN+ pic.twitter.com/TKycm53g9c

In a spirited battle of unbeaten welterweights and the toughest fought match on the card, Paul Kroll (5-0, 4 KOs) defeated Shinard Bunch (2-1, 2 KOs) by unanimous decision (58-56 x 2 and 59-55) in a very competitive matchup.

Jeremy “Magic Hands” Adorno improved to 2-0 with a third-round knockout over Fernando Robles (2-2, 0 KOs) in a super bantamweight contest. Adorno, a southpaw, scored the KO with a left hand to the body.

That "Got My First KO" Feeling ?@jeremy_adorno gets the KO victory in Round 3!#SosaRhodes | @ESPN+ pic.twitter.com/tV1ZTZ5huE