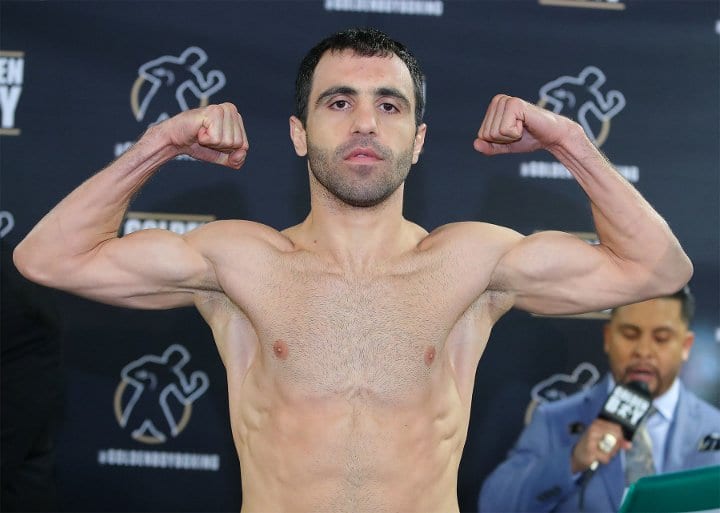 It was treat for as long as it lasted, but Azat Hovhannisyan came through on his promise by stopping Franklin Manzanilla early in four rounds Thursday night.

The main event of the Golden Boy “Thursday Night Fights” that aired on Ringtv.com and Facebook Watch from The Belasco Theatre in Los Angeles, California didn’t disappoint as Hovhannisyan and Manzanilla went at it in a WBA title eliminator at 122 pounds.

The was toe to toe action from the opening bell as both men were throwing punches and were fighting a very fan-friendly fight. The crowd was behind Hovhannisyan, who is the native from nearby Glendale, California. The broadcast had shown a fight stat total of over 300 punches thrown between the two that was only midway through the third round at the time.

The action, however, over time was one that Manzanilla was getting the worst of as the match went on with Hovhannisyan. The accumulation of punches finally knocked Manzanilla down and unable to beat the ten count, stopping the match at 2:50 in the fourth round.

During the broadcast, Johnathan Coachman and Douglass Fischer mentioned how Hovhannisyan wanted to stop Manzanilla within five to six rounds. Doing it in four seems like coming through on that guarantee.

With the victory, “Crazy A” Hovhannisyan is now in a position closer to take on the WBA and IBF champion Daniel Roman.  Roman was initially slated to on mandatory challenger Murodjon Akhmadaliev on September 13th but had to withdraw due to injury.

“This was a very easy fight at first,” said Hovhannisyan after the fight. “I could have made it a 12-round fight, and he would not have touched me. I wanted to make it a tough fight. I didn’t even feel his punches.”

“This was a great performance by Azat. Terrific,” Roach explained to BoxingScene.com from the locker room immediately after the fight. “He was too strong tonight with his overhand right hand. Azat’s improvement over the last few fights has been incredible. His boxing; his combinations. He used to be too rugged, and now he has more form. He’s matured so much from the Vargas fight. I would love to have that one back.”

Manzanilla was game and wanted to trade with Hovhannisyan, but in the end, came up short.

“We knew that Azat Hovhannisyan was a good fighter,” said Manzanilla. “We also knew he was a warrior. But I’m a man who likes to clash too. I tried to box, but I had to fight because that’s what people pay to see. It was the wrong game plan, but either way I’m going to rest and see what opportunities are out there for me.”