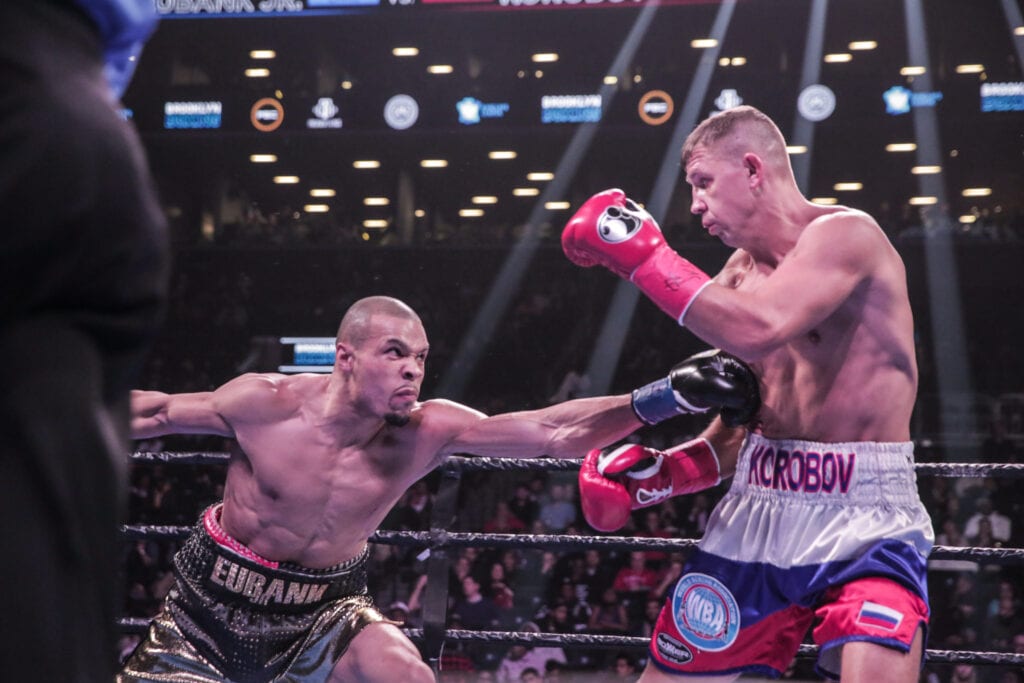 Eubank gets win as Korobov injured in bout

In the co-featured bout at the Barclays Center Saturday night, Chris Eubank Jr.’s (29-2, 22 KOs) long-awaited United States debut ended frustratingly as his opponent, Matt Korobov (28-3-1, 14 KOs), suffered a bout-ending injury at just: 34 of the second round. Because it was ruled a self-inflicted injury, the result was officially declared a TKO victory for Eubank, who picked up the Interim WBA Middleweight Title.

Korobov, a top contender in the middleweight division, injured his left shoulder after throwing a punch that failed to land. After consulting with the ringside doctor, it was deemed that he would be unable to continue.

Matt Korobov suffers a shoulder injury in round 2 of his interim title bout against @ChrisEubankJr and is unable to continue.#EubankKorobov pic.twitter.com/ZUIGhyGWUM

“I felt like I was about to get my swagger on,” Eubank told SHOWTIME reporter Jim Gray following the stoppage. “He just turned around and stopped. I was going to go jump on him. I guess something happened with his shoulder. There’s nothing to take from the fight. I threw like three or four punches. I was just warming up.”

In the buildup to the fight, Eubank, the son of British boxing legend and former two-division world champion Chris Eubank Sr., repeatedly said that there would be a new contender in the stacked middleweight division. Despite not getting a chance to introduce himself to the American audience in the way he envisioned, Eubank is looking ahead to a busy 2020.

“I’m the winner, I’m going to move forward and challenger for these belts,” said Eubank. “This wasn’t my dream. My dream was to come here to America and make a statement. Now that I’ve landed and I settled with the new promotional team, I feel I can get the ball rolling for an active 2020. It’s a shame it had to start like this, but it is what it is.”

“I was trying to throw the left hand straight, and I just felt the muscle immediately, like I pulled it,” said Korobov. “It was a lot of pain right away. I couldn’t fight with just one arm, especially being a southpaw.”

Charlo powers past Hogan to retain
Crawford stops Kavaliauskas at MSG to retain
Advertisement
To Top
We use cookies to ensure that we give you the best experience on our website. If you continue to use this site we will assume that you are happy with it.OkPrivacy policy