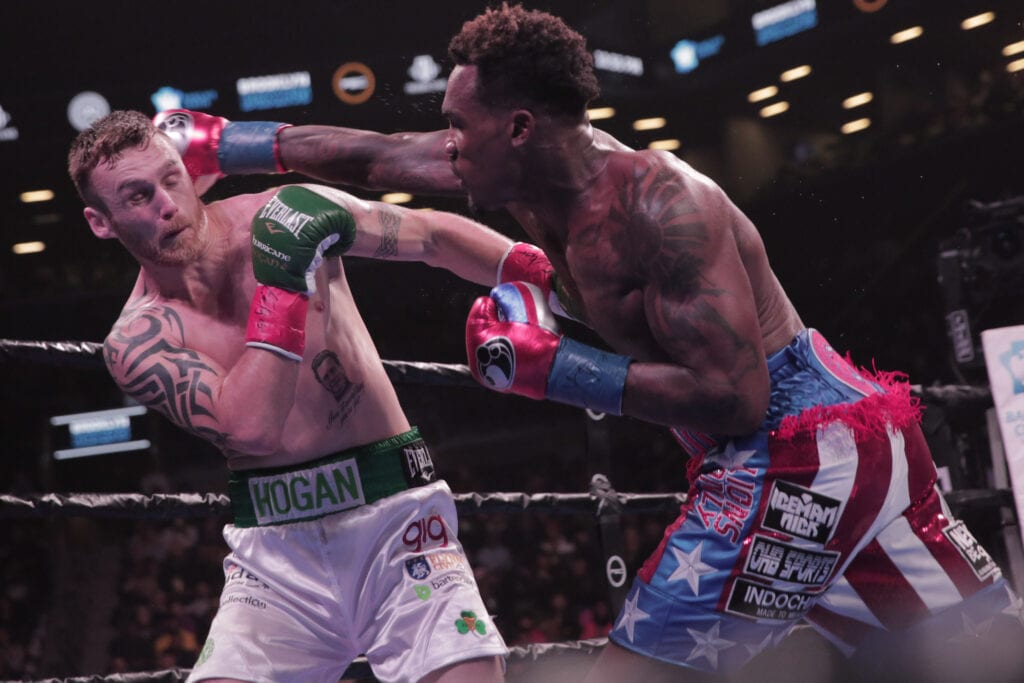 Charlo powers past Hogan to retain

Undefeated middleweight Jermall Charlo kept that zero intact as he over-powered Dennis Hogan in the main event Saturday night at the Barclays Center in Brooklyn, New York, stopping him in the seventh round of their contest.

The contest that aired on Showtime showcased Charlo’s power early on and started to break down Hogan and had a knockdown in the fourth round that sent Hogan hard to the canvas. Hogan got up quickly from it and continued but was sent down again in the seventh round by a left hook from Charlo. From that shot, Hogan got back up again, but when asked to walk back towards referee Charlie Fitch was wobbly forcing him to waive this contest over.

Hogan, reflecting on the second knockdown which stopped the fight, stated he didn’t know what hit him from Charlo.

“I wanted to keep going, but the decision was fair enough by the referee,” said Hogan, who moved up from 154 pounds to 160 to challenge Charlo for the bout. “I didn’t see the punch coming on the second knockdown. I was trying to keep boxing him, but then, all of a sudden, I was on the ground and the fight was over.”

Hogan, who was the underdog in this bout against Charlo, was looking at a 2nd chance to capture a world title in 2019 after suffering a very controversial loss to Jamie Munguia back in April.

Charlo, after the fight, mentioned that his power was the key to the victory over Hogan.

“Of course, my power prevailed tonight.  Lion’s Only, we’re 30-0,” said Charlo after the fight. “Ronnie (Shields) told me to cut him off. I just threw the shot and I made sure I threw it right on the money.”

Navarrete, Ancajas victorious in Pubela
Eubank gets win as Korobov injured in bout
Advertisement
To Top
We use cookies to ensure that we give you the best experience on our website. If you continue to use this site we will assume that you are happy with it.OkPrivacy policy