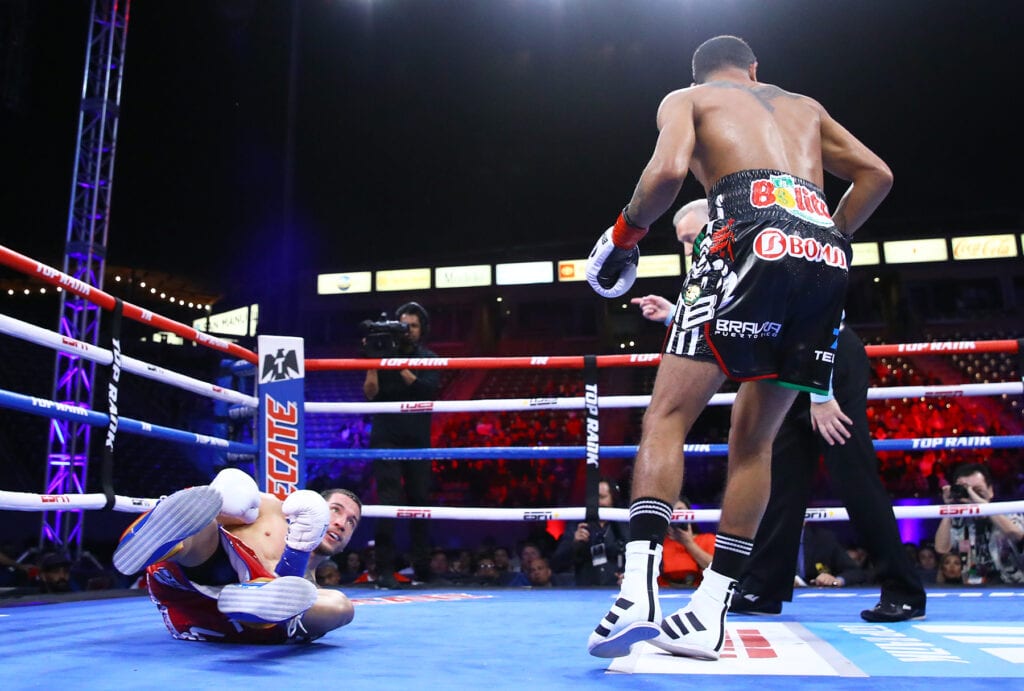 The main event that aired on Top Rank on ESPN saw Berchelt on a different level from Sosa in this defense. It was apparent on the broadcast and ESPN analyst Tim Bradley pointed it out that Berchelt was able to box and land around the guard of Sosa. While Sosa kept pressuring, Berchelt was able to land at will.

Berchelt (37-1, 33 KOs) knocked down Sosa (23-4-4, 16 KOs) in the second round and continued. Berchelt knocked Sosa down in the fourth round ultimately forcing a corner stoppage with four seconds left in the fourth round, ending the contest.

Berchelt has his eyes on lucky number seven, and former featherweight world champion Oscar Valdez next on his list.

“It was a great performance. I want to congratulate Jason,” Berchelt said. “He came to put on a great fight, and I have a lot of love for him.

“I want to wait until Valdez fights on Nov. 30. If he wants this belt, come and get it.”

And that’s it!!@AlacranBerchelt drops then stops Jason Sosa in the closing seconds of Round 4, making a sixth successful title defense on #DiaDeMuertos. #BercheltSosa pic.twitter.com/VueSD4dUwx

Molina KOs Okada in the opening bout on ESPN broadcast

Javier Molina (21-2, 9 KOs) seized the moment. The 2008 U.S. Olympian knocked down Hiroki Okada twice and scored the knockout only 65 seconds into the scheduled 10-round super lightweight fight. Molina knocked down Okada (19-2, 13 KOs) with a left hook in the opening minute, then finished things off with an overhand right.

“I caught him early. When I had him hurt, I jumped on him,” Molina said. “Whoever’s next, we want to go for a world title. I showed everyone what I’m made of. This was my moment.”