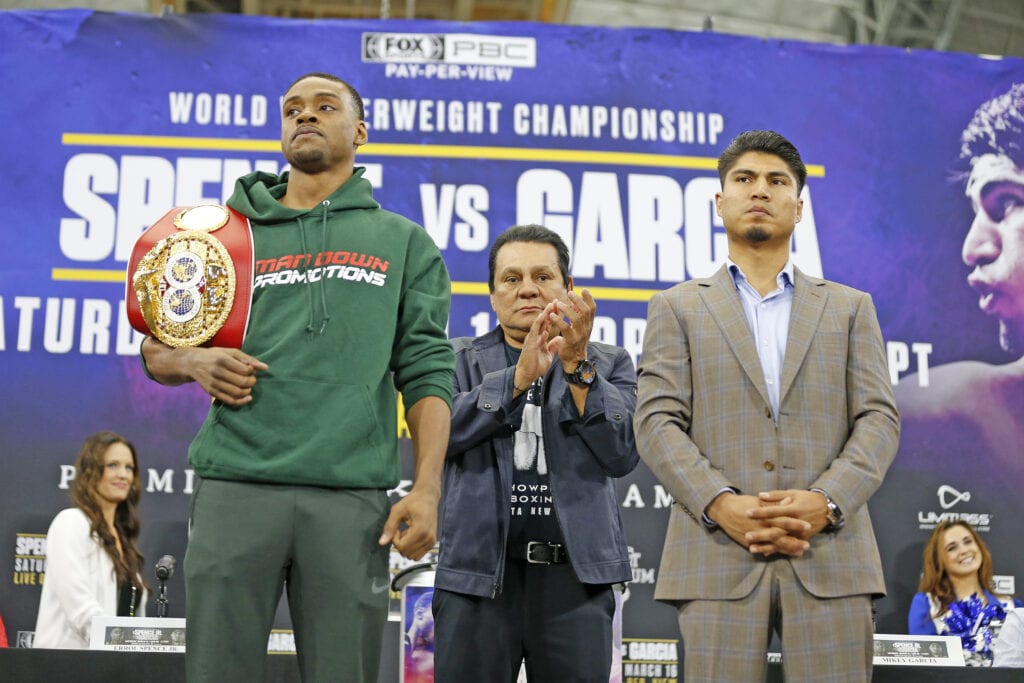 What to watch in Spence-Garcia Saturday showdown

Mikey Garcia is making his move. The pride of Oxnard, California, is recognized by boxing fans, as one of the best in the business, but widespread fame eludes him.

In a bid for greatness, Garcia (39-0, 30 KOs) is taking a risk rarely seen in modern boxing, moving up two weight classes to challenge Errol Spence Jr. (24-0, 21 KOs) for the latter’s IBF world welterweight title on Saturday night at the AT&T Stadium in Arlington, Texas.

The Challenge for Garcia

Garcia isn’t just fighting in Spence’s territory when it comes to weight class. Spence grew up in Texas, and he is sure to have the crowd behind him for the pay-per-view fight. It will be a defining fight in the careers of both men. Both are undefeated and occupy spots in “The Ring magazine Top 10 pound-for- pound” list.

Expectations are sky high with Garcia having won titles in 4 different divisions, and Errol Spence the welterweight boogeyman. The welterweight division is the premier talent division as it has been the last decade with its stunning array of talent and Spence sits atop the division beating his chest and wiping the welterweight slate clean. But, as things sit among the 147 pound elite, to lose a belt means you must defeat a great fighter to get your belt back.

The concern for Garcia

We will see if Mikey’s boxing IQ, speed, and technique will be enough to offset the power and strength of Errol Spence. Garcia has nothing to lose in this fight and all to gain. With an upset victory he will be a consensus top 3 pound for pound fighter and will add a fifth division world title to his mighty resume.

What’s on the line for the Champ?

Should Spence come out on top as most suspect he will, fans will shrug off the accomplishment by saying Spence was supposed to win. With a loss, he is no longer champion and takes a massive step backward in his career progression. But, a much bigger fight with the likes of Shawn Porter or Keith Thurman could be in his immediate future.

The tools and tactics that these two employ harkens all the way back to Sugar Ray Leonard vs. Marvin Hagler of the 80s, as the smaller man looks to dethrone a great champion.

Credit Garcia for moving up in weight- caliber of opponent
Anticipation for Canelo Alvarez- Daniel Jacobs builds
Advertisement
To Top
We use cookies to ensure that we give you the best experience on our website. If you continue to use this site we will assume that you are happy with it.OkPrivacy policy