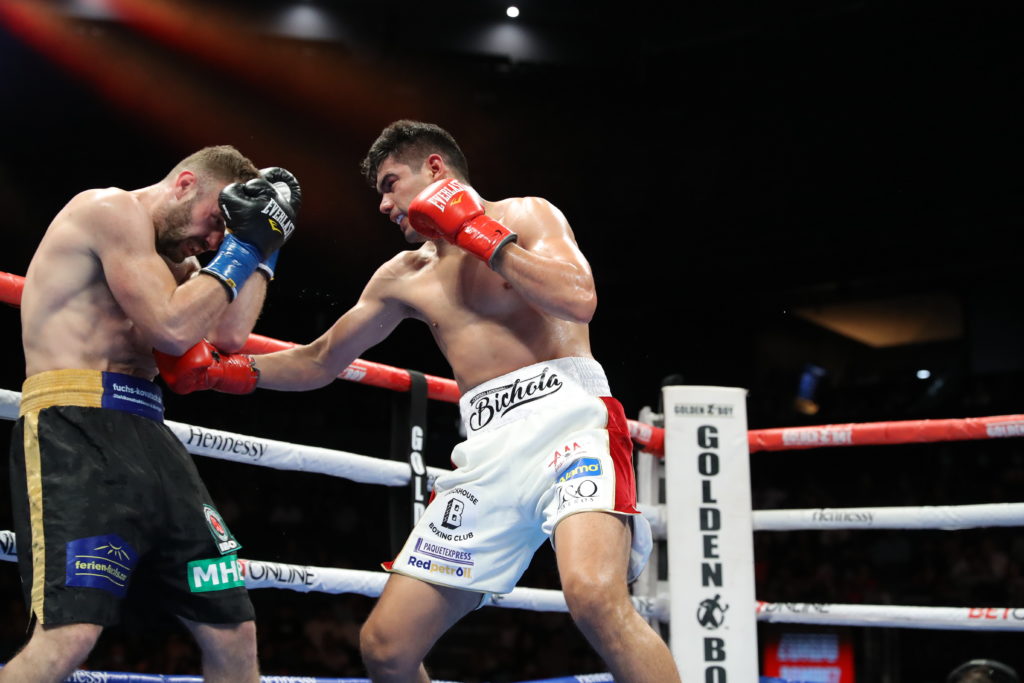 Unbeaten light heavyweight contender Gilberto “Zurdo” Ramirez wanted Saturday night to solidify his standing for a possible title shot down the road with WBA Champion Dmitry Bivol. And, in Ontario, California, ,Ramirez did just that with an impressive 4th round TKO over Dominic Boesel.

The bout closed out the Golden Boy Promotions/DAZN show with Ramirez scoring yet another impressive victory since moving up to light heavyweight,

Boesel goes down and they wave it off immediately!! @ZurdoRamirezz gets the win in the 3rd round! 👊💢#ZurdoBoesel | on @DAZNboxing pic.twitter.com/feiSswXmUq

Ramirez improved to 44-0, 29 KO’s and dominated the action almost from the beginning by stalking down the German Bozell. And, from early on, Zurdo was particularly scoring to the body with rights and lefts. Boesel was clearly being affected by the body punching, as early as the second round of the fight.

With Boesel, now 32-3, unable to mount much offense, he became an easy target and Ramirez staggered him back into the corner with a good left hook. Then, he quickly dropped him with a right to his rib cage and referee Thomas Taylor jumped in and stopped the fight at the 1:33 mark of the fourth after the knockdown.

“I feel great about my performance,” said Zurdo Ramirez in the ring to DAZN. “Like I said I was going to put a spectacular show here in LA. I got the victory via knockout. I was expecting his best, we were expecting heavy shots. I trained way to hard for this position and no one is going to take it from me. I used my distance more and I attacked the body more.

The victory has the 30 year Ramirez  in position, as the WBA’s number one contender at 175 lb. to potentially fight the Russian Bivol. Of course, Bivol just upset Canelo Alvarez to successfully defend WBA his title last Saturday night in Las Vegas. And, there is great speculation that the Russian might get a rematch as soon as this September or October with Alvarez.

However, if Canelo chooses instead to follow through with what had been contractually laid out for him to battle Gennady Golovkin next, then Bivol may now be fighting Ramirez next.

Meanwhile on the undercard for Golden Boy, lightweight contender William Zepeda remained undefeated by out slugging Rene Alvarado in a 10-round unanimous decision. The Mexican Zepeda, now 26-0, 23 KOs was the busier, more effective fighter throughout. But, Alvarado showed some toughness and actually got in some clean shots on Zepeda as the fight wore on.