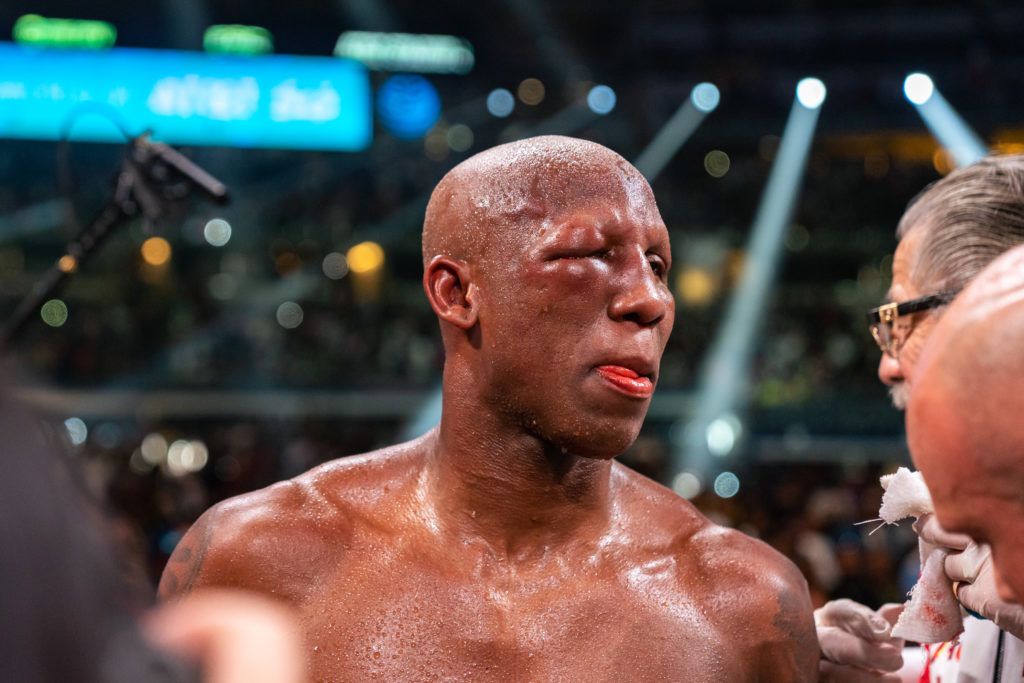 When knew when former WBA world welterweight champ Yordenis Ugas left the ring in Arlington, TX, Saturday night that now three belt world champ Errol Spence had likely broken Ugas’ his right eye socket in his TKO victory. And, on Sunday afternoon, the Cuban confirmed the injury in a post on social media.

Ugas stated on Instagram that he suffered the eye injury that required him to be hospitalized overnight,

“First of all I wanted to apologize for not coming to thank everyone who was supporting me in person after the fights, I have a fracture in my eye and in the next few days the doctors will say how they will treat it,” Ugas posted.

“Last night I spent all morning in a hospital and I write these words with only one eye, the other one is still closed. But very important for me to write it for you ❤️. I want to thank and thank my family, my team and every person who was supporting me. I want to congrats @errolspencejr , a great champ.. and sharing the ring with him was an honor, he came as always sharp, and in the last rounds he hit me in the eye and everything was even more difficult… the best man on top won From the ring. We have come this far by taking our wins and losses with humility.

“I am sad, but at peace. Come back from the dark. And already at this point I’ve fought amateur Crawford) Porter, Pacquiao, Spence some of the best fighters in history and future Hall of Famers. I’m proud of what I’m doing, in and out of the ring. I have won millions of hearts. With the favor of God there are great days to come… we will recover and come back stronger. Thank you all❤️. “

As we wrote late Saturday, Spence, now 28-0, 22 KOs, added the WBA championship to his IBF/WBC world titles at 147 lb. winning a slugfest in front of a partisan nearly 40,000 fans at AT&T Stadium in the Showtime Boxing/PBC pay per view main event.

Using tremendous bodywork and left uppercuts, Spence, now 28-0, 22 KOs, repeatedly scored throughout the fight on Ugas to build a commanding lead in the bout.

However, the fight had moments of high drama, including when the Cuban Ugas, who dropped to 27-5, scored a hard right hand on the Texan midway through the sixth round knocking his mouthpiece out. Then, he stunned Spence with another right along the ropes, but referee Laurence Cole briefly stopped the action and allowed Spence’s mouthpiece to be rinsed off and put back in.

That brief break seemed to give him enough recovery time to survive the rest of the round. And, from there Spence, known as “the Truth,” turned the heat back up to the body, again and with hard lefts to the head in particular.

It was apparent in the eighth round that Ugas’ right eye was swelling shut, and Cole had the ringside physician look at it in the middle of the round. However, he allowed the fight to continue.

But, fighting for the first time in 16 months, Spence only continued to pour it on, and, by the 10th frame it was obvious Ugas was a one-eyed fighter taking more punishment from the lefts to the head and the eye.

That’s when Cole stopped  bout for the second time to have the ringside doctor look at the Ugas eye, which had clearly swollen shut. The doctor shook his head “no” and Cole waved the bout off at the 1:44 mark of round 10, giving Spence the hard earned TKO win that he had very much wanted in this one.

Now, Spence is pointing to an undisputed title shot with WBO champion and fellow unbeaten Terence Crawford that could potentially take place this Fall.

As for the Cuban defector Ugas, who pulled a shocking upset of future hall of famer Manny Pacquiao last August to set the Spence battle into motion, he must now recover and hope to get back in the title picture down the road.