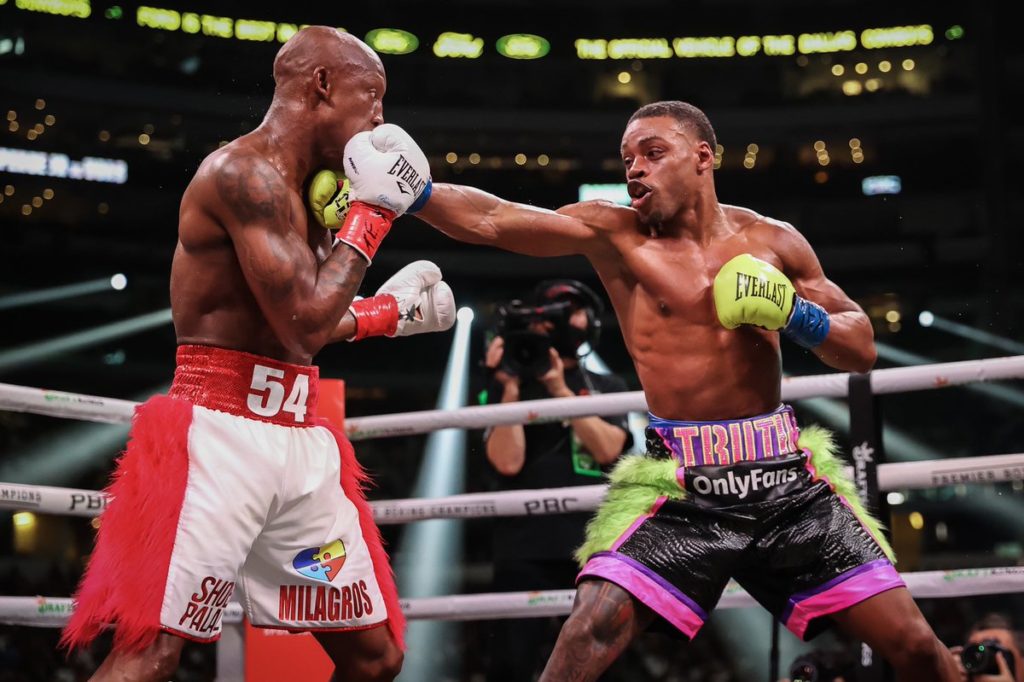 Errol Spence Wore Down Ugas For 10th Round TKO

Errol Spence was looking  for a statement win Saturday in his backyard to let the boxing world know that he’s one of the top fighters in the world. And, with a tremendous performance against a game fellow champion Yordenis Ugas, he got it.

The IBF/WBC 147lb. champ Spence wore down the WBA title holder Ugas, closed his right eye as the fight moved on and eventually, stopped him halfway through the 10th round for a TKO win that emphatically announces Spence is all the way back from previous injury.

Spence retains his titles and claims the WBA strap via TKO in front of a buzzing @ATTStadium 🔥 pic.twitter.com/PiO3oNRQ0Q

Using tremendous bodywork and left uppercuts, Spence, now 28-0, 22 KOs, repeatedly scored throughout the fight on Ugas to build a commanding lead in the bout.

However, the fight had moments of high drama, including when the Cuban Ugas, who dropped to 27-5, scored a hard right hand on the Texan midway through the sixth round knocking his mouthpiece out. Then, he stunned Spence with another right along the ropes, but referee Laurence Cole briefly stopped the action and allowed Spence’s mouthpiece to be rinsed off and put back in.

That brief break seemed to give him enough recovery time to survive the rest of the round. And, from there Spence, known as “the Truth,” turned the heat back up to the body, again and with hard lefts to the head in particular.

Spence was coming off the adversity of having a detached retina in his left eye that required surgery and cost him battling future hall of famer Manny Pacquiao last August. Instead, Ugas stepped in as the late replacement and upset Pacquiao on a 12 round decision.

That set this bout into motion for three of the four world welterweight titles.

It was apparent in the eighth round that Ugas’ right eye was swelling shut, and Cole had the ringside physician look at it in the middle of the round. However, he allowed the fight to continue.

But, fighting for the first time in 16 months, Spence only continued to pour it on in front of an announced crowd of over 39,000 at AT&T Stadium in Arlington, TX cheering him on. And, by the 10th frame it was obvious Ugas was a one-eyed fighter taking more punishment from the lefts to the head and the eye.

That’s when Cole stopped  bout for the second time to have the ringside doctor look at the Ugas eye, which had clearly swollen shut. The doctor shook his head “no” and Cole waved the bout off, giving Spence the hard earned TKO win that he had very much wanted in this one.

When asked about being stunned in the sixth? Spence admitted,

“I thought the ref said ‘stop.’ So, I had stopped. Then, he hit me with three or four shots. That was my fault. It was a rookie mistake. You’re supposed to protect yourself at all times.”

Spence had out landed Ugas decisively in power shots at 192-77 through the stoppage in round 10. And, he was comfortably ahead 88-82 on two and 88-83 on the third judge’s cards after nine rounds.

Crawford, who is now a promotional free agent, knows that there are no more obstacles to an undisputed bout with Spence and the two could be meeting this Fall in a massive showdown.

@ErrolSpenceJr congratulations great fight now the real fight happens. No more talk no more side of the street let’s go!!!!😉🤝