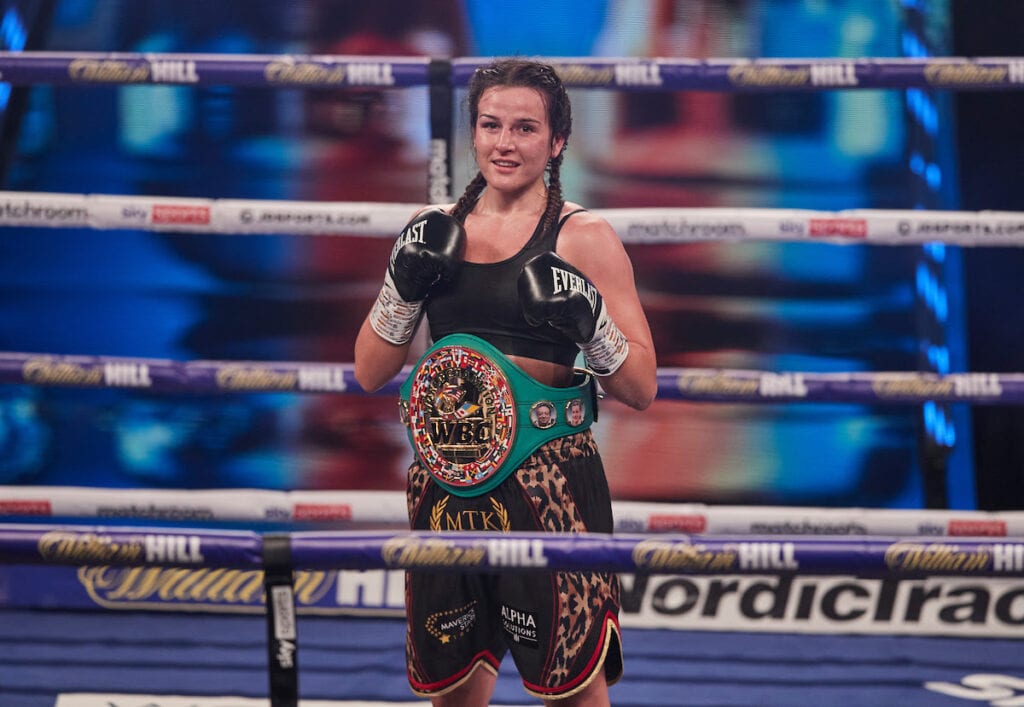 Matchroom Boxing, in partnership with DiBella Entertainment, announced that the Undisputed Super Lightweight crown will be put on the line, as Chantelle Cameron, Mary McGee, Kali Reis, and Jessica Camara will fight it out for 140-pound supremacy, live on DAZN around the world October 30 at the O2 Arena in London.

Cameron (14-0, 8 KOs), of Northampton, Northamptonshire, United Kingdom, displayed an impressive performance last time out in her maiden WBC World Title defense, beating former champion Melissa Hernández by TKO in the fifth round to retain the green and gold strap and continue her flawless record since turning professional in 2017.

“Merciless” Mary McGee (27-3, 15 KOs), of Gary, IN, comes into the fight with increased momentum, notching seven straight wins since her World Title loss in 2013 and picking up the IBF Super Lightweight Title along the way. Her last win came via a ninth-round TKO against Deanha Hobbs to retain her crown.

Matchroom Boxing will hold a series of fights on DAZN to crown an undisputed women’s junior welterweight champion. Chantelle Cameron (WBC champ) will face Mary McGee (IBF) in one bout while Kali Reis (WBA) will face Jessica Camara with the WBO title also on the line. Dates TBA.

“I’m delighted to have this opportunity to show that I’m the number one fighter in the world at 140lbs,” said Cameron. “All I’ve wanted since I started in boxing is to become undisputed, and now I have a fantastic chance to achieve that.

“These tough fights against the other champions are what motivates me and pushes me in the gym, and you’re going to see the very best Chantelle Cameron.

“They are all great champions, and, first things first, I have Mary McGee to take care of, and then, once I come through that, I’ll be ready to make history against the winner of Kali Reis and Jessica Camara.”

“I’m not here to hold belts to my arms like bracelets,” said McGee. “I want to beat the best fighters the world has to offer and build my legacy. I’m super excited about this tournament because it puts me in the ring with the best in the world where I’ve always wanted to be.”

“It’s about time,” said Reis. “I’m elated to be a part of this much overdue 140-pound tournament with such talented, hungry and strong women. This is the first of hopefully many ‘Road to Undisputed’ tournaments in female boxing. I’ve worked so hard for so long to be right here on this amazing stage to do what I love to do. I want to send a huge thank you to my promoter, Lou DiBella, for always believing in us and supporting women in the sport. This opportunity is at the peak of my career and I promise to bring the best version of myself to these fights. I’m sure all of us will be at our best. Also, a huge thank you to Eddie Hearn, of Matchroom Boxing, for raising the bar on boxing, in general, and for the opportunity to be a part of such a prestigious tournament to become the undisputed Super Lightweight champion.”

“This is an exciting time for women’s boxing,” said Camara. “I’m honored to be a part of an event of this magnitude that will help to bring a lot of exposure to the ladies. Kali, Mary and Chantelle are all great fighters, and I know these fights will bring out the best in me. Thank you to Lou DiBella and Eddie Hearn for coming together to make this possible and for providing a platform for me to show the world what I am capable of.”

“If we can work together to find one champion for every division then it would be a massive moment for the sport and we have a great opportunity to do that in the 140lbs division,” said Eddie Hearn, Matchroom Sport Chairman. “Women’s boxing is red hot at the moment and huge credit to these 4 champions for putting it on the line in the road to Undisputed on DAZN. Lou and I have been heavily committed to women’s boxing for a number of years now and it’s great to see them finally getting the plaudits and the rewards they deserve.”

“Both DiBella Entertainment and Matchroom have been leaders in advancing women’s boxing and elevating the great female fighters in our sport,” said Lou DiBella, President of DiBella Entertainment. “I’m happy that Eddie and I were able to arrange these historic fights and I’m grateful to my friends at DAZN, who will be streaming it. Chantelle, Mary, Kali and Jessica are four elite 140-pound athletes, deserving of this incredible opportunity. After two terrific semi-finals, a queen will be crowned at Super Lightweight.”

“What a way to crown the true 140lbs champion. We’re thrilled to feature on DAZN these two hugely competitive match-ups with four fearless fighters ready to leave it all in the ring for the undisputed crown,” said Joseph Markowski, EVP of DAZN. “We’re committed to growing women’s sport around the world and this elite four-way showdown will undoubtedly showcase to fans worldwide that women’s boxing is sensational as ever.”