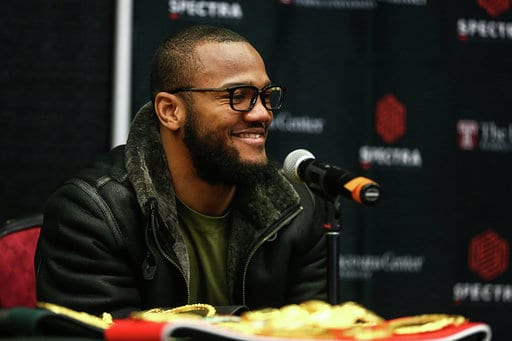 Williams sees him in challenger Rosario

Julian “J-Rock” Williams has a homecoming title defense to kick off the year against Jeison Rosario on January 18th. The unified champion at 154 Williams will be the main  FOX PBC Fight Night and on FOX Deportes Saturday, January 18, from Temple University’s Liacouras Center in Philadelphia.

Williams speaking to the media at his press conference last week in his native Philadephia, mentioned how his road to the title wasn’t an easy one.

“It took a lot for us to get the title. We had some bumps in the road,” Williams said to the media. But me and my team, we just kept battling and fighting through. We finally got our breakthrough fight and got the titles, and we wanted to bring the titles right back to Philadelphia. It’s amazing to have this opportunity to come back home and perform in front of my home crowd.”

Williams is coming off the early front runner for Fight of the Year against Jarret Hurd back in May. One of the bumps in the road to get to this homecoming match for Williams was to be an immediate rematch with Hurd which feel through as Hurd decided to move up to 160 pounds.

“Rosario is a really good fighter and I’m not just saying that,” Williams said. “They’ve been matching him tough and he’s been coming through fights he wasn’t supposed to win. I’m expecting a really tough fight and for him to be in shape. He’s got 36 minutes to change his life forever. I was in his exact same position very recently. It would be extremely arrogant for me to think I can’t lose.

“I watch a lot of boxing so I’ve seen this run that Rosario is on and I’ve seen his loss. He’s been on a good streak so I immediately knew this would be a good fight. I know he’s going to try to come and take my belts.

The one thing that Williams noted in the presser is that he saw a lot of him in Rosario.

“I can see the look in his eye and it reminds me of the look I had in my eye earlier this year against Hurd,” Williams said. “I know he’s got a game plan to beat me, so I have to be fully prepared.”

Who’s next for Anthony Joshua?
Charlo to Andrade- ‘He know how to get over here’
Advertisement
To Top