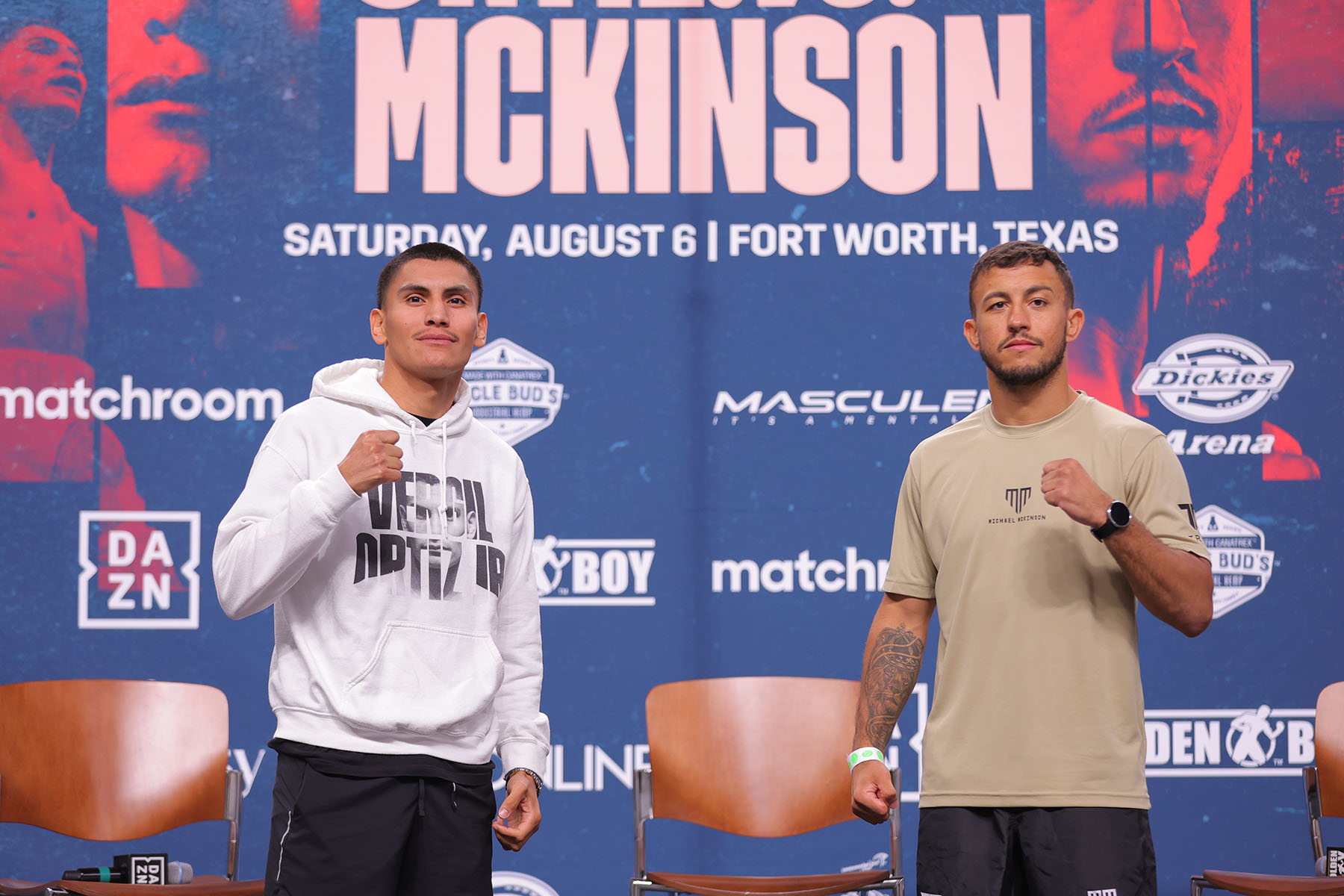 Welterweight contender Vergil Ortiz Jr. has decided to take a glass-half-full view of being out of the ring for what has been a difficult past year.

“Fortunately, time is on my side,” Ortiz said. “I’m only 24 years old, and at the same time, I don’t want to be wasting time. You know what that’s like. I should have fought three or four times already, and that’s time we won’t get back.

“So, I try my best to remain optimistic about any scenario, no matter how negative it is. But overall I feel very happy. I’m very excited to be back in the ring and ready to put on a great show for the fans all across the world.”

Ortiz will be back in action for the first time in 51 weeks when he squares off against British southpaw Michael McKinson in a 12-rounder that will headline a Golden Boy Promotions card on Saturday (DAZN, 9 ET p.m.) at Dickies Arena in Fort Worth, Texas, a home region fight for Ortiz, who is from nearby Grand Prairie.

The fight took on added significance this week when it was upgraded to title eliminator status. According to Golden Boy, the winner will become the mandatory challenger for WBA “regular” titlist Eimantas Stanionis (14-0, 9 KOs).

“I am grateful for this fight to be an eliminator,” Ortiz said. “It’s just closer to a world title shot.”

Added McKinson: “Knowing that this is now a world title eliminator adds more fuel to the fire. This is just the cherry on top.”

Last August, Ortiz scored his most significant win when he knocked out former world title challenger “Mean Machine” Egidijus Kavaliauskas in the ninth round. Kavaliauskas’ only previous loss was by ninth-round knockout to Terence Crawford challenging him for his welterweight world title in December 2019.

Ortiz was initially supposed to fight McKinson in January but the date was pushed back to March 19 in Los Angeles. Then Ortiz was forced to withdraw. Five days before the fight, he was hospitalized in Los Angeles and diagnosed with rhabdomyolysis, which occurs when damaged muscle tissue releases proteins and electrolytes into the blood. It can damage the heart and kidneys and in the most severe cases cause death.

Once Ortiz (18-0, 18 KOs) was ready to fight again, Golden Boy tried to match him with David Avanesyan (29-3-1, 17 KOs), a Russian fighter based in England. Golden Boy thought it had a deal but when Avanesyan’s team did not return the paperwork as promised — and it dragged out for a couple of weeks — Golden Boy moved on and circled back to McKinson.

“We were supposed to fight in January, so I was getting ready before that. We were basically in full camp mode right before that,” Ortiz said. “When I train, I’m like 110 percent. My body was going as hard as I could possibly go. Unfortunately, we didn’t fight in January. We set a new date in March and I think with just all those months of just back-to-back with non-stop training, my body just couldn’t take it anymore. This time we had no fall-throughs with the schedule, and this time my body feels great, and we’re ready to go.

“Michael McKinson is ranked by the WBO. He’s undefeated. It would look good on my resume if I defeat him. He’s a good fighter.”

“This fight has been a long time coming,” McKinson said. “Originally, I was told I would fight Ortiz, Jr. in January and then it was moved to March. Then due to unfortunate circumstances, the March fight couldn’t happen. But I just want to give a big thank you to Golden Boy and Team Ortiz Jr. for giving me the opportunity again. I know I am coming to the lion’s den, and I promise my family and team that I will not disappoint them.

“I believe in myself, in my hard work, in my rise. I have worked myself the hard way and I deserve my opportunity.”

Ortiz, however, is a huge favorite at -2,000, according to the BetUS line. While not taking anything for granted, Ortiz is just happy to be back in the ring.

“I’m just ready to fight,” he said. “It’s been like a year. It sucks that a lot of things happened within that year, and it’s taken a full year to come back around, but hopefully, after this fight, everything’s back on schedule.”