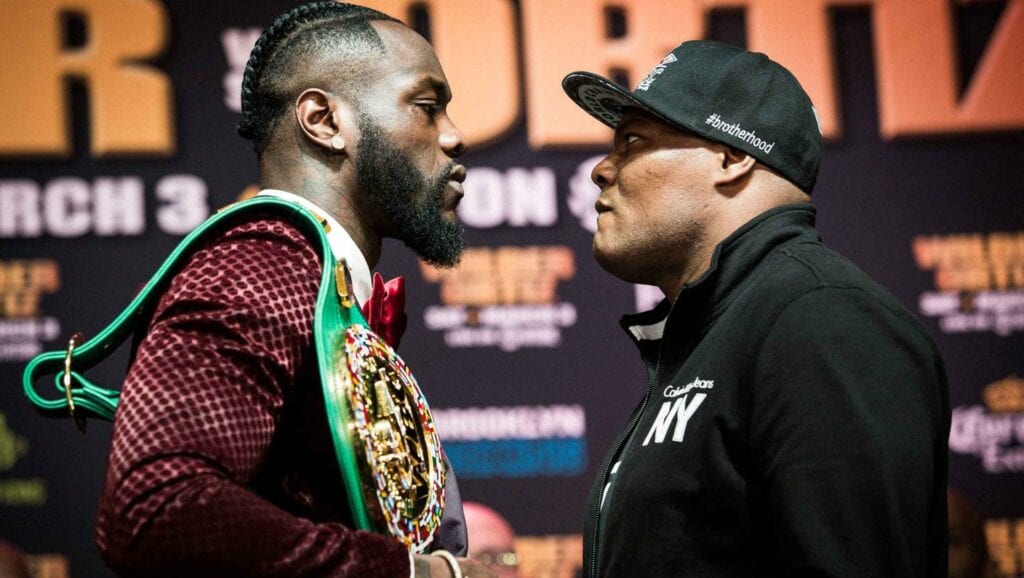 Deontay Wilder is slated to face in a rematch Luis Ortiz in November, and while this matchup isn’t the much-anticipated rematch with Tyson Fury, the WBC Champion realizes that this is going to be a tough matchup.

Despite the age of  Ortiz, Wilder still feels that Ortiz is a threat in the heavyweight division.

“Luis Ortiz is a dangerous fighter,” Wilder told BoxingScene.com. “That’s why a lot of these guys at the top don’t wanna fight him. So, he has no choice but to fight a lower caliber of fighters.”

“We’re getting close,” Wilder said to Boxingscene regarding finalization of the deal. “We’re narrowing it down to a couple things. It should be announced very soon. It’s just the very small, minor stuff. Everyone is gonna be pleased when it happens. It’s gonna be a special fight.”

Wilder: Ortiz Is Dangerous; That's Why No Wants To Fight Him https://t.co/R4AMEMvfck pic.twitter.com/Gogu3MHFDh

Ortiz this year was one of the front runners to take on then-champion Anthony Joshua back in June once Jarrell Miller was caught using PEDs and eventually had his license revoked. Ortiz and his handlers turned that fight down one short notice with the likelihoods that he would be able to rematch Wilder in a contest they had in 2018. That fight honor instead went to Andy Ruiz Jr. who would go on to win at Madison Square Garden in June.

In the first match, Wilder had some trouble in the middle rounds against Ortiz before stopping him eventually in the 10th round in their contest at Barclays Center in March of 2018. He feels that age that is downplayed too much when it comes to fighters.

“Ortiz, you know, when I look at the landscape of things, and I’ve been observing how other fighters, they talk about him in a negative way, as far as his age,” Wilder said to Boxingscene. “But none of them wanna get in there and test him. We’ve seen in this sport many times that age is only but a number. That keeps proving itself over and over again. Look at Bernard [Hopkins]. Look at Manny [Pacquiao]. I never would’ve thought he would’ve come out with a performance like that, with a Keith Thurman.

“So, age ain’t nothing but a number. It takes a certain caliber of fighter to get another fighter up. And everybody gets up for Deontay Wilder, because they know it’s not a regular fight. Your life really is on the line each and every time with me. I make that loud and clear to those that are listening. So, you have to get up for me.”

This bout will be the match that Wilder has before we see if they finalize the details of the rematch with Fury next year, while Fury is slated to take on Otto Wallin on September 14 in Las Vegas.

MTK Global to return to Dubai in September
Josh Warrington after Takoucht wants the best at 126
Advertisement
To Top
We use cookies to ensure that we give you the best experience on our website. If you continue to use this site we will assume that you are happy with it.OkNoPrivacy policy