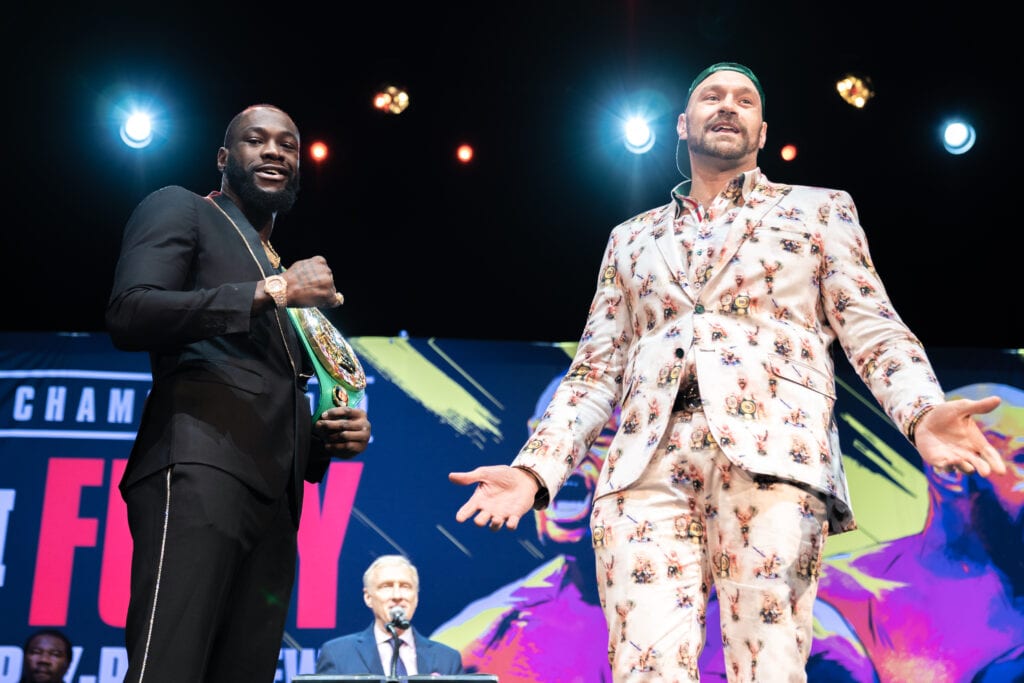 Wilder and Fury met on media stage Monday prior to rematch

The hype is on for February 22nd and the rematch for WBC Heavyweight Champion, Deontay Wilder and former Undisputed champ, Tyson Fury. And in Los Angeles on Monday, they were mostly behaved promoting the upcoming about.

The two fighters and their management teams were on the same stage at the Microsoft Theater in downtown Tinseltown:

Wilder talked about unfinished business from having knocked down Fury late in their first battle in December of 2018 but not finishing the job,

“My body feels like its walking into the sixth week of camp instead of the third week. It’s been amazing to have the quick turnaround after the Ortiz fight in November. I’m coming in shape. I put shape on top of shape and it’s allowed me to prepare even harder for Fury.

“We all know in rematches I’m always sharp because I’ve been in there before,” Wilder continued. “And I know what my opponent is capable of doing and what they plan on doing. I’m prepared more than ever for this fight.

“I knocked him out the first time we fought. I told him two years ago I was going to baptize him. Rising up is part of the baptism. But this a different story This is unfinished business. Because he’s in WWE I’m going to make sure he gets knocked out of the ring, I might even come down with a flying elbow from the top rope.”

Meanwhile for Fury, he gets a second opportunity at pulling off the upset and handing water a potential first career loss. He was his usual high-energy promotional, self while on stage,

“The consensus is either he knocks me out, or I win on points. Usually when people have that opinion, it goes the opposite way around. Expect him to box and me to be looking for the knockout.

“He thinks I’m going to come out herky-jerky with my famous style, but I want him to meet me in the center of the ring and have a slugfest, best man wins. I didn’t have the gas to finish him in the last fight, but this time I can turn that screwdriver until he’s gone.

Let’s make it a Marvin Hagler vs. Tommy Hearns type of fight,” Fury continued.  “I’ll meet you in the middle of the ring on February 22. Just watch out for the right hand, because you’re going to sleep in two rounds.

“We finally have the rematch and I can’t remember a bigger heavyweight fight in a long time. Maybe Lennox Lewis vs. Mike Tyson was the last big one like this and that was another U.S. vs. U.K. showdown.”

Most believe that Fury won the first fight, but the decision was clouded when Wilder scored a dramatic 12-round knock down with a right-left combination with more than 1:30 left in the fight. Amazingly, Fury was able to withstand Wilder being able to follow up, damage him and stop the battle.

Wilder has been devastating in his championship professional career with rematches, as he destroyed Bermane Stiverne by first round knockout in their second fight in November 2017. Then, back two months ago, followed up a 10th round TKO win from 2018 over Luis Ortiz with another one punch devastating 7th round KO to retain his belt for the 10th time.

As for Fury, he has one rematch as a pro and it came in November of 2014, when he defeated fellow British heavyweight contender, Derrick Chisora by 10th round TKO in November of 2014. One year later, he upset Undisputed Champ Wladimir Klitchsko by 12 round decision.

However, Fury vacated all the belts and went inactive for three years. The Wilder fight in 2018 was his third of his comeback.

The rematch will be jointly produced by Top Rank Boxing and Premier Boxing Champions while being shown on both  ESPN and Fox pay per view.

It is easily the most anticipated heavyweight title fight of the last 10 years and may be even bigger, once we approach late February

Golden Contract Light-heavyweight semis announced
Fury wants to make it a slugfest?
Advertisement
To Top
We use cookies to ensure that we give you the best experience on our website. If you continue to use this site we will assume that you are happy with it.Ok