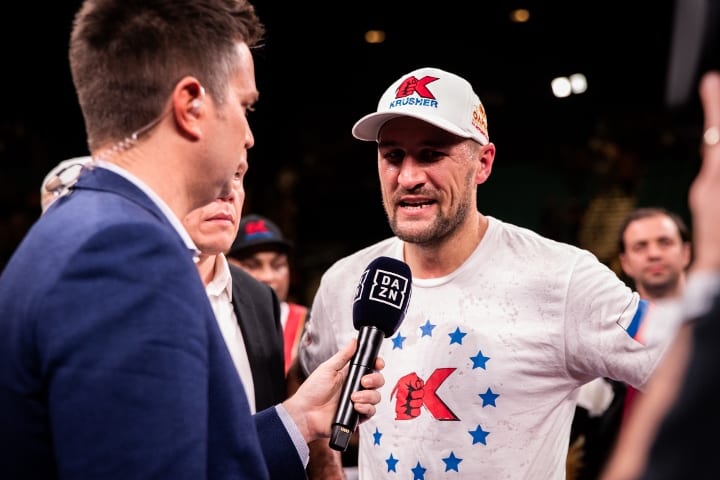 What Does Sergey Kovalev Still Have Left?

Former three-time light heavyweight titlist Sergey Kovalev, once one of the best and most feared fighters in the world, is ready to see what he has left in the twilight of his career.

🗣 “Kovalev is the best opponent I’ve ever had in the professional ring.” Tervel Pulev is ready for the challenge on Saturday night 🔥 #TrillerVerz5 @thekiaforum🎟 https://t.co/r3dcZ6weNI pic.twitter.com/TwKPaPhyW4

Kovalev (34-4-1, 29 KOs), a Russia native fighting out of Long Beach, California, has not boxed, since Canelo Alvarez brutally knocked him out in the 11th round to take his WBO 175-pound title in November 2019. A January 2021 return fight against Bektemir Melikuziev was scrapped when Kovalev tested positive for synthetic testosterone, and there were also legal issues.

“My motivation to keep going? First is money,” Kovalev said with a laugh. “And money is energy. Second is my son. I want to become world champion once again so he can see that ‘don’t ever give up.’ Right now, it is all for my kids. I tell them and show them to follow your dreams and your dreams will come true. If I ended my boxing career right now, I would feel uncomfortable for the rest of my life.

“Since I lost my title to Canelo, I am not on the top. Since I changed to cruiserweight it has changed everything. Most importantly I don’t have to worry about losing the weight. Actually, the last two years fighting at light heavyweight, and making 175, was miserable for me.”

Kovalev recalled the craziness of the Alvarez fight night.

“The night of the Canelo fight, we are at the door to begin the ring walk and a fella with a headset came to us and said, ‘we are not ready, we have to wait for (the UFC card) to finish,’” Kovalev said of DAZN’s decision to delay the ring walks until the finish of the competing event. “We waited for another hour. An hour! I went to the corner after round seven and I said to (trainer) Buddy (McGirt), ‘Buddy, I am spent, totally.’ Now I feel fresh. Making 175 was killing me. I was at the point either quit or move up in weight. Now I can eat everything at any time.

“This is a new step in my boxing career. I plan to fight a couple more years. No more than three years. I am not sure how many fights it will take to get a title. But if I win a title next year, then I will stop. How long will it take to get a title shot? It could be a two- or three-year wait, but we will see. I can fight into my 40s no problem. I just had two years off. I am fresh.

“But on the other hand, after (Saturday), if Jake Paul wants to fight, I will be ready, and I will knock him out.”