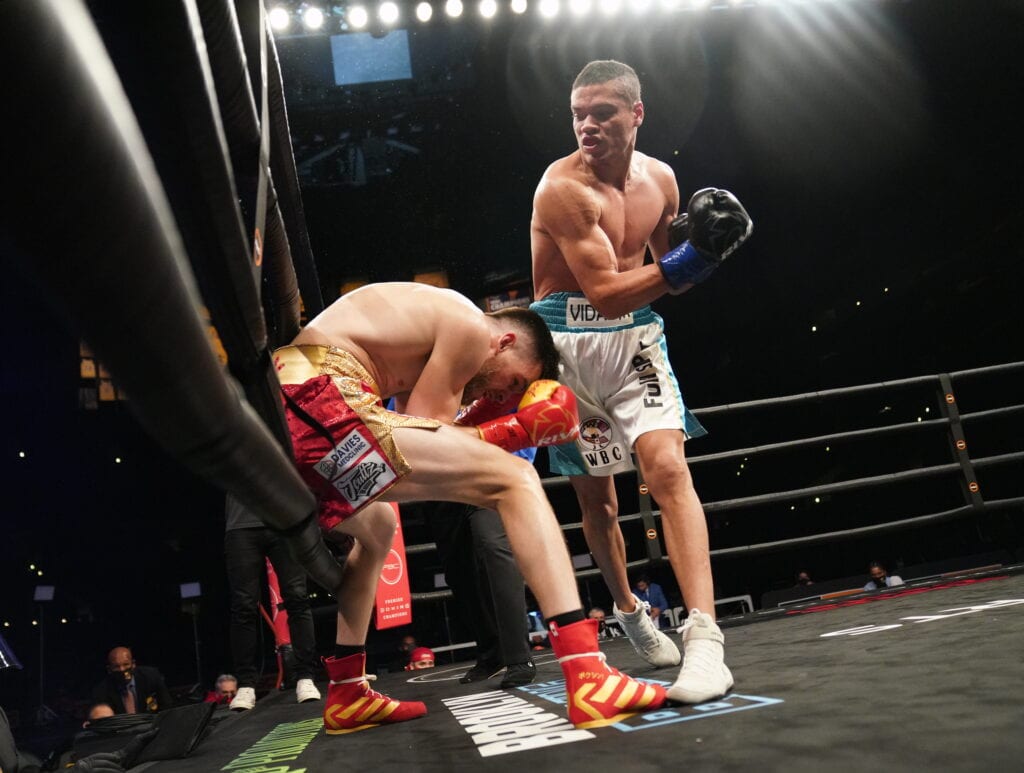 Unbeaten middleweight Amilcar Vidal (12-0, 11 KOs) impressed with a quick second-round knockout of previously undefeated Edward Ortiz (11-1-2, 4 KOs) on Saturday night in the main event of FS1 PBC Fight Night and on FOX Deportes from the STAPLES Center in Los Angeles.

The 24-year-old Vidal, from Montevideo, Uruguay, and now fighting out of Coachella, California, came alive after a tentative first two minutes and started landing hard left hooks to Ortiz’s right side.

Early in round two, Vidal landed a stiff counter right hand that wobbled Ortiz and the Uruguayan made the most of it, by landing an extended series of power punches with both hands. With Ortiz seemingly still lucid but offering no offense back for almost a full minute of being pummeled, referee Edward Hernandez Sr. was forced to wave it off at 1:58.

Vidal Stuns Ortiz with a big right hand and steps on the gas!!!! ???? #VidalOrtiz #PBConFS1 pic.twitter.com/TrffrWeHAn

“I trained for this and I knew when he felt my punches, it would be over,” said Vidal. “I worked very hard to perform the way that I did tonight.”

Vidal threw 72 punches in the brief but brutal encounter according to CompuBox, landing 32 punches, including 30 power shots. Ortiz threw 62 punches back, but only landed seven.

In the co-main event unbeaten cruiserweight Efetobor Apochi (10-0, 10 KOs) kept his record perfect by dropping Leesburg, Virginia’s Joe Jones (11-3, 8 KOs) three times and stopping him at 0:51 of round three.

However, moving in for the kill, Apochi was briefly shaken by a surprising Jones right hand that allowed him to last through the round.

The respite was brief, however, as early in round three, Apochi and Jones collided heads and Jones folded to the canvas holding his head. Jones rose before being counted out but failed to answer referee Thomas Taylor’s follow-up questions adequately. Taylor waved the one-sided fight over as a TKO 3 for the Nigerian slugger.

Apochi takes it to the body and sends Jones to his knees for the 3rd time tonight! #ApochiJones #PBConFS1 pic.twitter.com/ysgnJfc330

“I already know when I face guys in the cruiserweight division, they are going to run away from me,” said Apochi. “They see my knockout record and they know I’m a big puncher, so they want to run around.”

The battle between former sparring partners both making their television debuts featured ebbs and flow with close rounds throughout.

Correa came out firing from the opening bell and established a superior work rate early, running up a 49-21 advantage in landed punches after two. Bigger and stronger, Arredondo came increasingly to life in the third, fourth, and especially fifth rounds, coming forward behind thudding hooks to the head and body. In response, Correa began to show signs of wear by fighting with his hands down and pulling straight back from punches.

Correa righted the ship with a strong sixth round, sharpshooting from the outside with his superior speed, but Arredondo responded in the seventh by stifling Correa’s offense and coming forward relentlessly. A visibly fatigued Correa seemed relieved to hear the final bell, as Arredondo was landing with effective frequency in the eighth, his strongest round of the fight.

Explained as a result of an error with the scorecards as the judges filled out the wrong ones, Arredondo was first announced as the winner of a majority decision before the fighters were brought back to the ring and the outcome was announced with Correa as the winner.