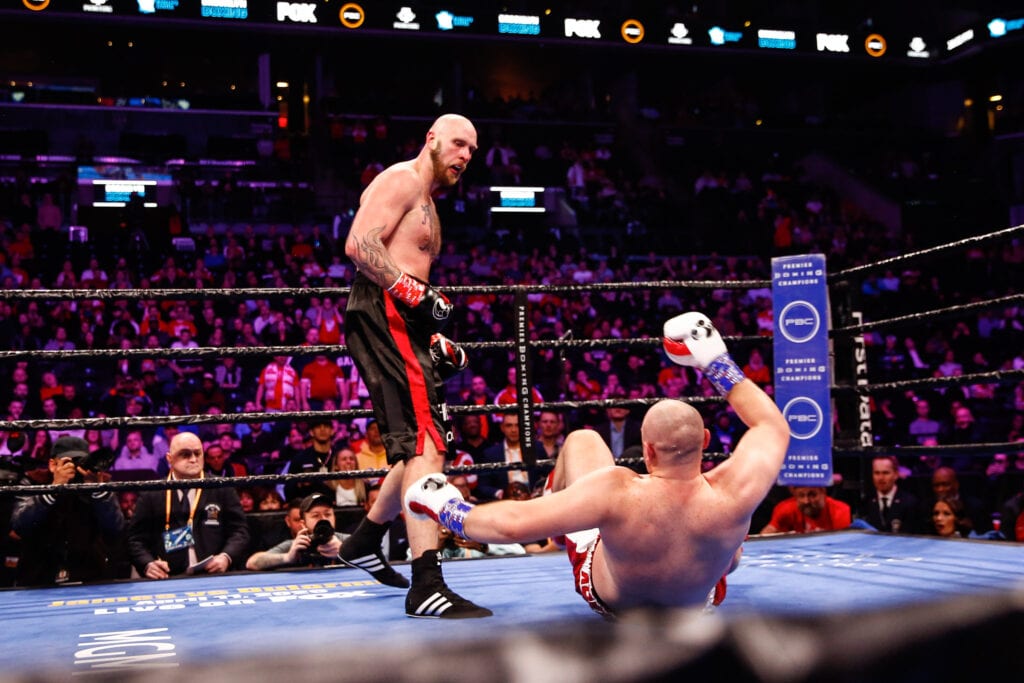 Heavyweight boxing is just different and especially, when big punches are being thrown. And, unbeaten Polish American heavyweight Adam Kownacki found out the hard way being stunned in a TKO loss Saturday night in front of thousands of his supporters in Brooklyn, New York.

The bombs were flying early in this fight with Kownacki getting the better of the 36 year-old Helenius and the crowd of more than 9,000 mostly Kownacki fans roaring for him in his adopted home area.

Kownacki, who immigrated from Poland to the U.S. as a teenager, repeatedly landed his trademark hard straight right hand, but much like in his previous fight last August with veteran Chris Arreola, he couldn’t put much else behind it to take advantage.

At the same time, Helenius, now 31-3, was scoring big punches of his own in the second and third rounds, also with a straight right hands and eventually, lefts behind them.

That’s when the fourth round began with Kownacki backing Helenius up again, scoring with several big punches and drawing blood from his nose.

But, suddenly Helenius turned the momentum quickly, and for good, with a couple of big shots. He actually landed a hard short right hand that dropped Kownacki, but referee David Fields apparently didn’t see the punch and ruled it a slip. Take a look here:

And shortly after, Kownacki looked stunned and wobbly, but still came back at Helenius, only to be quickly dropped on his back this time with a hard right and a left behind it.
.
Kownacki rose wearily, but was obviously in the most trouble of his professional career. And, Helenius quickly finished him with a barrage of hard rights and lefts with Kownacki not really able to fire back or defend himself.

Fields jumped between the fighters and stopped things at 1:07 of round four with much of the crowd at the Barclays Center gasping in disbelief. Kownacki had reportedly been as much as a 20-1 favorite by a couple of online bookmaking sites for this one and was expected to win easily Saturday night.

Helenius had won two of his last three fights by knockout before Saturday night, but he had also lost last July to American Gerald Washington by KO in Minneapolis, Minnesota. Helenius also lost a WBC Title Eliminator fight to Britain’s Dillian Whyte by decision in October of 2017.

Kownacki had landed more effective punches through round three and actually, landed 55 total power punches for the fight to just 36 for Helenius.

Kownacki came in riding high, as a top-five heavyweight contender in the three major organizations for the  championship, but Helenius is to be credited that none of that bothered him. And, he landed the bigger punches that mattered in the fateful 4th round.

“I want to thank everyone involved that let me box here (Brooklyn). Kownacki, he’s a ‘tough cookie,’ though. He’s a tough fighter. Our hard work paid off,” Helenius said to Fox Sports in the ring post-fight.

He was ‘just keep coming. Just keep coming.’ He’s a good boxer. I got to give it to him. I also got lucky with a few hard punches. But that’s my strength: to punch back, when people come.”

Helenius certainly did that on Saturday night, and for the second time in two weeks, a prominent PBC Heavyweight (Deontay Wilder) has suffered his first loss by a KO in their main event.

And just like Wilder, it’s back to the drawing board for the hard-punching Kownacki.