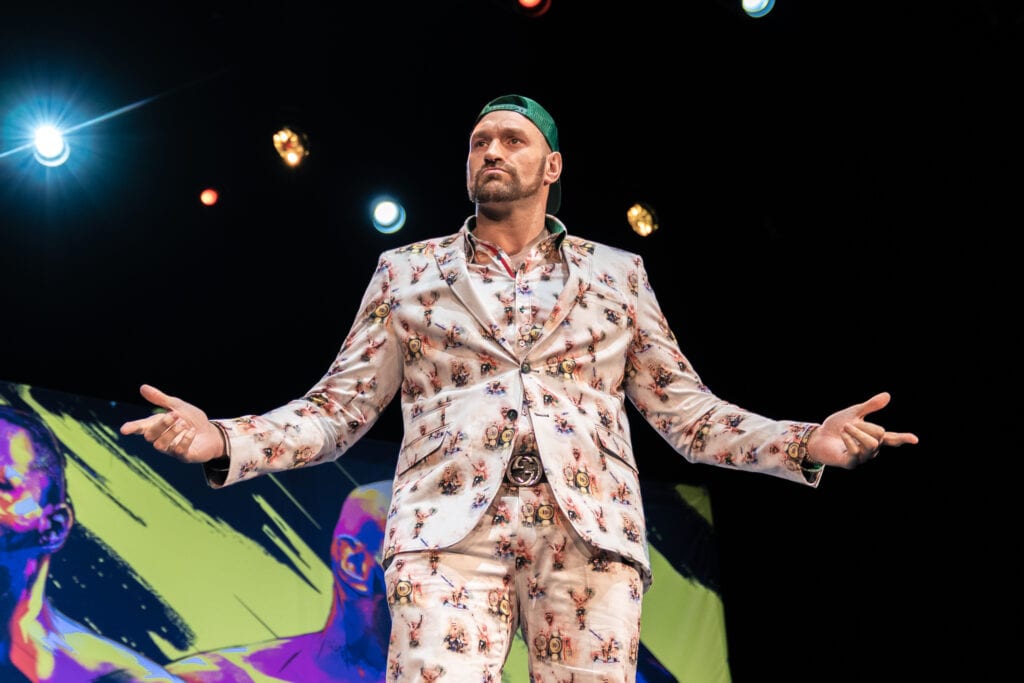 WBC Heavyweight champion Tyson Fury has turned up the public pressure for his third fight with the man he beat for the title back in February.

This, as Fury gave on-the-record comments to the Athletic Sunday night that he believes he has the right move on from fighting Deontay Wilder again, because the bout will apparently not happen by the end of December,

“I was looking forward to smashing Wilder again. A quick and easy fight. But Wilder and his team were messing around with the date. They don’t really want to fight the lineal heavyweight champion. They know how it ends. The world knows how it will end: with Wilder on his ass.”

The third fight in the trilogy has been delayed due to the Covid-19 pandemic shutting the sport down for three months earlier this year. Further, Fury’s co-promoters Frank Warren of Queensberry Promotions and more importantly, Bob Arum of Top Rank Boxing, had pushed the proposed October date of the second rematch back to December.

This was to be able to hold it at the Las Vegas Raiders new Allegiant Stadium and have least 10,000 fans or more that could be socially distanced. Thus, creating millions of dollars with a live gate.

Arum announced two weeks ago that Top Rank, Premier Boxing Champions, ESPN and Fox Sports and the venue have been unable to secure a Saturday night that works for all parties. This is in part due to college football in the U.S. changing it’s schedule and delaying the playing of several significant championship football games from December 5th to the key December 19th date of the proposed Fury/Wilder. ESPN will produce and televise three of those championship games throughout the afternoon/night.

That December 19th date is also on a weekend where the Raiders aren’t playing a home game in the stadium, as they are the previous two weekends.

On Saturday night, Warren joined in on pressuring for the fight either happen in December or be called off,  when he proclaimed Fury-Wilder fight was not going to happen. And, that Fury would be free to move on and fight someone else in December or January before awaiting Unified champ, Anthony Joshua, later in 2021.

'I DON’T SEE THE FIGHT WITH WILDER HAPPENING THIS YEAR – SO TYSON SAID LET'S KNOCK IT ON THE HEAD!' ?

Joshua’s promoter, Eddie Hearn of Matchroom Boxing, officially announced Saturday the WBA/IBF/WBO’s equally long delayed title fight with Kubrat Pulev will be held December 12th. However, even though the fight will be in the O2 Arena in London. it’s still unclear, if some fans would be present?

The former Undisputed champ, Fury and Joshua have also reportedly agreed to fight each other in 2021 provided that they each win their next bout.

Of course. the Joshua announcement and Warren’s comments about Fury fighting someone else next brought a quick response from Wilder’s co-promoter and spokesperson, Shelly Finkel.

He quickly told multiple media outlets this weekend that the contract they have with Fury is binding for another rematch and it’s still on schedule to take place either in December or January.

Fury recaptured a portion of the heavyweight title in February with a 7th round TKO over Wilder handing him his first professional loss. That fight was a rematch of a controversial draw that ended their first battle in December of 2018.

Wilder held the WBC belt for five years and 10 successful defenses before the Fury loss. Both fighters had contractually agreed to a rematch clause that could be exercised by either one of them. And, Wilder chose to do that less than two weeks after his loss early this year.

One of the biggest factors as to why this fight will still take place is both participants are apparently guaranteed a staggering $30 million dollars as part of the deal through Top Rank, Premier Boxing Champions and the television networks ESPN and Fox.

Those two will jointly produce and show the pay-per-view of their third fight, again, whenever it finally happens.

A PBC source repeated to Big Fight Weekend recently that there was “absolutely no chance” that Wilder was going to step-aside and not take the $30 million guaranteed pay day for a third fight with Fury and attempt to get his title back.

Further, complicating things on Wilder’s side was the confirmation last weekend from Finkel that Wilder has parted ways with his longtime trainer of the last seven years, former World Welterweight Champion / Olympic Gold medalist, Mark Breland.

Wilder had initially defended Breland early this year for having stopped the February fight with Fury by throwing in the towel in the seventh round against his wishes.

A bloodied Wilder had been trapped in the corner by Fury landing a couple of significant punches, when Breland threw the towel and referee Kenny Bayless stopped the fight. Wilder could immediately be seen after the stoppage angrily yelling at Breland along the ring apron “Why did you do that? Why did you do that?”

Wilder further followed up in the aftermath of the fight saying that he had instructed Breland and his other longtime trainer, Jay Deas, that they were never to stop any fight of his, under any circumstance, if he was still upright and able to throw punches.

With Breland out of the picture it is expected that Deas, who was Wilder’s exclusive trainer for the first half of his career. will take a more prominent role once again in training Wilder for the third fight. And, the former champ will also utilize former heavyweight contender, Malik Scott. Scott, who was kayoed by Wilder in just one round in 2014.

Scott has been working with Wilder’s camp for the last couple of years, including as a sparring partner.

Back to Fury, for all of the public P.R. pressure they’re attempting to put on Wilder side and obviously, specifically on Arum to come up with the firm date and the site for the third fight, he also must concede  that the biggest mega-payday that’s out there in the short term is to fight Wilder, again.

And, Wilder isn’t going to go without a huge legal battle (for 30 million reasons,) if he tries to fight someone else.