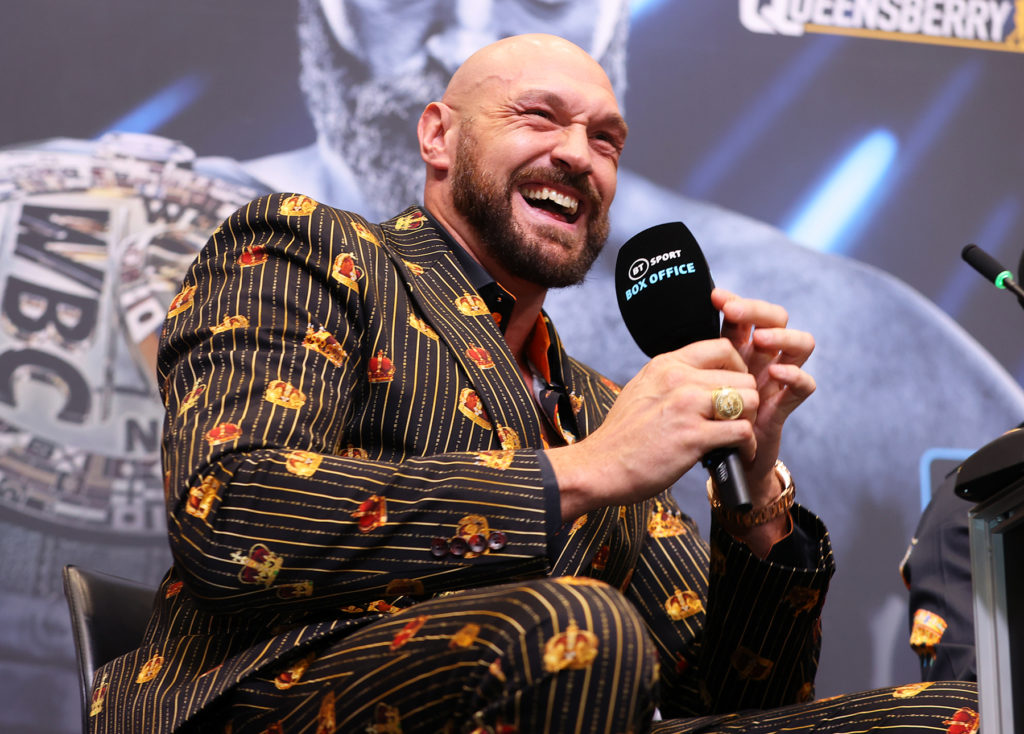 It looks live Tyson Fury’s “retirement” from Boxing this Summer (that no one believed) is over and further, the WBC champ and self-professed “Gypsy King,” says his ring return will be to fight fellow English Heavyweight Derek Chisora for a third time.

Fury took to social media Tuesday afternoon in the U.K. to tell his fans and boxing media/observers that his third WBC title defense is going to be with Chisora and likely late this year. Saying to Chisora in the video, “I spoke to your team. Everything is sorted, looking good. Contract will be over to your team in the next day or so.”

Fury also broke the news that after using Sugar Hill Steward, the nephew of the late legendary, hall of fame trainer Emanuel Steward, for his last two fights/KOs of Deontay Wilder, he’s going to have another trainer for the proposed Chisora bout using longtime coach and Fury friend, Issac Lowe,

Fury, 32-0-1, 23 KOs, was last in the ring in April scoring a thunderous KO of Dillian Whyte before a record U.K. crowd of 94,000+ fans at Wembley Stadium. He had continued to maintain that he was done with boxing, but again, not many took that seriously.

As for Chisora, 33-12, 23 KOs, he’s been around as a contender/opponent for a myriad of heavyweights, having lost to Dillian Whyte twice, Anthony Joshua, Oleksandr Usyk and even, Fury twice prior. This, as Fury stopped Chisora in the 10th round in November 2014 and earlier in their careers, Fury won by 12 round decision July 2011.

ESPN’s Mike Coppinger reported Tuesday that a source told him that Cardiff, Wales is the preferred location for Fury’s latest defense with the bout to be at the Principality Stadium outdoors and the bout is being explored for December.

The Tuesday updates came after Fury first took to social media Monday afternoon to playfully complain and insult that Chisora was refusing to sign a contract to fight him.  Not unexpectedly, Chisora had fired back earlier Tuesday with his own social media video saying that Fury need the permission of “mommy and daddy” or his, co-promoters Frank Warren of Queensberry Promotions and Bob Arum of Top Rank Boxing, to get the contract offer to Chisora.

Now, as Fury said in his videos, he believes that everything is in place to send a contract to Chisora and make his third title defense a reality.

That could come, as soon as, later this week.

Juan Francisco Estrada Wants Chocolatito Trilogy Instead Of Franco?
Bob Arum On Fury-Chisora Happening Next- “Of Course Not!”
Advertisement
To Top