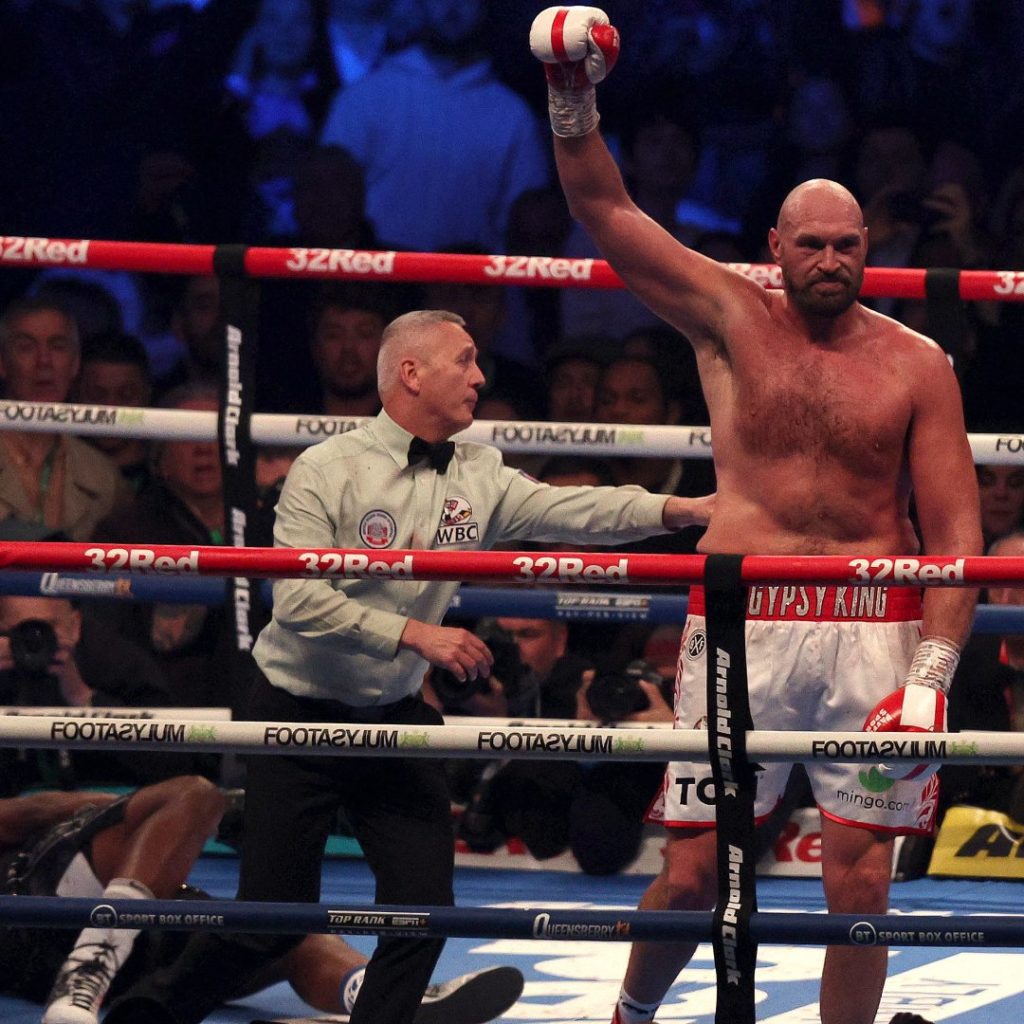 In a spectacular return to the U.K. to defend his WBC heavyweight title Tyson Fury needed only one solid uppercut to dispatch challenger Dillian Whyte and end their title fight in the sixth round Saturday night.

Fighting in front of record of some 94,000 fans at Wembley Stadium in London, Fury dominated the action before landing the devastating punch that ended it.

Fury, now 32-0-1, 23 KOS, used his massive size and reach to keep Whyte at distance and the challenger could do very little offensively except an occasional landed punch through the first five rounds.

Fury, who won the WBC belt with a seventh-round TKO over Deontay Wilder in February of 2020 and then, defended it against Wilder with a TKO last October, looked his usual fresh and fit self in this one. He consistently scored with a left jab throughout the bout and frustrated Whyte with punches behind it.

There was frequent wrestling and grappling and eventually, a clash of heads in the fourth round opened a small cut outside the right eye of the challenger. Referee Mark Lyson, who was working his first-ever world heavyweight title fight, had his hands full. And, he kept repeatedly calling time to warn both fighters to stop roughhousing, holding and throwing elbows or shoulders.

In the end the “Gypsy King’s” superior skill and punching power won out with one thunderous blow that came in the final 20 seconds of the sixth. This as, Fury deftly used a couple of pawing jabs to keep Whyte at distance and distract him.  Then, as Whyte took a half-step in, Fury crushed him on the left side of his chin and jaw with the uppercut.

Fury actually followed through with a slight shove, as Whyte toppled onto his back almost in an exact replay of the Povetkin knockout loss in August 2020.. Whyte, now 28-3 with three KO losses, staggered to his feet at the count of eight but was unable to continue with his back turned to Fury and Lyson waved it off at the 2:59 mark.

“I’m overwhelmed with the support. I cannot believe that 94,000 of my country men and women have come here tonight,” Fury told BT Sport in the ring post-fight.

“I just want to say thank you so much to every single person that bought a ticket here tonight. Dillian Whyte is a warrior…unfortunately for Dillian Whyte he had to face me tonight. There’s no disgrace. He’s a tough, game man. He’s as strong as a bull….but you’re not messing with a mediocre heavyweight. You’re messing with the best man on the planet.”

Indeed, that’s tough to argue after Fury’s win earlier in his career over undisputed champ Wladimir Kltischko in 2015 and the two defeats of Wilder, who had held the WBC belt for five years before Fury beat him the first time. All of this while Fury remains unbeaten.

Now, the debate will intensify as to whether Fury, who made over $30 million in another lucrative purse Saturday night, will walk away from the sport?

However, it will be tempting for him to stick around and fight the winner of the Oleksandr Usyk-Anthony Joshua unified heavyweight title bout coming later this Summer.