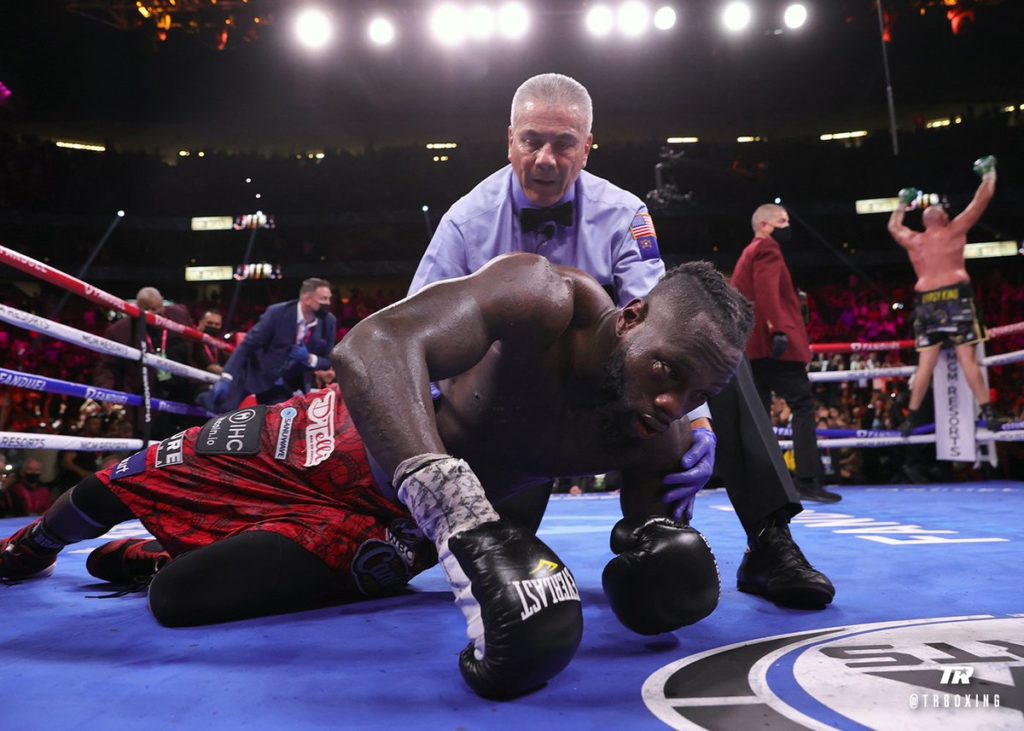 It was long awaited, but boy did Saturday night in Las Vegas WBC Heavyweight Champ Tyson Fury and former champ, Deontay Wilder, deliver on their third fight. And, when “the Gypsy King” finally had retained his title in a wild fight that saw both men down multiple times, plus staggered on other occasions, we were left to contemplate arguably the most thrilling Heavyweight title bout since Muhammad Ali and Joe Frazier fought the “Thrilla in Manilla” 46 years ago.

Yes, this was that good in front of a roaring crowd at the T-Mobile Arena just off the Vegas Strip and with millions more watching worldwide via PPV and the internet.

PHOTO OF THE YEAR 👑🤝 KO OF THE YEAR. @Tyson_Fury | #FuryWilder3 pic.twitter.com/roOmbNFtuB

First, let’s start with the end,

Fury validated his previous TKO stoppage of Wilder 20 months ago that originally took the WBC crown by landing one final thunderous right. That splattered the Alabama native, once and for all.. And, it definitely cements the British former Undisputed Champ, as the man to beat in the biggest and baddest of all boxing divisions.

It was a fight that will certainly win “Fight of the Year” for 2021 and will be remembered well beyond.

But, as impressive as Fury’s KO was, it might have been equally as telling Saturday night that he had to survive the fourth-round.

That’s where it looked like Wilder was going to spectacularly get his long awaited revenge on Fury. This, as “the Bronze Bomber” dropped the Brit after a hard right to the side of the head, and just moments after, had him on the ground, again after a right and a left. However, Fury would survive, albeit barely, by the oldest of boxing adages, “saved by the bell” to end the 4th frame.

Amazingly, from that point on Fury regained control and began to dominate Wilder with faster, harder punches and reduced Wilder to being simply a wounded, tiring former champ. But, still, a former champ looking to land his nuclear right hand just once more and maybe end things?

In the end, while Wilder was long on guts and the ability to take a punch, he simply had no answers for Fury’s aggressiveness and volume of shots. Wilder slowed and his punches lacked the same zip. Meanwhile, with all the questions swirling about how hard he had trained or not?  A 277 lb. Fury was the more fresh fighter in the championship rounds and continued to pound away at Wilder.

That’s where the comparisons will come between what Ali and Frazier did in their Trilogy fight 46 years ago.

Now, while those two legendary Hall of Famers didn’t knock each other down a total of 5 times, their action was as continuously violent and brutal 14 rounds in the Philippines heat. Thus, making the “Thrilla in Manila” the standard of all-time heavyweight slugfests. Ali eventually retained his title when his nemesis Frazier could not answer the bell for the final frame.

And, much the same way late Saturday night in the Vegas desert Wilder had nothing left with the “Gypsy King” pounding on him in a corner and eventually, dropping him with one more massive right to the side of the head. Referee Russell Mora had wisely seen enough and immediately, waved the fight off giving Fury every bit of satisfaction and recognition that he will deserve in the weeks and months to come.

Ironically, Wilder may have gained more respect and credibility by his efforts and incredible chin in this loss than all of his previous wins against mostly questionable competition, combined.

And, on Saturday night Heavyweight Championship Boxing at its finest was on full display with a roaring full capacity arena in a fight that will be talked about for many months to come.

And, Fury soaking in the accolades that great champions who come out of wild, dangerous fights victorious deserve.