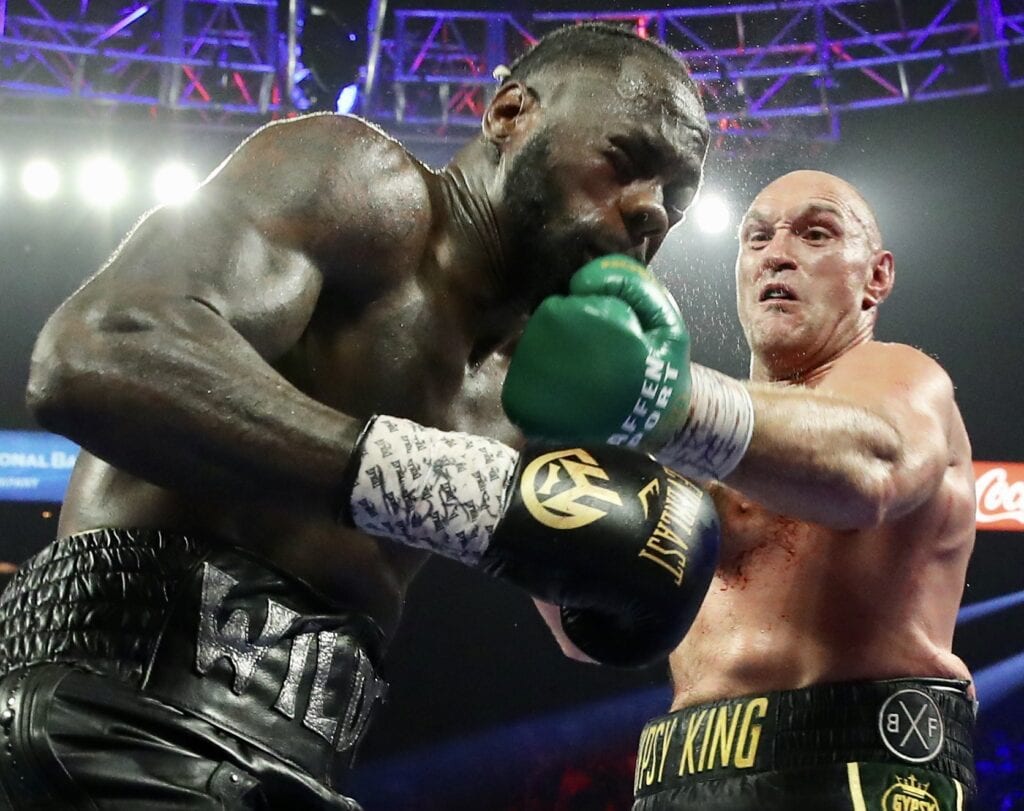 (Our colleague in the U.K. David Payne, is back with his thoughts in advance of Saturday night’s Fury-Wilder III in an item originally appearing on his site: boxingwriter.co.uk)

Trilogies, in an era when the first fight is all too often hard to make, are a rare spectacle. Particularly among heavyweights. The third of the series is typically only required to settle the argument as to who is the better fighter following shared outcomes in the opening bouts. Ali v Frazier, Bowe v Holyfield the most famous examples in the modern age, if the 1970s and 1990s still count as the modern age. Both pairings were notable for the equality of the protagonists and for the career best performances drawn from all four.

As the days and hours tick down to the third fight between Fury and Wilder, there should be, given this scarcity, the iconic nature of those illustrious predecessors and the tumultuous events of the first two encounters, more enthusiasm for the fixture than there is. Remarkably, considering the dramatics of those two fights, the mandate behind their third meeting is not driven by the appetite of fans or the quest for resolution as to who is the superior fighter, it is compelled only by contractual obligation and the stubbornness of Deontay Wilder.

Fury v Wilder III, until last week merely an irritating obstacle to greater prizes, is now upon us. As boxing’s various troubadours, fixers and mystics descend on Las Vegas, the memory of Joshua’s dethronement as fresh in their minds as the jet lag and neon lights will permit, the fight in prospect has become entirely more intriguing.

Only a tightly sewn contract affords Wilder this chance; legal arbitration supporting the American’s claim to a third fight despite the emphatic nature of his defeat in the second. In that 2020 encounter, following the 2018 disputed draw, Tyson Fury dispensed with his usual cautious, back foot style and deployed his advantages of weight, reach, height and technical acumen with greater aggression than anybody anticipated. Wilder, had neither the mass, precision or ring smarts to evade his attacks nor permit himself space to launch his own offence. It was a tactical and physical mismatch, one that exposed Wilder’s limitations and left the Alabaman puncher bereft of confidence, most of his senses and with his stock as an elite heavyweight in tatters.

The excuses and acrimony that followed did little to suggest Wilder would ever digest the loss nor be able to reconstruct both his shattered ego and flawed technique. Out went trusted coach Mark Breland for having the temerity to fulfil his function and save Wilder from unnecessary punishment and perhaps everlasting damage. All defeated fighters look to rationalise a defeat to preserve their own invincibility, a prerequisite for life as a prize fighter, but Wilder’s array of excuses were especially flimsy.

In the build up to this fight, elongated by a summer postponement, which itself created doubt that the fight would ever happen, video clips and soundbites released from Wilder’s camp have largely failed to convince observers that his preparation has addressed the gaping holes in his defence and the wilderness that is his offence. It is borderline delusion to believe he can suddenly learn conventional footwork and add craft to his explosive punching. This isn’t “Rocky 3,” fighters are not reconstituted in one training camp, even the four month variety of the 21st century.

Wilder will prove to be all that he has ever been, a chaotic collection of swings that occasionally disguise themselves as precision marksmanship. The best three opponents he has faced, Fury twice and Luis Ortiz, out boxed the former WBC belt holder to different degrees for every round they shared.

That Wilder won one and was but a second from winning two, is a measure of his devastating power but also confirms his limitations. Only that power preserves interest in the third fight. As Wilder maintained prior the rematch in 2020, he only needs to be perfect for 1 second and he wins the fight. Or framed differently, Fury only needs to make one mistake and he could find himself staring back up at the ring lights.

Hard to contemplate Fury repeating his Lazarus act of 2018 if he was put into that dark hell again on Saturday night, though he is presumably a fitter, stronger man than he was in the first of the trilogy.

As with all things revisited, there is scope for Fury to overlook the details, to prepare less rigourously and to assume the fight is a formality such was his dominance last year. The loss of Anthony Joshua from his immediate dance card may also remove some of Fury’s motivation or may remind him that defeat is always a possibility.

There has been cynicism and suspicion about the depth of his preparation but a repeat, in much quicker style, of his rematch victory appears the most likely outcome, as rematches tend to do, but ignoring the potential for Wilder to land one fight altering shot would be foolhardy too.

A Fury win in 4. And the end of the Fury v Wilder storyline.