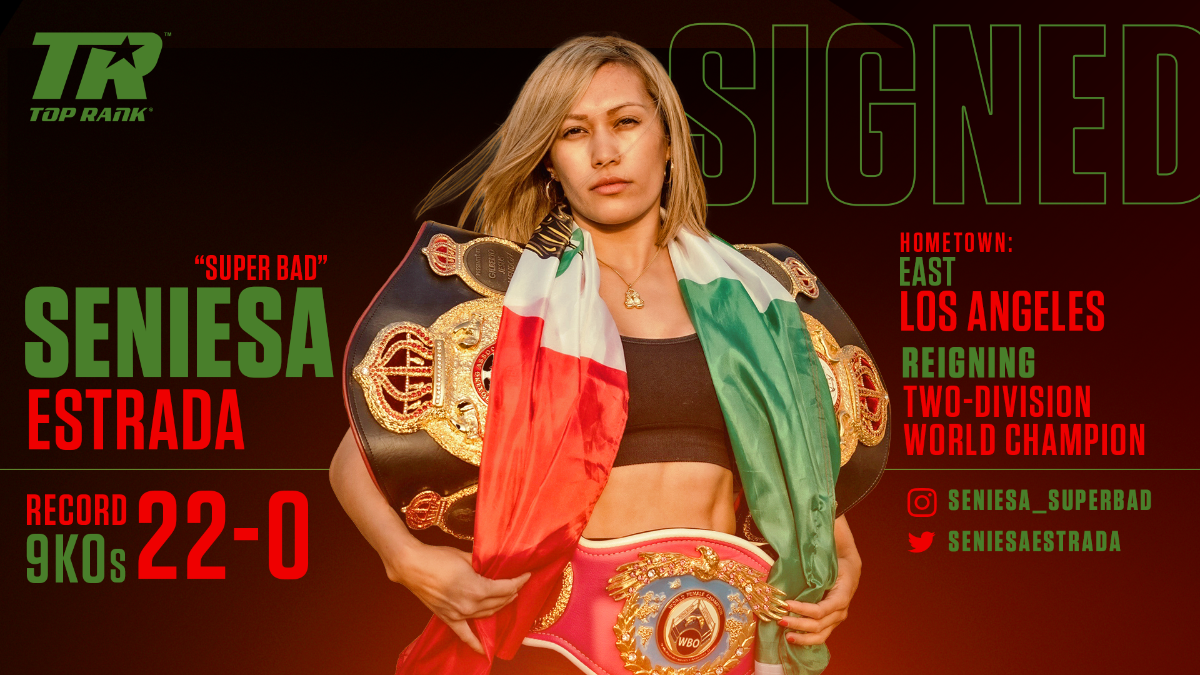 Top Rank Boxing made official Thursday what had been rumored earlier this week, that they’ve made a second significant ladies championship fighter, Seniesa Estrada, part of their promotion.

Top Rank posted the news on social media that the current two division world champ Estrada is set to join them on a multi-fight deal that will be begin with her debut with the promotion later this Fall.

Estrada (22-0, 9 KOs) is the current WBA minimumweight and WBO junior flyweight champion and is the No. 1-ranked female in both divisions by ESPN.com. She will make her highly anticipated Top Rank on ESPN debut later this year.

“Seniesa Estrada is one of the world’s premier fighters and is well on her way to becoming a superstar in the sport,” said Top Rank chairman Bob Arum. “She is an engaging young woman who brings unbridled passion into the ring every time she fights. I am ecstatic that she has joined our tremendous roster of world champions.”

“I am extremely excited to be part of the Top Rank family. I’m eager to get back in the ring and continue where I left off, winning world titles, putting on exciting fights, and unifying in three divisions,” Estrada said. “Thank you, Top Rank, for giving me the opportunity to represent women’s boxing alongside Mikaela Mayer. There is no better timing then now to be with a promotional company like Top Rank and fight on such a great platform to show the world that women’s boxing is here to stay. I’m ready to shine.”

“I am thrilled that Seniesa has signed with Top Rank and will have the opportunity to showcase her talents to the largest possible audience,” said Jerry Casarez, Estrada’s manager. “The best is yet to come!”

Estrada, an 11-year pro, has been at the forefront women’s boxing meteoric rise over the past decade. A former U.S. amateur standout with more than 100 fights in the unpaid ranks, Estrada first walked into a boxing gym at the age of 8. Before the recent women’s boxing renaissance, she earned her stripes sparring boys at Hollenbeck Youth Center in Los Angeles.

Estrada notched a signature victory in November 2019, a dominant technical decision over bitter rival and U.S. Olympic bronze medalist Marlen Esparza. In 2021, Estrada went 3-0 and firmly established herself as a pound-for-pound force. She snatched the WBA minimumweight title from longtime champion Anabel Ortiz in March, dominated Tenkai Tsunami over 10 rounds in July to win the WBO junior flyweight crown, and defended her minimumweight title in December with a fourth-round stoppage over Maria Micheo.”

Estrada joins Mayer as the ladies “faces” of Top Rank. Mayer will battle Alycia Baumgardner, for three of the 130 lb. ladies world title belts coming on September 10th in London. That fight will be the co-feature of the Claressa Shields-Savannah Marshall battle for the women’s undisputed middleweight title main event from Matchroom Boxing.

Mayer made Top Rank history previously, when she became the first female fighter to headline any of the promotion’s main events. That was her 10 round decision July of 2020 over Nigerian Helen Joseph shown on ESPN in the “bubble” that Top Rank created at the MGM Grand Hotel in Las Vegas.