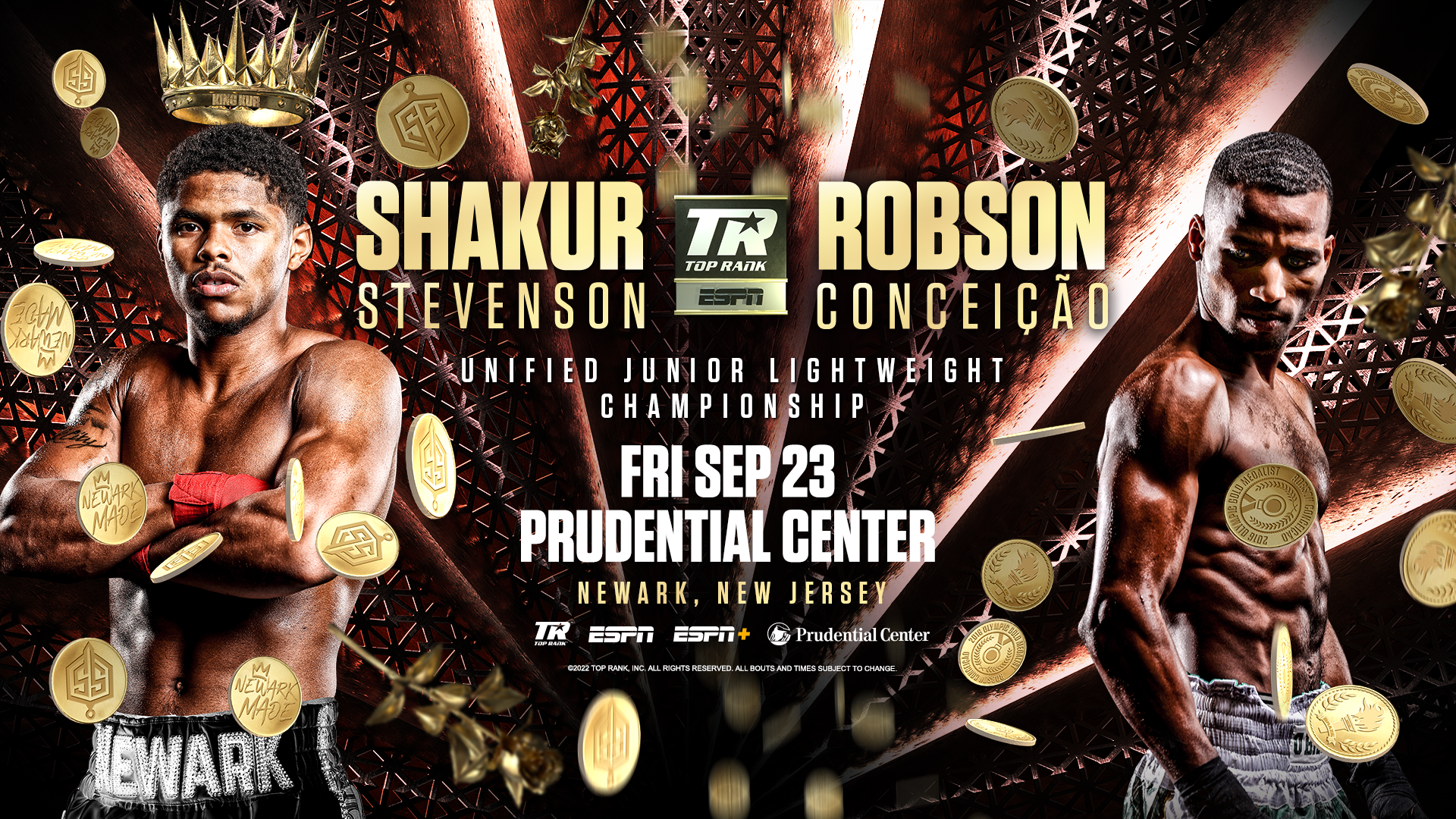 One the top championship fighters in the Top Rank Boxing stable will be back in action in September and ready to headline in his hometown. Shakur Stevenson will defend his unified WBO/WBC jr. featherweight titles against Robson Conceicao of Brazil on ESPN on September 23rd.

Top Rank made the announcement and held a press conference Monday afternoon in Newark, New Jersey, where Stevenson is an unbeaten, boxing icon,

“Stevenson, the WBC, WBO and Ring Magazine champion, puts his hardware on the line against Brazilian standout Robson Conceição on Friday, Sept. 23, at Prudential Center in Newark, N.J. In the eight-round lightweight co-feature, Tokyo 2020 U.S. Olympic silver medalist Keyshawn Davis returns against an opponent to be named.

“The sensational Shakur Stevenson is a once in a generation boxing talent, and he’s back home in Newark as a world champion against a worthy contender in Robson Conceição,” said Top Rank chairman Bob Arum. “I also can’t wait to see young talents like Keyshawn Davis and Bruce Carrington perform on such a significant card.”

Stevenson (18-0, 9 KOs) returns to Prudential Center following a career-best performance in April over Oscar Valdez. He unified two junior lightweight titles in a near-shutout over 12 rounds and vaulted up the pound-for-pound rankings. Stevenson, a former featherweight world champion, won the WBO junior lightweight strap last October with a knockout over long-reigning champion Jamel Herring. In 18 professional fights since capturing a silver medal at the 2016 Rio Olympics, Stevenson has lost a small handful of rounds, establishing himself as the sport’s premier defensive practitioner. The southpaw stylist comes back to Brick City intent on maintaining his dominance.

Stevenson said, “I’m coming home to Newark and I’m back as a unified champion. I’ve always proudly represented Newark, and I’m ready to perform in front of my hometown fans at Prudential Center on September 23. Robson Conceição gave Oscar Valdez a tough fight. A lot of people felt like he won, but we’ll see how good he really is when he fights me.”

Conceição (17-1, 8 KOs) made history as Brazil’s first Olympic boxing gold medalist, turning pro under the Top Rank banner less than three months after the 2016 Rio Games. He entered the Valdez last fight last September with a 16-0 record, but the oddsmakers gave him little shot at dethroning the champion. Twelve rounds later, he lost a close points verdict but ultimately proved himself as a worthy title contender. Less than five months after the Valdez fight, he traveled to Tulsa, Oklahoma, and upset the previously undefeated Xavier Martinez over 10 rounds. Conceição, who fought the likes of Valdez, Vasiliy Lomachenko, Joe Cordina and Josh Taylor as an amateur, now gets the chance to battle another decorated amateur turned professional world champion.

Conceição said, “Shakur Stevenson is an excellent athlete and has my respect for everything he has accomplished. Our paths are crossing, and there will only be one champion. I guarantee the best performance of my life. It will be the fight of the year and a great show for the audience and my Brazilian fans, the ones that never give up!”

Davis (5-0, 4 KOs), from Norfolk, Virginia, shined in the Stevenson-Valdez co-feature, knocking out Esteban Sanchez in six rounds. The 23-year-old nicknamed “The Businessman,” is a rising star who has yet to lose a round in the paid ranks. The one-time amateur superstar was one of the fistic stars of Tokyo 2020. Davis ran roughshod through the lightweight bracket until the championship bout, where he lost a competitive decision to Cuban prodigy Andy Cruz.”

The undercard, streaming live and exclusively on ESPN+, is highlighted by the fifth professional outing of featherweight Bruce Carrington, who hails from Brownsville, Brooklyn. Carrington (4-0, 3 KOs) will fight Chilean veteran Jose Argel (8-4, 2 KOs) in a six-rounder. Carrington has won three straight by knockout since turning pro with a decision victory last October on the Tyson Fury-Deontay Wilder III undercard.