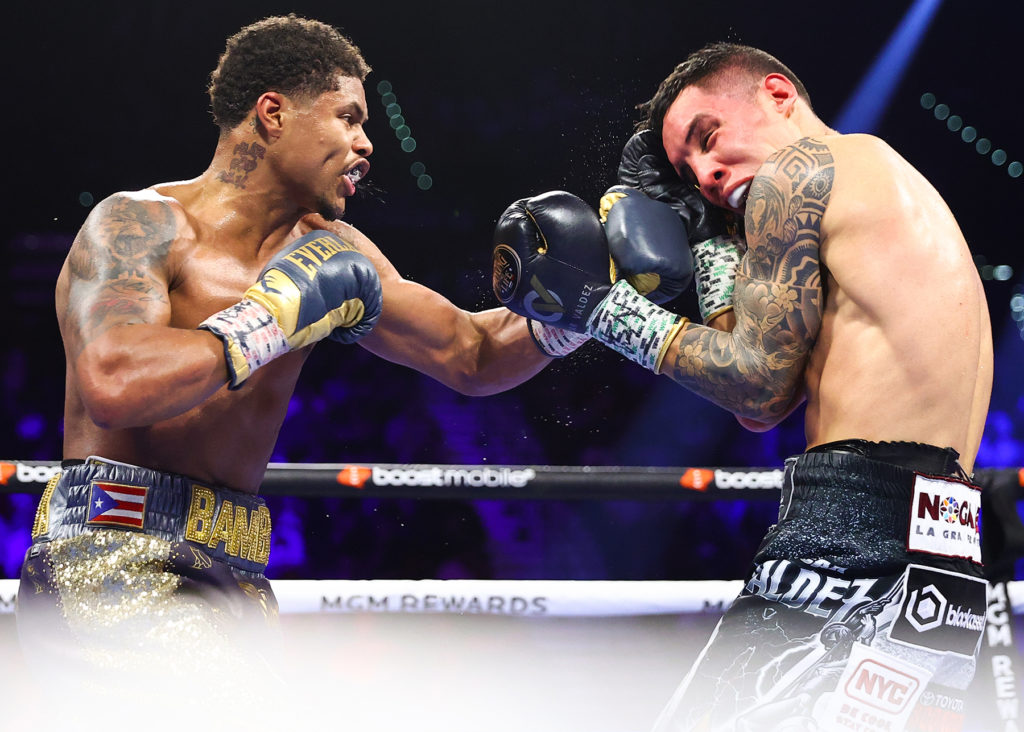 LAS VEGAS – As the final seconds of the fight wound down Shakur Stevenson smiled widely and began to dance around the ring. He knew what the 10,102 inside the MGM Grand Garden Arena also knew – that he had soundly outpointed Oscar Valdez in an entertaining summit meeting between the two best in the world at 130 pounds to unify the WBO and WBC junior lightweight titles, along with winning the vacant Ring magazine title.

Judges Dave Moretti and David Sutherland both had him winning 118-109 and Tim Cheatham scored it 117-110. Big Fight Weekend also scored the fight 117-110 for Stevenson, who dropped to one knee, opened a ring box and proposed to his girlfriend and the mother his infant daughter moments after he was declared the winner.
He was 2-0 on the night.

“This victory means everything,” Stevenson said. “I told ya’ll what I was going to do. I said I’m gonna beat Valdez, (training partner) Canelo (Alvarez) and (their trainer) Eddy Reynoso, so that was my game plan, beat the whole team and I feel good about it. Much respect to them, but that was my game plan.”

As for the fight, some five years in the making, since Stevenson turned pro on the undercard of a Valdez featherweight title defense in 2017, it was a tight, competitive fight through the first five rounds. But in the sixth round, Stevenson, like Valdez also a former featherweight titleholder, scored a knockdown and from there continued to build his lead.

It began slowly but with Stevenson establishing his jab and keeping Valdez away throughout most of the first round. Valdez tried to pressure Stevenson in the second round but could not do much of anything against Stevenson’s movement and jab. Valdez finally seemed to find a rhythm in the third round and landed several straight right hands to force Stevenson back

The fight fell into something of a pattern with Valdez having success when he could force Stevenson back and Stevenson was the boss when he kept he fight in the middle of the ring and used his hand speed and movement.
In the sixth round, Stevenson nailed Valdez with a pair or right hooks, the first of which sent him stumbling into the ropes and the second sending him to the mat for a knockdown. Valdez did not appear very hurt but his face was beginning show the wear of a tough fight.

Valdez (30-1, 23 KOs ), 31, a 2008 and 2012 Mexican Olympian, who was making his second title defense, had a good bounce-back round in the seventh as he forced Stevenson to the ropes with a right hand and also attacked his body when he was on the ropes, but it was short-lived.

Stevenson (18-0, 9 KOs), 24, a southpaw from Newark, New Jersey, 2016 U.S. Olympic silver medalist, who was making his first title defense, was in total control by the ninth round. He fired jabs and sweeping left hands that caught Valdez, who tried to push forward but could not land much. It was more of the same in the 10th round. In the 11th round, referee Kenny Bayless issued Stevenson a warning for head butting.

Valdez continued to press forward in the 12th round but there seemed to be little urgency while Stevenson caught him with a few good shots along the ropes and then wrestled with him on the inside before dancing around the ring to kill the final seconds.

“What a masterful performance from Shakur Stevenson against a great champion like Oscar Valdez,” Top Rank chairman Bob Arum said. “He is one of the very special talents in the sport.”
Valdez was humble in defeat.

According to CompuBox statistics, Stevenson landed 189 of 580 punches (33 percent) and Valdez landed 110 of 508 (22 percent). The 110 landed punches on Stevenson were the most by an opponent, but that is a hollow stat for Valdez.

“I want to collect all the belts at 130 and become undisputed,” Stevenson said. “I deserve to be a superstar, so that’s what I gotta do.”

Keyshawn Davis Impressive On Valdez-Stevenson Undercard
Katie Taylor-Amanda Serrano Thrilling Bout Stirred MSG Memories
Advertisement
To Top
We use cookies to ensure that we give you the best experience on our website. If you continue to use this site we will assume that you are happy with it.OkNoPrivacy policy