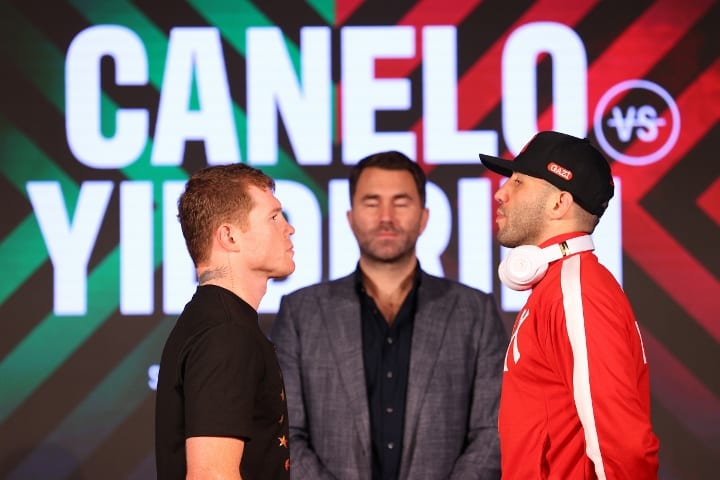 Canelo Alvarez is back in the ring along with quite a few others this weekend, and that is what I wanted to layout in the version of the three things I’m looking forward to in boxing next weekend.

Check out our latest edition of the Big Fight Weekend podcast as we have on the program former undisputed champion Winky Wright and go over the latest news and upcoming matchups as well below.

Before I shakedown what I’m looking for this week, let me recap last week’s.

Miguel Berchelt-Oscar Valdez is going to be explosive. This was a no-brainer going in that would, but it was also an upset capped off with the leading Knockout of the Year candidate as Valdez stopped Berchelt to crown a new WBC Champion Jr. Lightweight.

An explosive left hand at the bell in Round 10 closes a masterful performance, and he is now a 2-time world champion! ???#BercheltValdez | #AndTheNew | ESPN pic.twitter.com/HFw8eT7Mqm

Otto Wallin and Dominic Breazeale in a classic heavyweight crossroads fight. Well, not really, as Otto Wallin was able to do more and got past a very slow-looking Breazeale for the unanimous decision victory.

What version of Adrien Broner will we get back in the ring? The same one we saw lose to Manny Pacquiao in 2019 was in action and gotten an uneventful and bizarrely wide unanimous decision victory against a Jovanie Santiago. Broner honestly made more noise after the fight speaking with Brian Custer than in the ring, so to truthfully answer this, we got the same ol’ Broner.

Here is what I’m looking forward to this weekend.

Canelo Alvarez is back in action this weekend, and what better time for him to take on the revered Avni Yildirim. Okay, maybe not revered but formidable, maybe? Scrappy? The Mr. Robot embraced Yildirim as a stay-busy opponent for Canelo, which will help fulfill the WBC mandatory for him.  Yildirim isn’t expected to win but will hopefully give a few rounds until Canelo wants to go home Saturday night from Hard Rock Stadium in Miami.

Joseph Parker and Junior Fa in front of a packed New Zealand.

The heavyweight landscape will sort itself out on the WBO side of the picture as Joesph Parker and Junior Fa will finally get at it in the ring in a contest that has been brewing, at least since the creation of this website. What is at stake here is interesting as the winner of this match will solidify their spot behind Oleksandr Usyk-Joe Joyce once as many expect Anthony Joshua drops this belt after that Tyson Fury megafight that is still a year later “ironing out minor details.”

The battle of New Zealand!! The big boys face off this Saturday in Auckland! #ParkerFa live on @daznboxing ?? pic.twitter.com/332erLEHmk

The return of “The Dog” Anthony Dirrell

The latest installment of Premier Boxing Champions on Fox will have Anthony Dirrell taking on Kyron Davis. Davis from the great state of Delaware has a future in rapping and is looking for the opportunity to take on the former two-time super middleweight champ in Dirrell. On paper, this fight reads ‘meh’ no joke, but Dirrell on the latest media call has swayed me over.

“Collect the check and go back to rapping. Maybe you can walk out with me one day,” Dirrell said to Davis on the media call Thursday, and that legit has had me repeatedly laughing as I write this. That quote may make my favorite line of smack talk for the year if I’m honest.

“They say he do yoga, so Imma stretch him out,”  Dirrell said on the result against Davis Saturday night. Let’s see if he deliver against Davis, trained notably by Stephen “Breadman” Edwards.

"The most difficult moment in my life is when I had cancer. Now, I cherish life and live every day in the moment." ?

Go TOE 2 TOE with @Anthonydirrell as he reflects on his boxing journey including his battle with cancer #DirrellDavis pic.twitter.com/ByaoHgGKH9