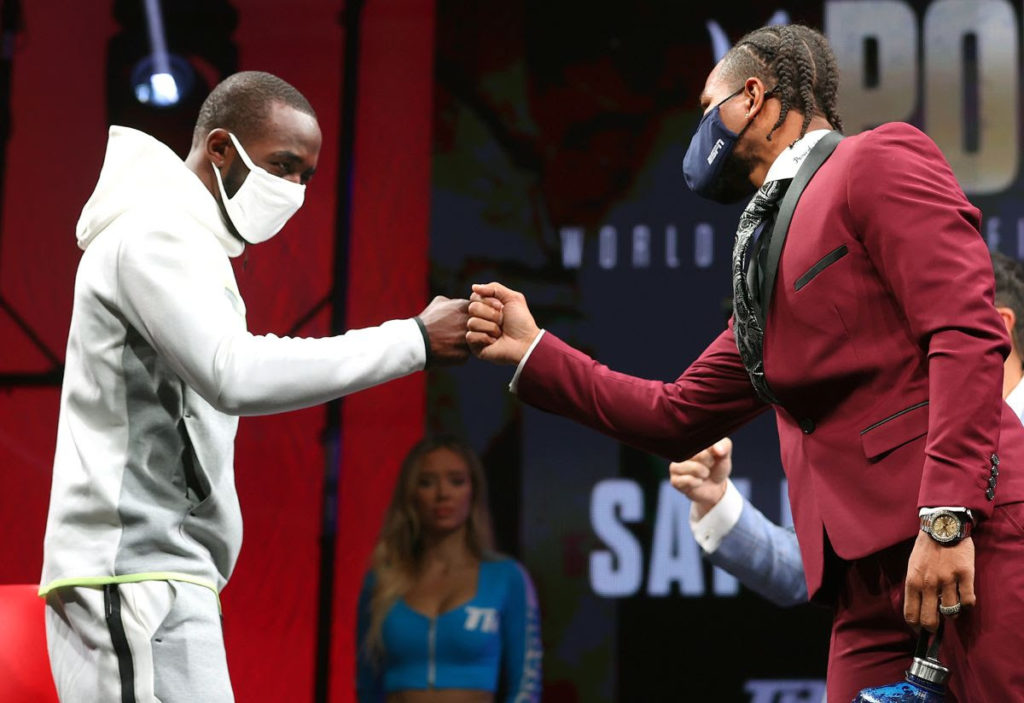 Upcoming in the United States,  Terence Crawford and Shawn Porter clash in Las Vegas to close out boxing’s big fight weekend. With that in mind, here are the three boxing things I’m looking for this weekend, but here is a quick recap of what I was looking at from last week.

Can Kyrone Davis Upset The Boxing Look-Ahead Mirror? Man, what a fake news headline. The long answer is no, as Davis was stopped in seven rounds and also because the look-ahead mirror didn’t expect Canelo Alvarez in his next fight to challenge at a modified cruiserweight limit in 2022.

Terri Harper vs. Alycia Baumgardner. I wrote last week that Baumgardner was a live underdog, and after four rounds and the best referee stoppage I’ve seen in recent memory, you were at the pay window as she is the new champion at super-featherweight. We’ll see if they run this back in 2022, but Harper was coming off a year layoff and had no answer for the power Baumgardner hit her with. Rematch or not, we’ll get a unification against Mikela Mayer sooner than later in 2022.

Can Gabe Rosado upset Jamie Munguia? Rosado may have won at best two rounds realistically against Munguia in the most entertaining one-way traffic in a while. HE was game, but Munguia showed last Saturday at the Honda Center why he’s one to keep an eye on at middleweight.

Check out the latest “Big Fight Weekend” podcast where we preview the huge welterweight title fight between Terence Crawford and Shawn Porter with this week’s guest TC Martin of “The TC Martin Show.”

Here are the three things I’m looking for this weekend in the world of boxing:

Don’t let the fist bump fool you between two well-established friends. Many questions will be answered when these two face off for the WBO welterweight title Saturday night in Las Vegas. Crawford has a test in Porter, which will be his toughest test at 147 pounds and his biggest name in the division. Porter comes in with a chance to chance to pull off not only an upset but also become a three-time world champion in the process.

“I respect everything that Shawn does. Shawn is athletic, he can box, he can bang, he can move around in the ring, he can cut corners and take angles,” Crawford said at the final presser this week. “I’m not going to sit here and say that I don’t respect anything that he does. I’m just going to say that I do a lot of things better than Shawn. I’m going to show him come Saturday.

“I don’t think there’s too much that I can say to Bud that’s going to change the way he thinks about himself and the outcome of this fight<” Porter noted. “He can’t look at me and say, ‘I’m going to beat your ass’ and I’m going to believe that, and he knows that, and he won’t dare to do it. I could say the same thing he said, and I believe it.

It will be a great matchup that we’ll be watching live on ESPN pay-per-view Saturday night.

Will Demetrius Andrade show us something different against Quigley? 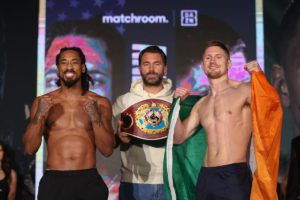 While I think I know the answer to that question, the talk and scuttlebutt from “Boo-Boo” was he’s been training to be more destructive heading into his latest middleweight defense in Manchester, New Hampshire.

“I’ve been training to be destructive,” said Andrade this week. “Someone is going to stop this fight. Put your house on it.

“I look to give everybody a beating in a sense, to outclass them. Going in and knocking people out is cool, but I also like to get rounds in and show my skill level. We just saw Canelo and Caleb Plant, it took him 11 rounds to end the fight but I’m not Caleb Plant. There’s a whole lot more in me than what Caleb showed. That’s the type of fight that I would like to get in and do though, to show my skills, my heart, my conditioning, what I am made out of.

Andrade gets to join the countless others left behind off the Canelo bus. It is worth noting that his title reign since beating Walter Kautondokwa for the vacant strap can be only explained as lackluster. While I don’t think this defense in front of the biggest crowd in New Hampshire boxing history won’t silence any critics, he’ll see if it’s another day at the boxing office for Andrade or not Friday night on DAZN. 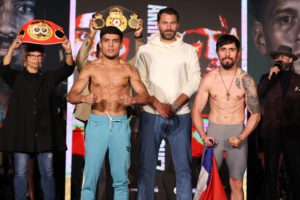 If the main event of Andrade-Quigley has you running for the hills, the undercard should be entertaining at least.

Unified champion Murodjon Akhmadaliev is a problem at Super Bantamweight. It is in action against late replacement Jose Velasquez as original opponent Ronny Rios has to pull out due to COVID. Either way, Akhmadaliev looks to continue his stellar pro career and move to 10-0 and should be interesting against a game Velasquez who may be more come forward than Rios would.  This fight spotlights an undercard that will feature titles in all of them.