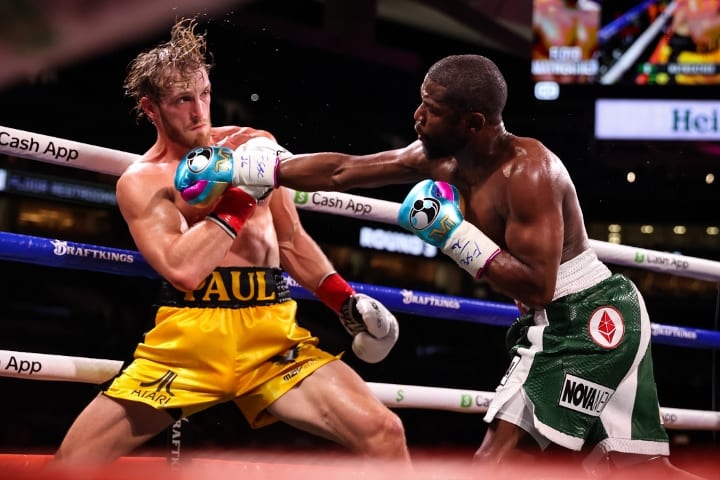 The Mayweather-Paul Overreaction Is Hysterical

I’m so glad that this exhibition was between Floyd Mayweather and Logan Paul for one reason only.

We get to move on from the insane overreactions coming from everyone over what was clearly meant to be nothing more than a spectacle or, as Mayweather said before the bell rang Sunday night, “legalized bank robbery.”

Can we start with anybody giving a breakdown of this fight? Don’t be that person. At what part of the broadcast in that fight did you all realize that the main event would be for kicks and giggles? The correct answer is when before the main event took place and Migos began rapping blow by blow man Mauro Ranallo referred to it as the “meme event.”

I mean, remember that championship title fight called by Desus & Mero? Thankfully, this was an exhibition, or the sanctioning bodies would’ve been tripping over themselves to get involved in this.

At that point, I began to feel sorry for anyone who had money or a short-term investment on the exhibition, and as I mentioned in the latest Big Fight Weekend Podcast, the phone number is 1-800-ADMIT-IT. So go ahead and stop reading here and give those digits a tryout. Just say you wagered on they’ll know what to do from there.

There are actually people in this press room discussing a Mayweather-Paul rematch, as if once wasn't more than enough.

The only issue I had with the card is that Showtime was on top of all night as many folks had technical issues watching the pay-per-view (If you felt ripped off and are requesting a refund, ahead and check that story out). To the others, Mauro shouted out all of those who were watching it by alternative and/or illegal streams as the meme event got underway.

Mayweather didn’t get the knockout as many hoped that some “the real boxer needs to knockout the Youtube fighters” quest. It would’ve been fun to see a knockout in a perfect world, but you can say that about every bout, unsanctioned or not. Once Paul was gassed and forced to clinch, Mayweather couldn’t do much for the simple fact he was the bigger man by about at least 40 pounds. Mayweather stated as much after the fight.

I mean, the goal of this was to bring new eyes to the sport, and this did. Shockingly to those new to the sweet science may have been bored at the action between the two over eight rounds. The knock-on Mayweather fights in my life have always been that his defensive style tends not to be great to those not into that. This was business as usual for Floyd in the ring, and if you missed the event, Showtime will replay it, but you didn’t miss much except Desus & Mero are really funny.