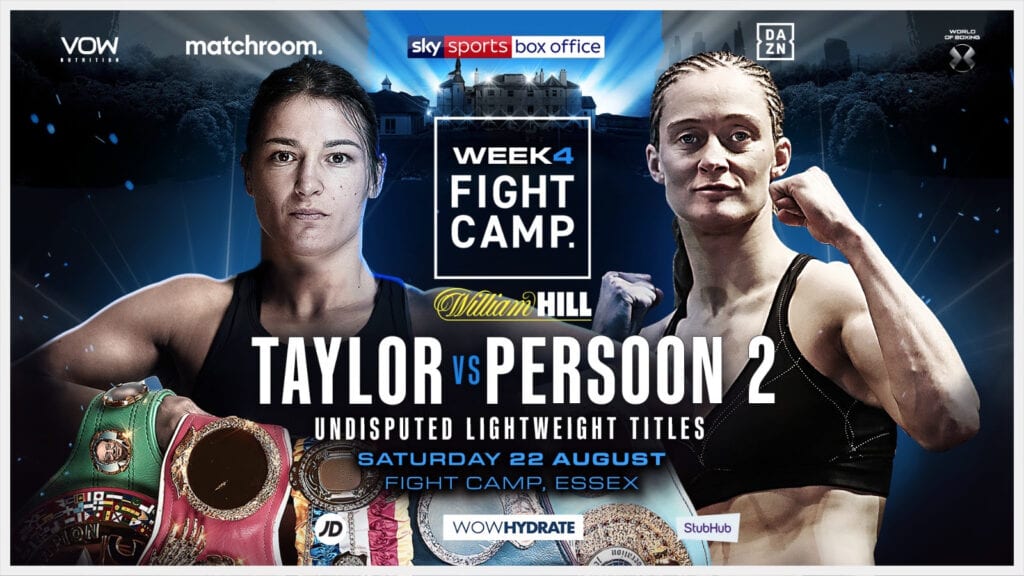 Taylor-Persoon 2 made official for ‘Fight Camp’

Taylor (15-0, 6 KOs) completed her fairy-tale journey from Olympic Gold to Undisputed Lightweight World Champion with a thrilling but controversial points win over Belgium’s Persoon on a historical night at the world-famous Madison Square Garden on the Joshua vs. Ruiz bill last year.

After a bloody and brutal battle that captivated the New York crowd, the Irish star added Persoon’s WBC belt to her IBF, WBO and WBA Titles to hold all four at 135 lbs. and cement her place as the number one Lightweight on the planet.

The 34-year-old went on to create more history at Manchester Arena in November when she dethroned WBO Super-Lightweight World Champion Christina Linardatou to become a two-weight World ruler – becoming only the third Irish boxer to win World Titles in two weight classes.

Persoon (44-2, 18 KOs) held the WBC strap for five years, making nine successful defenses in that reign, before losing it to Taylor in a Fight of the Year contender. Despite losing on two of the judges’ scorecards, Persoon was convinced she’d won after ten rounds of relentless action and has been lobbying for a rematch ever since.

“With Amanda Serrano not taking the fight I wanted the biggest fight possible in August and I think a second Persoon fight is one that everyone wants to see,” said Taylor. “I’ve been looking forward to a rematch ever since the first fight and I’m delighted it’s been made. It was definitely very close first time around, but I felt I deserved the win and I intend to leave no doubts in the rematch.”

Persoon said: “I am ready to get the victory following the injustice last June in New York, not by words but in the ring – I am ready!”

“Wow! What a fight – what a night! To be honest I can’t quite believe this fight has been made, I can’t give enough credit to Katie and Delfine for agreeing to do it again,” said Eddie Hearn. “Since their epic Fight of the Year contender at MSG last year, everyone has wanted to see this once again and now we have it. I’m very proud to stage this fight especially at such a critical time for our sport – along with Whyte vs. Povetkin August 22 will be one not to forget.”

Adam Smith, Sky Sports Head of Boxing Development, said: “We’re absolutely delighted to confirm Katie Taylor’s eagerly awaited rematch against Delfine Persoon, with all the World Lightweight Titles on the line. Katie has called for a second fight ever since that thrilling first encounter when she received the verdict, much to the dismay of Persoon.

“They go again on the Whyte-Povetkin bill, which just got even bigger, and Katie will be determined to end any dispute with a resounding win. I’ve been speaking to Katie over the last few days and she’s more fired up than ever to show once again why she is a pound-for-pound star of the sport.

“Of course, we’ve also got Whyte’s high stakes showdown against Povetkin, with Dillian risking his WBC Mandatory Title shot. It’s repeat or revenge for Taylor and then Heavyweight fireworks in a fitting finale to Matchroom’s Fight Camp!”

Takam outboxes Forrest in a dull one
Mitchell Stapleton ready to explode
Advertisement
To Top
We use cookies to ensure that we give you the best experience on our website. If you continue to use this site we will assume that you are happy with it.Ok