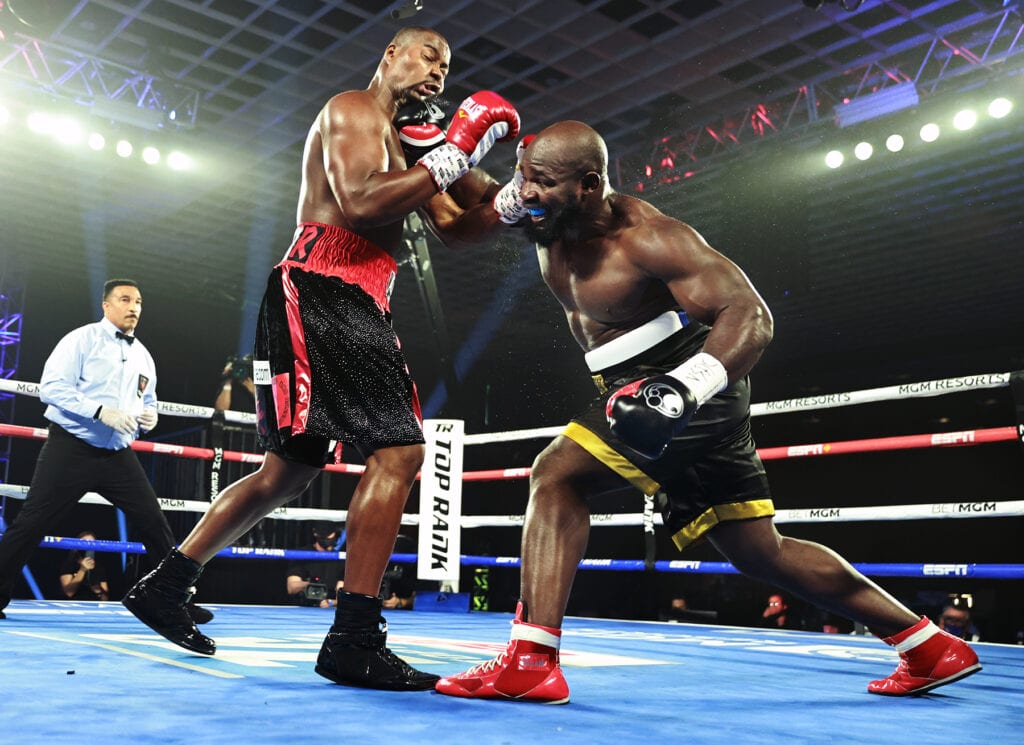 Takam outboxes Forrest in a dull one

Heavyweights collided inside “The Bubble” on Thursday night as the main event pitted Carlos Takam (39-5-1, 28 KOs), and Jerry Forrest (26-4,20 KOs)closed out the Top Rank Boxing broadcast that aired on ESPN.

Early on in the contest saw that the veteran Takam, who took this fight on short notice after Jarrell Miller got popped for a positive PED test, in control of the battle. Takam landed not only more punches in the first three rounds, but was also consistently hitting Forrest with straight right hands. The real action from the first four rounds of this fight was when both men were throwing on the inside. That action drifted as time went on.

Otherwise, Takam was able his use his movement to outbox Forrest.

It is worth noting 2 hours before this first bell rang, Forrest was seen on the ESPN broadcast plowing thru a roast beef wrap which led to questioning by the broadcast.

There was a clash of heads early on in the fight, which caused a cut above the right eye of Takam. That eye at some points of this fight was getting more action than what took place in the ring.

Forrest, throughout the broadcast by analyst Tim Bradley was called “lazy” and didn’t bring much to the fight.

Takam’s trainer really yelled “You know where that roast beef sandwich is!” 😂#TakamForrest heading down the home stretch, LIVE NOW on ESPN. pic.twitter.com/OCzqaubcp8

Forrest, in the later rounds, decided to apply more pressure and target that eye that was effecting Takam. Fatigue also was setting in for both of them, as Takam wasn’t bouncing as much as he was in the earlier rounds. The fatigue was apparent to the point that if either one of the two could land clean punches, that either one of them could go.

That wasn’t the case in this one, as it went to the cards. For Takam, this was his fourth straight win since losing to Dereck Chisora back in 2018, but if you didn’t catch this one, you missed nothing.

Takam-Forrest take center stage tonight
Taylor-Persoon 2 made official for ‘Fight Camp’
Advertisement
To Top
We use cookies to ensure that we give you the best experience on our website. If you continue to use this site we will assume that you are happy with it.Ok