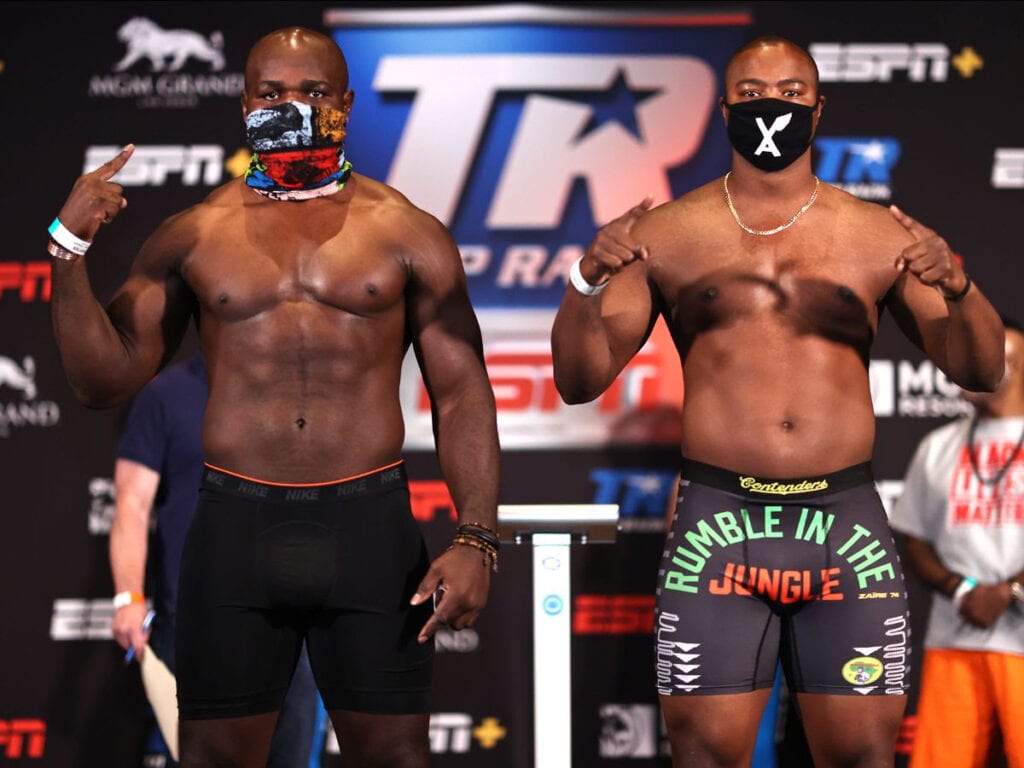 Heavyweights Carlos Takam and Jerry Forrest headline tonight’s main event card for Top Rank from inside “The Bubble” on ESPN, and needless to say, both guys are relishing in the opportunity.

The fight card, which starts at 8 p.m. ET/5 p.m. PT was initially supposed to feature the debut of Jarrell “Big Baby” Miller in a contest against Forrest. After the disgraced Miller was again caught testing positive for PEDs or as ESPN boxing analyst Tim Bradley said during the broadcast of the latest card from Mexico, “on that Juicy Juice”, he was replaced with the 39-year-old Takam.

Takam (26-3, 20 KOs) himself was originally supposed to face fellow heavyweight and another recent Top Rank signee Oscar Rivas, but that was scrapped once, Rivas suffered an injury.

Takam’s promoter,  Joe DeGuardia of Star Boxing, said that for Takam, this would be a test and personally felt Rivas matched up better.

“Jerry Forrest, it’s not an easy fight for Carlos,” DeGuardia said. “The guy has got a difficult style and a much different style than Oscar Rivas. And at this stage of Carlos’ career, I like the Rivas fight much better. But certainly, it’s a great opportunity for Carlos. It’s good for him because it can lead to many other big things. Forrest has a great record, but he hasn’t fought the same type of opposition as Carlos, by any stretch of the imagination.”

Takam took this fight on short notice to take on Forrest, and despite that is the slight favorite to defeat Forrest.

We saw a bunch of love for the underdog Forrest at first, especially at those early prices of 2/1 (+200) or better.

Forrest (26-3, 20 KOs) is coming off a stoppage win last October of fight veteran Martez Williamson. Still, many know Forrest from his contested split decision loss against prospect Jermaine Franklin. A fight which many who saw it on Showtime’s “ShoBox: The Next Generation” last July, thought, including the broadcast team calling it, had for Forrest.

Forrest is looking forward to being in the main event again to show what he can do.

“It worked out,” Forrest said in an interview to Boxingscene. “It really got me noticed to where I got the contract that I got, actually. There were a lot of plusses from the loss. The people know that I won that fight. I feel like nowadays I’m more like a people’s champion. The boxing world is starting to notice me, but I feel like people are gravitating toward me more.”

What more can you ask for than two heavyweights looking to make a name for themselves with all eye on them tonight? This should be surprisingly good tonight to close out the show in Las Vegas.

Marriaga,Verdejo official card details
Takam outboxes Forrest in a dull one
Advertisement
To Top
We use cookies to ensure that we give you the best experience on our website. If you continue to use this site we will assume that you are happy with it.Ok