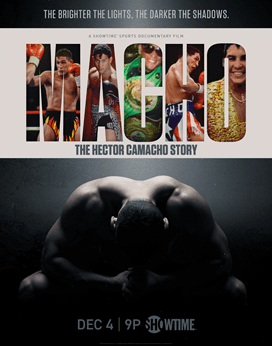 Some interesting and dramatic news outside the ring involving the 2012 unsolved murder of Hall of Famer Hector “Macho” Camacho in his native Puerto Rico. This, as authorities there Wednesday afternoon announced the arrests of five individuals, four of them already in custody in other jails for other crimes, in the murder of Camacho and another man.

The Associated Press had details of the San Juan courtroom appearance of one of the suspects Wednesday with the others being extradited and/or transferred to the San Juan detention center to face the murder charges,

A decade after his death, five men are facing murder charges in the fatal shooting of renowned Puerto Rican boxer Héctor Camacho. Authorities have not revealed a motive in the slaying outside a bar in the northern city of Bayamón in November 2012. https://t.co/eiZTQMBOvV

From part of the AP’s item,

“Five men are accused in the slaying of the fighter nicknamed “Macho Camacho” and a friend while they sat in a Ford Mustang outside a bar in November 2012, a killing that shocked many who revered the boxer.

Three of the suspects were serving federal sentences for unrelated crimes and were flown in from Florida as part of what police called “Operation Knockout.” A fourth suspect was arrested in the pre-dawn hours in the same city where Camacho was killed, emerging with only a towel wrapped around his waist just minutes after police with long weapons surrounded his house and knocked on a window. A fifth suspect remains in a Puerto Rico prison for an unrelated case.

Authorities said two other suspects were killed in unrelated events in 2013 and 2015.

Hours after the suspects were charged, Camacho’s elderly mother strode into Puerto Rico’s Department of Justice and raised her right fist.”

As we wrote previously about the killing of Camacho that was part of a Showtime cable documentary by acclaimed filmmaker Eric Drath on the fighter’s life:

Camacho was murdered in November of 2012 outside of a nightclub in Bayamon, Puerto Rico. He and another individual were shot to death from automatic gunfire. Camacho was killed while he sat in the passenger seat of a vehicle.

As for Drath, he admitted in our conversation on the “Big Fight Weekend Podcast” in December 2020, that the documentary originally began specifically as a “whodunit film” to solve the crime. But then, the legendary boxing career of the flamboyant “Macho” became too large and apparent to ignore in telling his story.

Camacho’s career spanned 30 years professionally with him capturing his first World Championship in a National Television appearance on CBS network TV from his home country in 1983.

That Saturday afternoon, Camacho kayoed Mexican veteran Rafael “Bazooka” Limon in the fifth round for the WBC 130 lb. World Title with over 10,000 fans in attendance in a baseball stadium in San Juan and millions more on T.V. getting introduced to him.

Camacho went on to win Lightweight and Super Lightweight World Titles and defeated the likes of fellow Puerto Rican star Edwin Rosario, Vinny Pazienza and Ray “Boom Boom” Mancini on his rise to 37-0.

He later kayoed Sugar Ray Leonard in the final fight of Leonard’s career in 1997. He also lost to Hall of Fame Mexican star Julio Caesar Chavez, in a fight, where Camacho ironically gained more respect in defeat and from the pounding he took, but refusing to be knocked out.

Leonard and Chavez are interviewed in the Showtime documentary. Camacho also fought the likes of Felix Trinidad, Oscar De La Hoya and Roberto Duran before he retired from pro boxing in 2010 at the age 48. Sadly, he would be dead just two years later.

Camacho was posthumously put in the International Boxing Hall of Fame in 2015.

Back to the AP’s story on the arrests:

Former Puerto Rico boxer Víctor Callejas, a close friend of Camacho, told The Associated Press that it was extremely important to him that several suspects were finally charged in the case as he continues to mourn the fighter: “He was not the type of person who sought enemies. To the contrary, he was always looking to make people laugh one way or another. He was a unique character.” …

Janet Parra, a public prosecutor who oversees the justice department’s division of organized crime and drugs, said she could not reveal the motive behind the killing or share any evidence. However, she said authorities pursued every tip received, noting that sometimes it led them to a dead end.

Their attorneys could not be immediately reached for comment.

“They gave me justice,” said Camacho’s mother. “I can sleep in peace. I can eat and drink a little cup of coffee in the morning.”