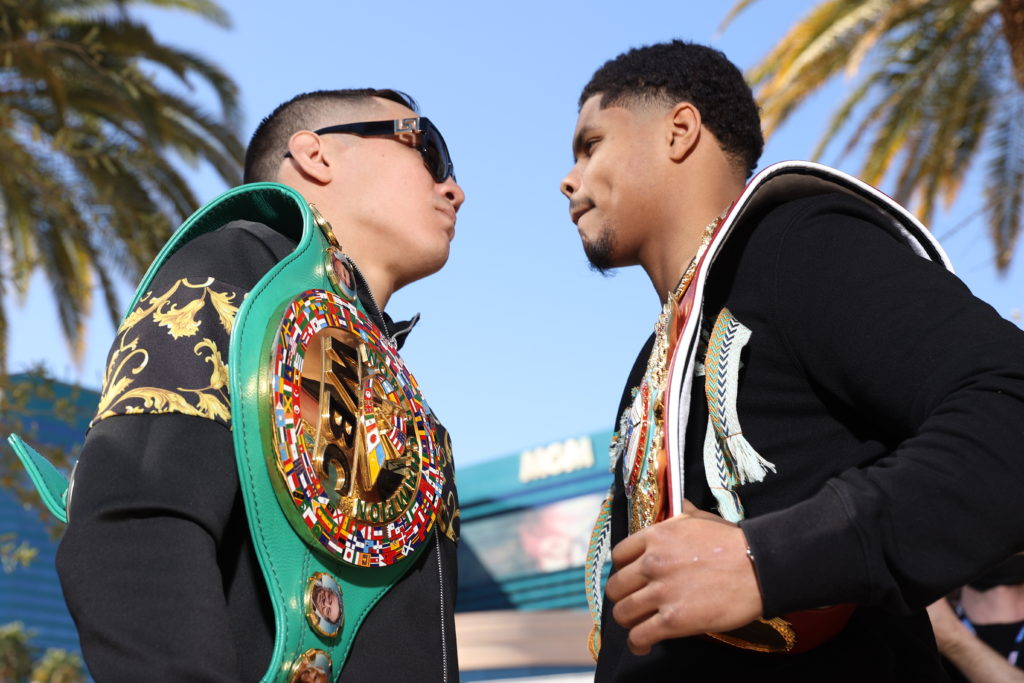 The battle for Junior Lightweight supremacy is on deck. This, as WBC champion Oscar Valdez will meet WBO king Shakur Stevenson in a title unification showdown between undefeated fighters Saturday, April 30th at the MGM Grand Garden Arena in Las Vegas.

And the two unbeaten stars came to the desert Wednesday to kickoff promotion of their intriguing bout late next month,

Promoted by Top Rank, tickets starting at $79 go on sale later today, Thursday, March 10 at 10 a.m. PT and can be purchased by visiting AXS.com.

“This is a fight between two fighters in their physical primes, the best fighting the best,” said Top Rank chairman Bob Arum. “Oscar and Shakur deserve the biggest stage, and it doesn’t get much bigger than ESPN and the MGM Grand Garden Arena. On April 30, a superstar will be born.”

Valdez (30-0, 23 KOs), the fighting pride of Nogales, Mexico, is a two-weight world champion entering his 10th world title fight. He authored the 2021 Knockout of the Year with his title-winning effort over longtime champion Miguel Berchelt.

Following up the win over the veteran Herring, this will be another huge step up in opponent for Stevenson, who’s clearly one of the top marketable fighters in Arum’s stable.

Valdez does have the drug controversy of having failed a pre-fight PED drug test before the Conceicao fight last fall. Yet, he was not only allowed to stay on and fight the Brazilian, but also keep his WBC title, too.

That controversy will continue to follow Valdez for awhile and will be part of the story line for the Stevenson matchup.