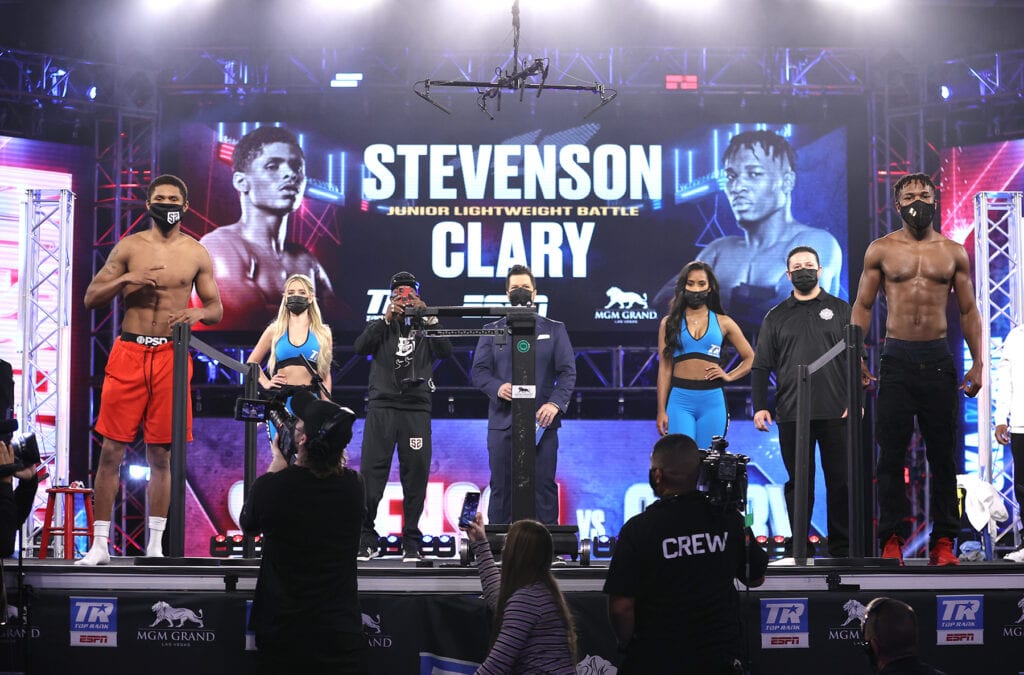 Saturday night,  Shakur Stevenson makes his return back inside “The Bubble” in Vegas, as he is the headliner for Top Rank Boxing. He takes on Toka Khan Clary on  ESPN starting at 10 p.m. E.T.

For the undefeated Stevenson (14-0, 8 KOs), the whole lead up into this fight, is once he gets past Cleary, he is looking to take on the big names at 130. Stevenson took this fight on short notice and was hoping that he would step in to face fellow stablemate, Oscar Valdez but speaking with Boxingscene stated that his camp wanted no part of it.

The weigh-in is over and Toka Kahn Clary 129lb plans to make a big statement when he faces Shakur Stevenson 130lb in tomorrow night's main event on @ESPN at 10pm ET/7pm PT. @DiBellaEnt #StevensonClary #boxing pic.twitter.com/DJISwgEVgv

To Valdez’s defense, the contest with Miguel Berchelt, which was the original matchup tonight, would be a title shot, and the one he had taken on Stevenson wouldn’t.  That fight is the next one for both of them at some point next year.

Check out our latest podcast as we preview all of this week’s action m including this fight, as well as the latest title defense of Anthony Joshua’s with “The Boxing Writer” David Payne below.

While Stevenson comes in the heavy favorite against Clary, Clary (28-2,19 KOs, 1 NC) comes into the contest ready for the opportunity at an upset of Stevenson.
“This opportunity is a blessing,” Clary said at the final press conference this week. “I’ll be sharing the ring with a former Olympic medalist and with a former world champion. I’m ready to show the world who Toka Kahn is. I’m ready for this level of opposition. We’ve been working hard for this. I’m excited about this fight.”
After this fight, Stevenson has been talking about taking on any of the big names at 130 on the Top Rank side of things if he is victorious against Cleary. One of those names he mentioned was Vasiliy Lomachenko, as he spoke on his loss against Teofemo Lopez and felt that he could do the same.
“I think that if me and Lomachenko fight, I think that’d be an easy fight,” Stevenson mentioned speaking with BoxingScene earlier in the week, “I think, with all due respect, I watched that fight with Teofimo, and I don’t respect the way that he fought. And I don’t think that a man with not a lot of heart could come in the ring and do anything with me. That’s just my opinion. I feel like heart was the problem in that fight.
I’ve been screaming from the mountain top that Lomachenko may move down, and he told me as such if it made “business sense” for him to, and we’ll see f that talk would be him and Stevenson in a matchup for 2021 after this one should Stevenson win tonight.
Continue Reading
Advertisement
You may also like...
Related Topics:Featured, Shakur Stevenson, Toka Khan Clary, Top Rank Boxing