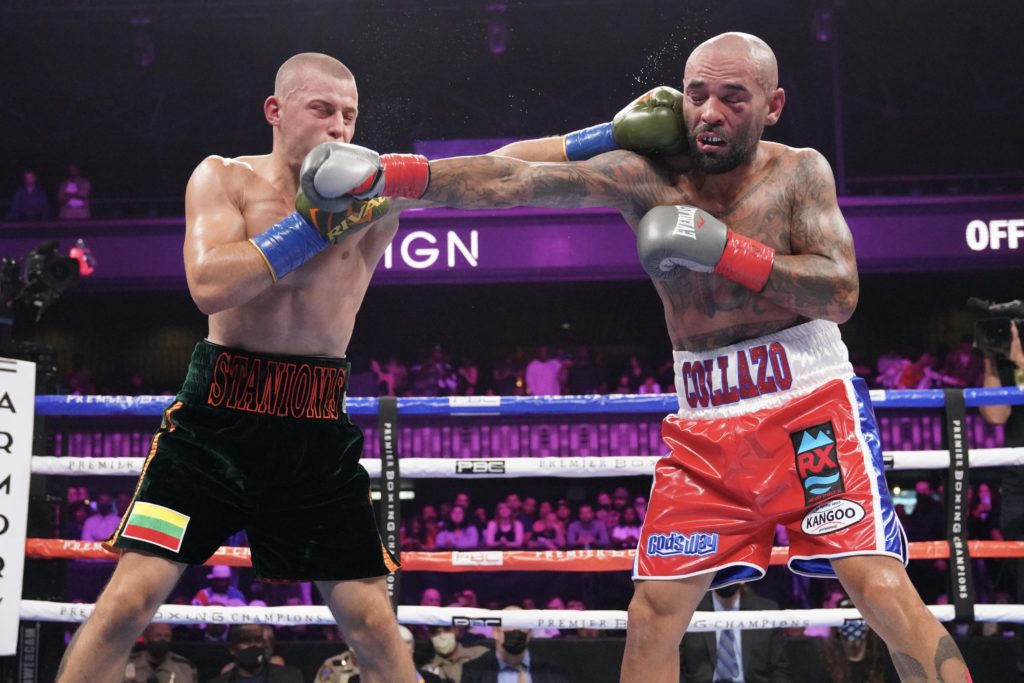 Judging controversy in boxing is nothing new and Saturday night’s Premier Boxing Champions fight card in Minnesota had that. But, it also had so much more in terms of bizarre circumstances and outcomes, including in the Welterweight main event between unbeaten Eimantas Stanionis and veteran Luis Collazo.

More on that fight in a moment.

First, up was the co-feature where another version of “highway robbery”on the scorecards took place. This, as Gabriel Maestre was given an indefensible decision over Mykal Fox. Even though, the southpaw Fox clearly outboxed and landed the more significant punches.

Now, the proceedings began with bizarre stuff happening before the first bell, as Maestrae’s gloves were questioned and one was removed and then, retapped while Fox had to wait. Take a look at frustrated fan documenting the mess on social media,

Literally witness glove tampering and a robbery in one night I was feet away this is some bull shit @premierboxing @WBABoxing pic.twitter.com/UlQma8BHLF

The glove issue was despite a Minnesota commission rep having signed off on the Maestrae gloves in the dressing room over a half hour earlier.

In the end, this fight even had a card where the Venezuelan born Maestre, comically was given a 117-110 victory. Of course boxing host/analyst Dan Canobbio quickly pointed out the dubious nature of the scoring and the “judge” turning in the card,

WBA judge Gloria Hernandez is married to WBA executive Ricardo Rizzo, so if you’re waiting for an investigation into her horrendous 117-110 scorecard, don’t.

The bout was for a WBA secondary belt (literally gifted and given to Maestre) and as Dan tweeted, don’t hold your breath for any scrutiny of what happened with the gloves in the Minneapolis ring. It’s likely going to just be allowed to be screamed about in the short term, with little to be done until memories fade later this year and next.

Next up was the Welterweight main event for Fox Sports TV between the 13-0 Stanionis and 40 year old veteran Luis Collazo. Clearly, the Lithuanian Stanionis was dominating landing big right hands on the slower Collazo throughout the first three rounds. Collazo, a former WBA World Welterweight champ in the early 2010’s, was game, taking punishment, and even occasionally landing combos of his own.

However, Collazo’s punches had little on them, were slowing down as the second and third rounds went by and he was clearly suffering from bad swelling of his left eye. Stanionis was out-landing him 3 and 4 to 1 in hard punches.

So, this fight was a matter of time from being stopped. But, it was fitting for the night, as an accidental clash of heads that stopped things at 2:31 of the fourth round.

The Puerto Rican born Collazo had re-coiled from the clash that opened a cut over his right eye and then remained crouched and even, on his knees near his corner. This, while being given time to try to recover and continue. Eventually, he could not and the referee waved the bout off for a new contest due to it not lasting four rounds.

Stanionis deserved his win and Collazo deserved better than that ending to what is likely his last fight.

Yet, in the end, it was only fitting for the night that will be remembered more for controversy in Minnesota.