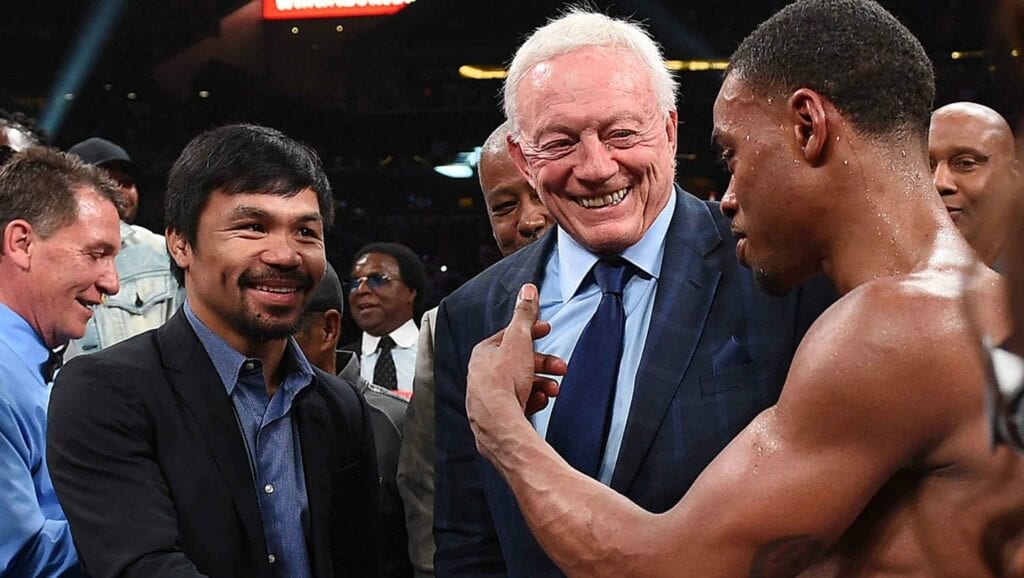 It was around this time last Saturday, we all were anticipating how many of us would be sitting around talking about the Crawford vs. Khan for years to come.

Now we are all asking ourselves, “How many pay-per-views did it get?” Included in those names is current IBF Welterweight champion Errol Spence Jr.

In an interview with BoxingScene, Spence sat down and unloaded some gems as he discussed the chances of a fight with current WBO Welterweight champion Terrace Crawford following a weigh-in for the Robert Easter Jr.-Rances Barthelemy showdown on  Saturday night at The Cosmopolitan.

“His promoter needs to do a better job promoting him, I guess,” Spence said in the interview, referring to Crawford. “I feel like he was a failure on the promotional side, so I think Bob needs to get back to the drawing board if he thinks me and Crawford’s gonna be a 50-50, down-the-middle deal. If I’m bringing in probably over 400,000 pay-per-view buys and he’s doing a hundred and something, why should we split it if we fight each other?”

Spence mentions probably because FOX, which distributed the Spence-Garcia fight March 16 from AT&T Stadium in Arlington, Texas, or ESPN, the distributor of Crawford-Khan last Saturday from Madison Square Garden, have officially announced buy rates for those fights. The report from ESPN back in March is everybody’s best guess at 360,000 regarding Spence-Garcia.

Spence also in the interview questioned the way Crawford-Khan was promoted by Top Rank Boxing.

“It’s not just the opponents he’s fighting, but the whole promotional thing behind him,” Spence stated to BoxingScene. “Like when Showtime promotes and FOX promotes, they really put everything into it. With the Crawford fight, you really didn’t hear nothing until the week of the fight. I kind of forgot about it. I didn’t hear nothing about it until the week of the fight. They started promoting it probably Thursday or Friday. That’s when it really got out there like that. So, I feel like they could’ve done a better job of promoting it.”

“With Crawford, it’s a lack of promotion,” Spence said. “I feel like Bob doesn’t promote Crawford like he should. I don’t know what that’s about, but I feel like he promotes Lomachenko way better than they promote Crawford. Even with the lead-up to the promotion of the Crawford fight, they were talking about Lomachenko in the same sentence with Crawford. Why are you talking about Lomachenko, when you’ve got your pay-per-view fighter fighting Saturday night? Every time they mentioned Crawford, they mentioned Lomachenko. What are you doing that for, when you’ve got Crawford fighting?”

Spence may have a point in regards to this. While we are all still playing the guessing game on who saw both of these fights at prices tags of $74.99 and $69.95 respectively, the push for the Lomachenko knockdown of Crolla was almost everywhere I would catch the crawl at the bottom of the ESPN family of networks. Of course, the easy reasoning for that is because you could’ve seen that fight for absoultely free.

I don’t question how ESPN pushed the fight, but I do question the anticipated buzz surrounding it as I sat with friends to catch the fight at a wing chain restaurant where you would’ve thought based on the turnout on Saturday night, they were closing down or at the very least submitted their application to be on the next episode of “Bar Rescue”.

We do know at least know how Premier Boxing Champions did with the Danny Garcia-Adrian Granados card did in the ratings airing on free Fox television last weekend with 1.082 million homes checking in.

For the rest of the fight numbers, we’ll all sit back and watch, I think.