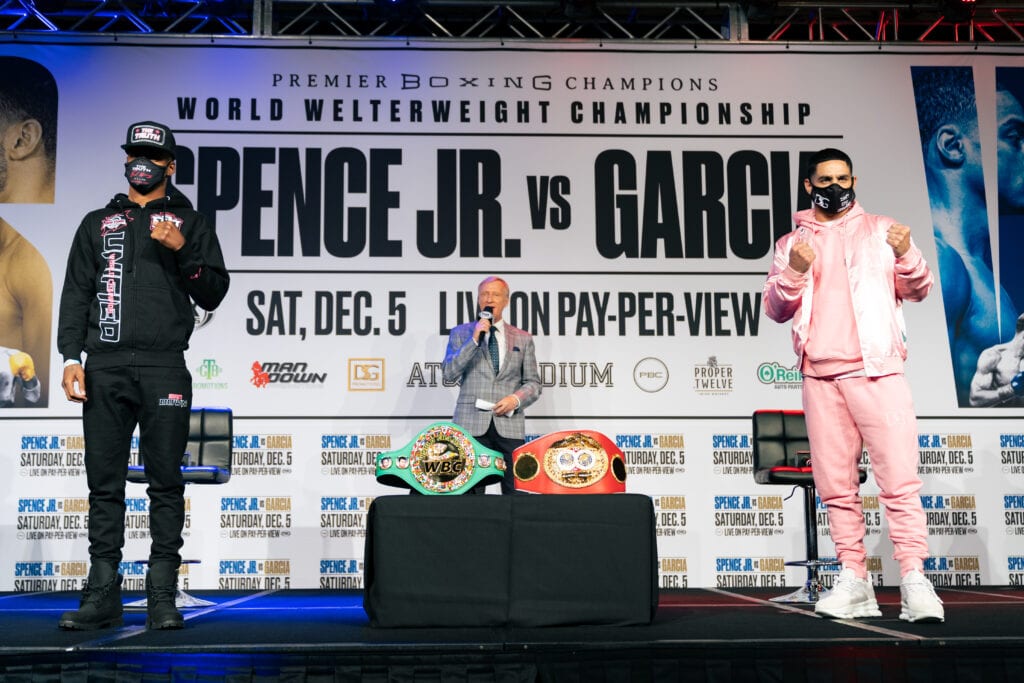 Spence-Garcia Is Finally Upon Us

Speaking at the final press conference for the title fight Wednesday, Spence made it clear that we will see the same Spence in the ring on Saturday.

“We’ve been in the gym since February grinding hard, and now we’re back. I’m ready,” Spence said at the final press conference. My coach has watched me closely, and he’s seen that everything is on point and back to where it was. Everyone is going to see the same Errol Spence Jr. on Saturday night.

Spence mentioned that he didn’t want a tune-up after his single-vehicle car accident and was solely focused on taking Garica on in the ring after what will be over a year, not in the ring.

“Nobody forced me to fight Danny Garcia. But I wanted to face someone dangerous who would keep me focused and in the gym training hard. Fighting someone who’s a great fighter like Danny pushes me to another level. That’s the level I’m supposed to be at,” Spence stated.

The Final #SpenceGarcia Press Conference is over, we're just 3 days away until they're finally in the ring!

For Garcia, it’s a chance to become a three-time champion and a chance at Spence, announced as the challenger since Spence defeated Shawn Porter last September in the ring.

“I called Errol out a year ago, and we were going to fight in January. But boxing is a sport of timing and the time is now. I feel great and had a tremendous camp. I did everything I was supposed to do. I have to go out there Saturday night and do what I do best, ” Garcia said.

That January call-out instead became a stay-busy fight for Garcia where he outmatched Ivan Redkach over twelve rounds where the only thing of note was that Redkach bit Garcia in the ring. Garcia, heading the contest, know what is on the line taking on Spence.

“We (him and dad/trainer Angel Garcia) definitely know what’s at stake. We pushed ourselves to the limit every day. This is a big stage, but I’ve been here before. I’ve been headlining fights on the championship level for eight years. I’ve always been a top-level fighter,” Garcia mentioned.

“You can say what you want to say at this point. I’m here for the fight of my life. Come Saturday night; I will be victorious.”

Big time matchup in the welterweight division and a lot of intrigue on what Spence will look like is what we will find out early in this one to close out “Jerry World” on Saturday.

Murray Questions Saunders Competition
Lennox Lewis On Errol Spence- “Nobody Knows For Sure He’s Okay”
Advertisement
To Top
We use cookies to ensure that we give you the best experience on our website. If you continue to use this site we will assume that you are happy with it.OkPrivacy policy