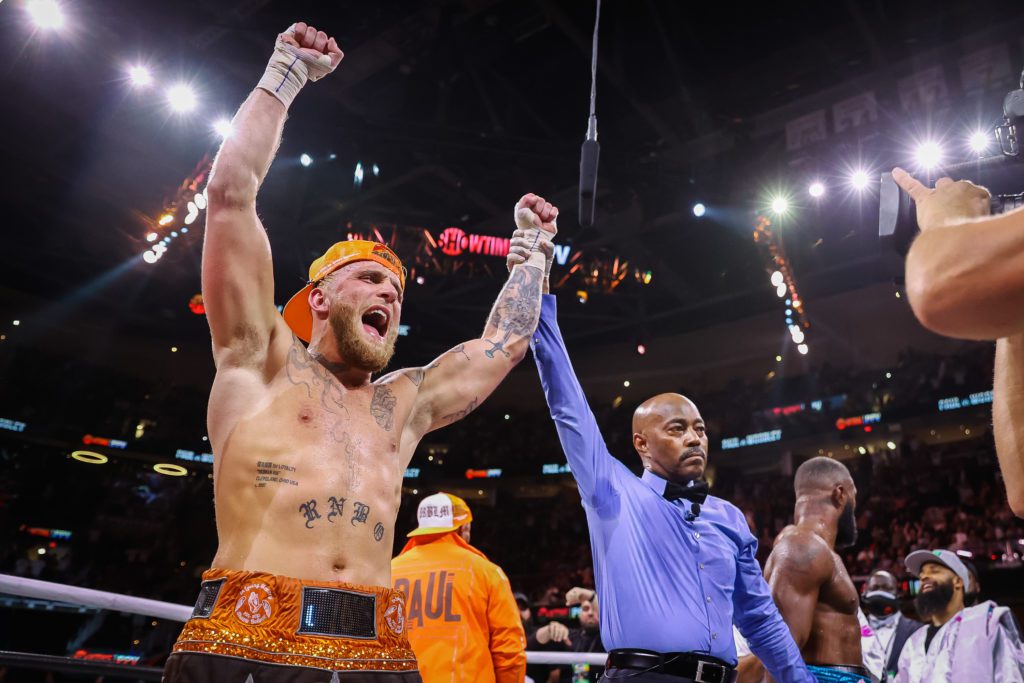 As we head into 2022 and prospective fights that fans and observers will care about, certainly the established world champs and contenders will take priority. However, a level down, there is genuine interest from the public in what’s next for Youtuber/social media star turned boxer Jake Paul?

We just saw Paul get his latest “wipeout KO” with a one punch bomb over former UFC Welterweight champ Tyron Woodley in their rematch last month in Tampa, FL. That ran his record to 5-0, but all against non-trained, skilled boxers.

So, the obvious question is will Paul take the next huge fighter credibility step coming up?

We posed that Showtime Boxing analyst and insider, Brian Campbell on our most recent “Big Fight Weekend Podcast” and he agreed it’s time to see a better “boxing foe” for Paul. Here the full conversation here:

“That’s the end game that people want…Eventually, that will be the thing that cements and justifies that he will be ‘a real fighter.’ But the steps to getting there are incremental…” Campbell, who’s now part of the “ShoBox” prospect t.v. series, told BFW.

“He’s talking about potentially Julio Cesar Chavez Jr. in 2022….The Chavez question is interesting. We did just see Chavez Jr. lose to Anderson Silva. We’ve seen Chavez Jr. through away most of his career. But he’s big and he was a former champion. He’s the son of a legend. Should he want to care again and put it all together, that could not only be a much tougher fight than Jake might realize, but that could him the next step closer to the legitimacy that we’re talking about.”

We wrote in the aftermath of the Paul KO of Woodley that Chavez, Jr. is a name to watch for Paul’s possible radar. The 35 year old Chavez Jr. did lose, while looking out of shape and sloppy, to the former MMA star Sliva by split decision last June.

However, despite all of his out of ring controversies, etc., he does have a 53-6-1 pro record. And, as Campbell mentioned he is a former world champ owning the WBC Middleweight belt in 2011-12 before losing it to Sergio Martinez.

Chavez Jr. has also had failed pre fight drug tests and suspensions, since then, as well.

Still, he brings experience and name recognition to the table, if there’s interest from Paul.

For his part, the big punching, failed actor turned “Instagram-Tik Tok-Youtube star” made clear recently that he’d at least consider fighting the son of the Hall of Famer, Chavez,

Does that last part imply that Paul sees how much Chavez Jr. has in fight experience and doesn’t want to risk his momentum and dramatic, highlight KOs against someone with that much more ring time in his next bout? Probably.

However, Paul may also feel confident that at Chavez’s age, and with how out of shape he’s looked in recent fights, he’d still a suitable target for Paul’s lethal right hand.

For his part, Chavez Jr. gave a recent video interview in Spanish, but said the right “short sound byte” about a possible fight with Paul,

Still, Chavez Jr. has been long on talking/bravado and short on big time wins for years. And, Paul may ultimately have no interest in actually fighting him.

Then, again, there’s certainly a lot of boxing people mentioning the matchup and when Paul didn’t outright dismiss fighting Chavez Jr. in the near future, it’s still an option for 2022.