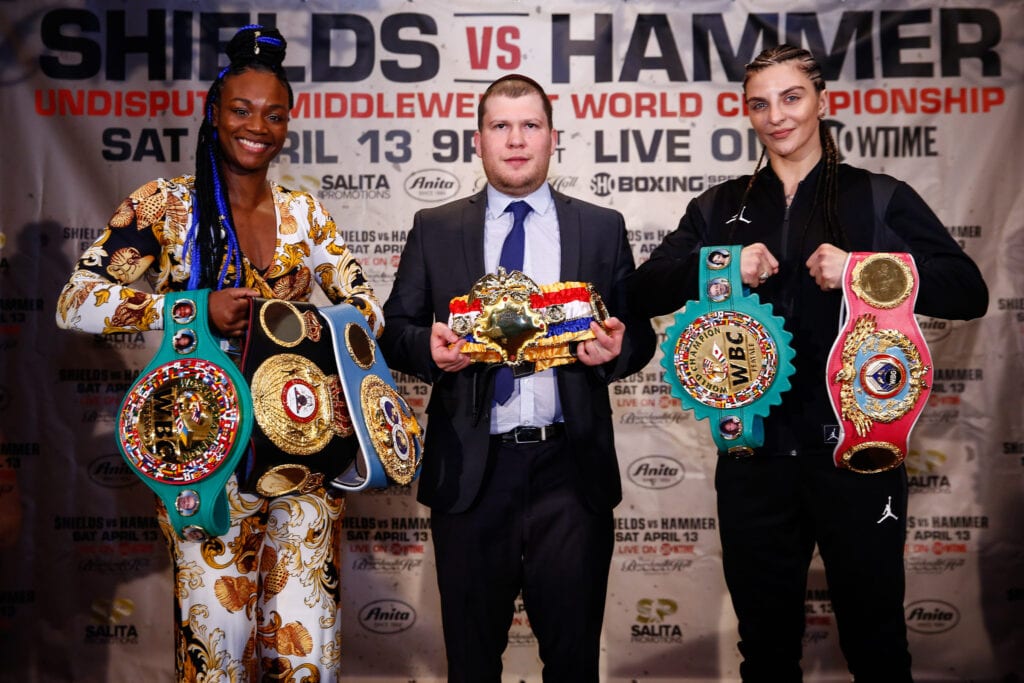 Claressa Shields and Christina Hammer met at Gallagher’s Steakhouse in Manhattan on Wednesday as part of a media luncheon. The two undefeated women’s champions square off in a first-ever middleweight unification bout on Saturday, April 13th at the Boardwalk Hall in Atlantic City, New Jersey starting at 9 pm.m on Showtime. They had a heated face-off on Wednesday and here is what they had to say.

Shields during the lead up to this fight has been consistent in her words about victory and still wasn’t backing down from that while she was talking to the media.

“Hammer signed up for something she shouldn’t have sitogned up for. She’s going to get hurt on Saturday. I love that she has an accomplished record. People say I don’t have power or this and that but on paper, I’ve been an underdog in most of my fights and I’ve beat all those women.”

“When I beat Christina Hammer on Saturday, I want everyone’s headline to say ‘Shields nails the Hammer’. It’s not a game to me. It’s going to be bad for her.”

“I’m glad Hammer is here and we’re really going to fight. She’s tough, but I’ve beat girls way stronger, faster and taller than her over and over again. I can’t wait to do it again on Saturday.”

"On paper I’ve been an underdog in most of my fights and I’ve beat all those women." – @Claressashields #ShieldsHammer pic.twitter.com/WZWRZmm6qP

Hammer as well has maintained the notion of letting Shields talk as that wasn’t her way but would rather settle it in the ring on Saturday as she told the media.

“She can say whatever she wants here, because I’m going to show it in the ring. I don’t like to talk too much. I’m here to show my skills in the ring and get all these belts.

“I’m emotionless in the ring, because it’s my job. None of her talk will affect me. When you’re emotional in the ring, you make mistakes. “

“I know that it’s a risk to come from Germany to the U.S. to fight Shields. But I have done everything to bring it to her and break her down round-by-round. I want to show the people who the real champion is. A real champion fights everyone, all over the world.”

One thing is definitely certain, history will be made as these two touch gloves in Atlantic City Saturday night.

Time to let the 👊🏻 speak.
🔨🔨🚀 your trash talk bores me… #Hammertime on @ShowtimeBoxing pic.twitter.com/g6jnGgZiNx

Wilder preferred next fight for Joshua
Shields, Hammer Weigh-In Results
Advertisement
To Top
We use cookies to ensure that we give you the best experience on our website. If you continue to use this site we will assume that you are happy with it.Ok