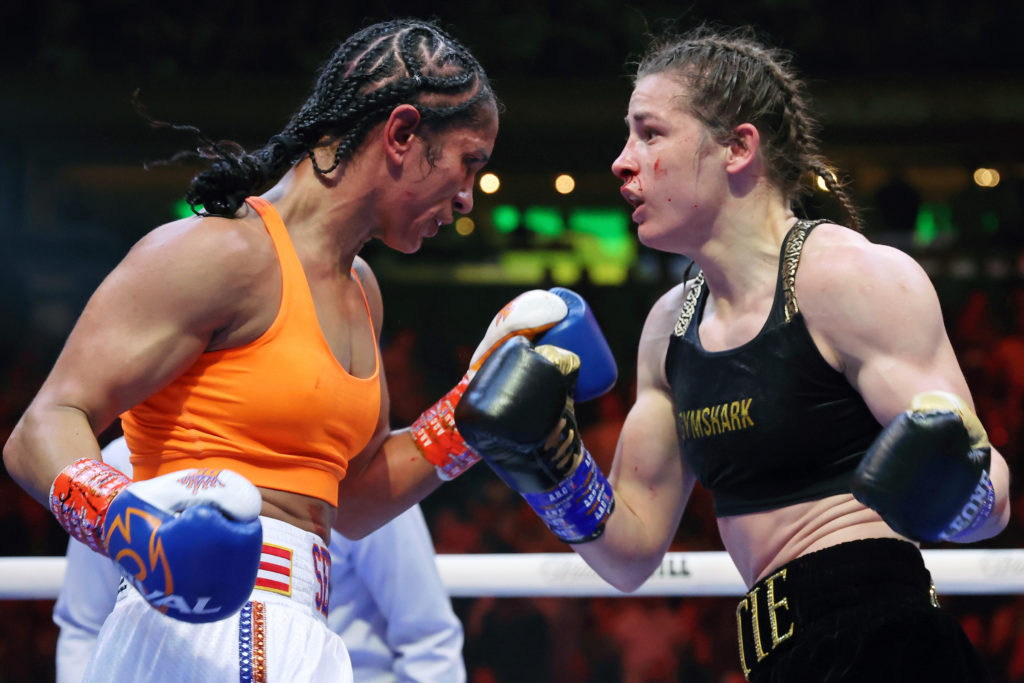 It’s one of the most hallowed venues in all of sports and on Saturday night Katie Taylor and Amanda Serrano “woke up the echoes” of what Madison Square Garden has been for so many decades. The two, who were fighting in arguably the most significant ladies championship boxing match ever, put on a thrilling display of toe-to-toe slugging over 10 rounds that will have fight fans talking about April 30th, 2022, for years, if not decades, to come.

Yes, Taylor got the victory in a come-from-behind, narrow split-decision win to retain her undisputed lightweight championships and remain iconic in the women’s sport, but there were no losers on Saturday night. This is, especially when Serrano had to previously scratch, scrape and claw just to get several hundred people, or maybe a thousand, to attend any of her marquee fights throughout the majority of her career.

No, on Saturday night The Garden was full. Full of a partisan, revved up fight crowd of over 19,000 (Irish for Taylor, Puerto Rico/NYC for Serrano) who more than got their money’s worth from the action they saw in the thrilling main event.

Sure, the kind of events like Ali Frazier I in March of 1971 deserve to be in their own category. That’s reserved for the “Greatest of All Time,” and remember, Joe Frazier beat him that night in the first of their trilogy.

Continuing, Madison Square Garden has had other thrilling moments throughout the decades, like basket baller Willis Reed the year before in 1970. The big man leader of New York’s team limping on the court to score a couple of quick baskets in game seven to inspire the Knicks to defeat Wilt Chamberlain, Jerry West and the Los Angeles Lakers for the NBA Championship. The highlights are still shown every year, 50 years later, when they televise the NBA Finals.

And, yes, New York sports fans will talk forever about their 1994 Rangers hockey Stanley Cup title victory defeating Vancouver in a dramatic 7th game with Captain and Hall of Famer Mark Messier leading them to New York’s only Stanley Cup title of the last 72 years, going all the way back to 1950.

But, there’s something just different about the sweet science.

With tremendous Fighters like Rocky Marciano, Roberto Duran, Hector Camacho, Bernard Hopkins, Felix Trinidad and Roy Jones Jr. all having taken their runs and having battled in the famed MSG ring. The place is full of memories of the greats.

And, Taylor and Serrano 100% the long on that distinguished list with their title resumes and what they provided Saturday night. Their skill and pure toughness to hammer each other over 20 minutes of action and remain standing to the finish is the stuff that legends are made.

The fury of the fifth round and then, the dramatic final minute of the 10th with the deafening crowd roar accompanying it, said it all.

It was a long time coming for women’s boxing and Taylor’s Saturday night crowning win over a future hall of famer in Serrano was so much more and fitting for a place like the Garden.