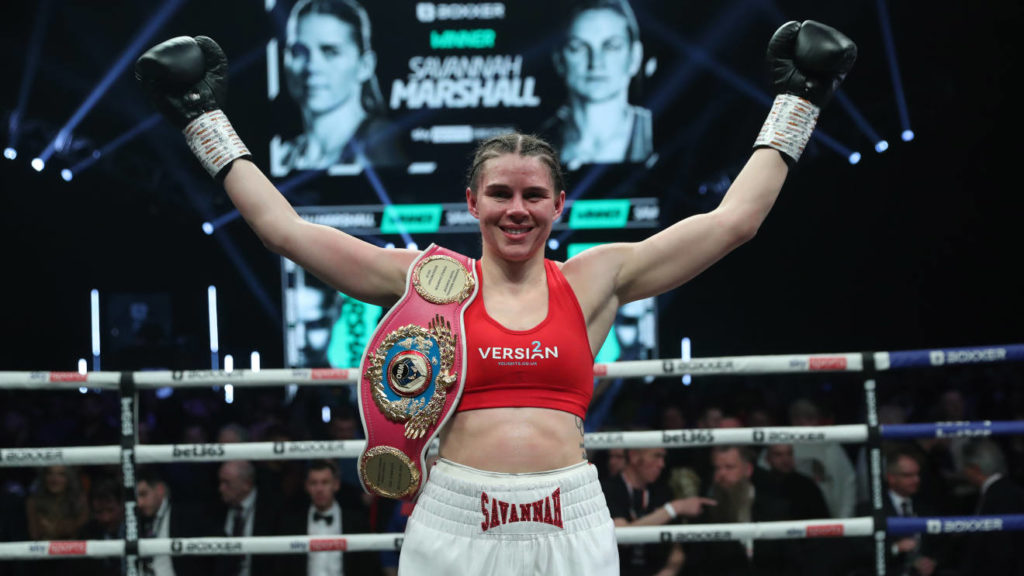 WBO Women’s Middleweight Champ Savannah Marshall wanted to make an impression in her Saturday night headlining title defense and she delivered, big time in round three.

That’s when Marshall dispatched Femke Hermans with a single overhand left to end their scheduled 10 round battle in Newcastle, England. The bout was the main event of Boxxer Promotions and Sky Sports in the U.K.

Marashall, 12-0, 10 KOs, out of Hartelpool, England, defend her title for the third time since winning the vacant WBO belt October 2020 and Saturday night was her fourth consecutive title victory by KO or stoppage. She began this bout in Newcastle a little cautiously in round one, scoring occasionally with the jab. Marshall landed a couple of significant punches, including a good left in round two.

Then, in the third round, the champ picked up the pace and pressured Hermans to the ropes and began to score with combinations. She staggered the Belgian Hermans with a left in the final :15 seconds before landing the booming overhand left that ended the fight with Hermans laid out on her back.

Marshall will now look towards an Undisputed battle with unbeaten American Claressa Shields, who holds the WBA, WBC and IBF ladies world titles at Middleweight. It was no mistake that Shields was in attendance on Saturday night and came into the ring to confront Marshall and hype their prospective bout later in 2022.

For her part, Marshall made clear to Sky Sports in the ring post fight that she is ready for whatever is next,

“I know Claressa can’t handle my power. I know when I face Claressa it will be a good night. I believe I severely hurt Claressa.”

For her part, the Michigan native and former Olympic Gold Medalist Shields held her ground on Marshall’s latest KO,

“That is what you are supposed to do, I said she would do that with Femke,” Shields said. “I’m not Femke Hermans, I’m not Hannah Rankin, I’m not any of those girls she fought against.

“As much punch power as she has got, if that’s what I have got to look forward to, it’s going to be a wipe-out.”

We will see if the Undisputed bout gets made for later this year.

The 29 year old Marku improved to 11-0, 7 KOs, as he scored repeatedly with overhand rights and combos behind them in the fourth round. He staggered Jenkins twice and the second time caused the referee to jump in and halt the action for the TKO.

Does Gennady Golovkin Have Much Left?
Will Addition Of Joe Goosen In Ryan Garcia’s Corner Pay Off?
Advertisement
To Top