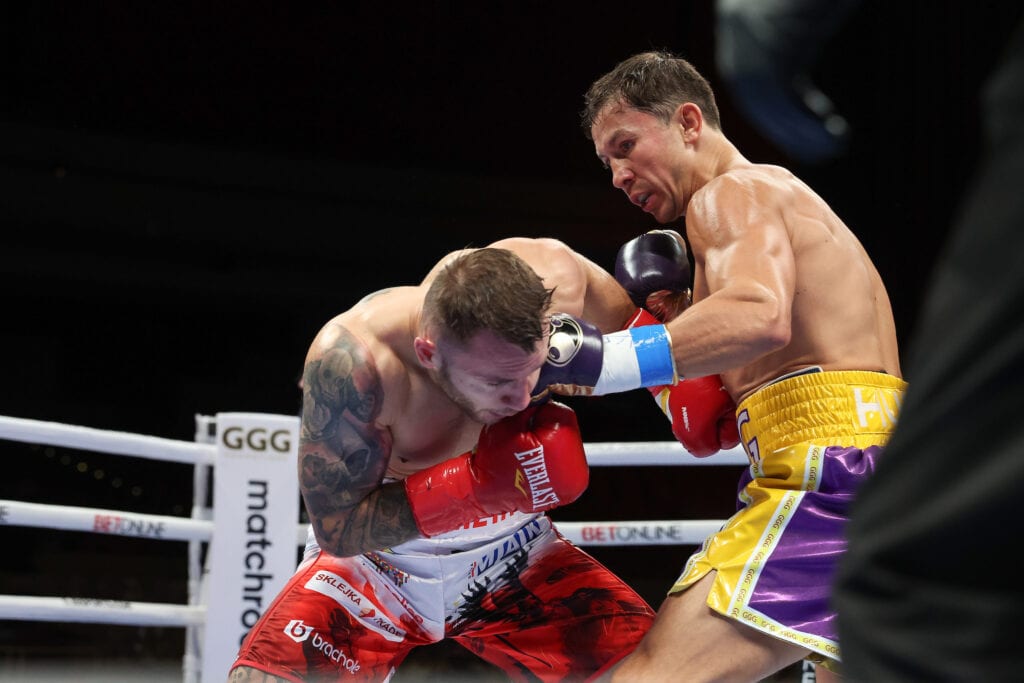 Does Gennady Golovkin Have Much Left?

With his latest world championship Middleweight title battle looming in Japan next Saturday, one of the iconic 160 lb. fighters of all-time, Gennady Golvokin, wants to prove that at almost 40 years old, he’s still a top-level championship fighter.

And, it’s a subject that we discussed on our latest Big Fight Weekend Podcast with boxing media personality and even, part time fighter now, Michael Montero of MonteroOnBoxing.com and Ring TV.

He and T.J. go through their  thoughts and analysis on the IBF/WBA Middleweight title showdown with  Golovkin (above) taking on Japan’s Ryota Murata there next weekend.

Is Triple G, 41-1-1, well over the hill and can the very popular Murata wow his home fans coming up?

As we wrote earlier this week, Golovkin has already arrived in the Far East to prepare to take on the popular Murata in his home setting. The fight has had to be rescheduled from late December due to Covid concerns and policies in place in Japan last Winter. Those were not only limiting international travel into the country, but also limiting the number of fans for the live gate at the big arena in Saitama, Japan.

Now, those concerns have been eased and the Triple G-Murata battle will kick off a big month of worldwide bouts on the schedule.

Those include T.J. and Michael discussing the world Welterweight battle between champions Errol Spence and Yordenis Ugas coming in Arlington, TX on April 16th. Can Spence set up mega-fight with fellow unbeaten, WBO champ Terence Crawford for later this year?

The guys also talk about England’s “Gypsy King,” Tyson Fury preparing to defend his WBC Heavyweight title on home soil against countryman, Dillian Whyte the following week of April 23rd. Can Fury deliver a big win and move closer to fighting for the Undisputed crown later this year?

Then, T.J. wraps with going over some of the title fight odds and makes a couple of early predictions, too.

It’s all part of the “Big Fight Weekend Podcast” and make sure to follow/subscribe on Apple Podcasts, Spotify, Google, etc.!!