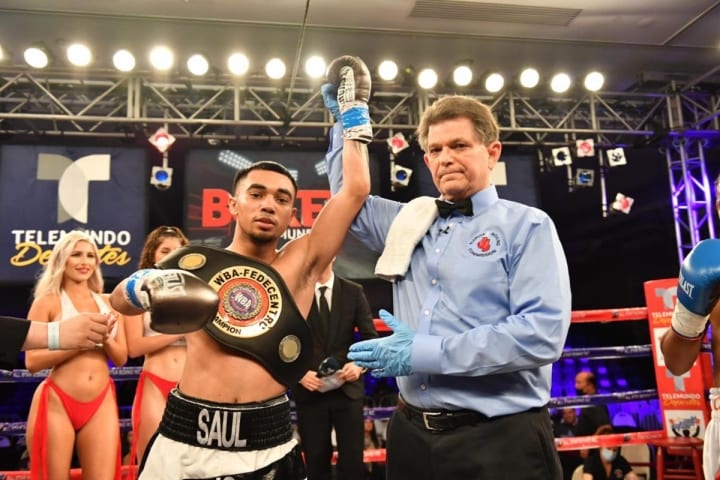 Bantamweight contender, Saul “The Beast” Sanchez (16-1, 9 KOs), is looking to fight for a bantamweight world title by the end of the year. Sanchez, who is trained by Manny Robles, is currently on a four-fight win streak.

This past Friday, March 19th, the Thompson Boxing Promotions’ prospect  Sanchez defeated Frank “El Castigador” Gonzalez (8-2, 4 KOs), by way of a first-round knockout on a card promoted by All-Star Boxing. Sanchez, who showed utter dominance in the bout, is now looking for the top names in the division.

“I am open to any and all world champions in the bantamweight division,” said Sanchez, who won the WBA Fedecentro Bantamweight Title on Friday. “Whether it is Naoya Inoue, Guillermo Rigondeaux, Reymart Gaballo, or any of the other world champions – I am ready! I have trained my whole life for this moment, and I am prepping to seize upon the opportunity.”

“Saul has come along way since he suffered his only defeat, which was a split decision loss,” stated promoter Ken Thompson, “Sanchez is on a nice winning streak and we will do out part to get him in position to fight a top name. His future is bright.”

“We believe Saul has made that turn in his career, where he is ready for the championship level,” said Alex Camponovo, Thompson Boxing’s general manager. “Right now, we are looking at the landscape of the bantamweight division with the goal of getting Sanchez in a big fight.”

“I know that I have made great strides to get to the highest levels of the sport, and I feel that after this past performance, I am putting myself in the best position for a world title,” continued the 23-year-old Southern California boxer. “I have a great promoter in Thompson Boxing, and I know my time is coming soon.”