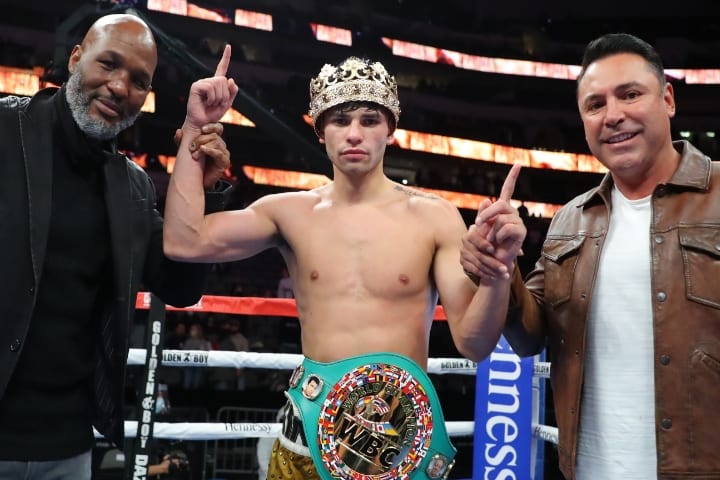 Without question rising Lightweight contender Ryan Garcia has developed a large following via social media due to his handsome looks/persona and in the ring, due to his punches damaging his opponents.

And for a member of the Pittsburgh Steelers in the NFL, he found out how hard the Californian hits… the hard way recently.

As Garcia posted on Instagram, he demonstrated the same type of body shot that ended his January contender fight with England’s Luke Campbell on Pittsburgh’s JuJu Smith-Schuster. Observe:

As the video shows, Garcia took numerous hard swings at Smith-Schuster, who is wearing protective mid-section padding in the workout session. And after banging one of the premier receivers in pro football with his lefts, Garcia pivoted and threw several right hooks to the padded ribs of Smith-Schuster.

And, in the end, just like Campbell, the 6’1 225 lb. Smith-Schuster, who caught 97 passes for a career high 9 TDs for the Steelers in 2020, ended up on all fours to end the demonstration.

As for Garcia, his KO of Campbell on January 2nd in Dallas solidified him as the next challenger for WBC Lightweight champ, Devin Haney, later in 2021.

However, Garcia, now 21-0, 18 KOs, has made clear that he instead wants WBA Jr. Lightweight Champ Gervonta Davis next. Garcia said that night,

This fight I put down an Olympic Gold Medalist (Campbell). Lomachenko couldn’t stop him. Linares couldn’t finish him. I showed today, I’m special.”

He then led the over 5,000 fans in attendance, with Haney one of them at ringside, in a chant of  “we want Tank!, We want Tank!”

Garcia,  repeated that desire to fight Davis last Saturday night in Miami, as he served as a guest analyst pre and post fight of Canelo Alvarez’s TKO win over Avni Yildirim.

Meanwhile, to show his popularity online, Garcia’s instagram post had been viewed an incredible 636,000 times as of Thursday night.

It’s not just the power punching, but that kind of following that has people wanting to see more of him in 2021.