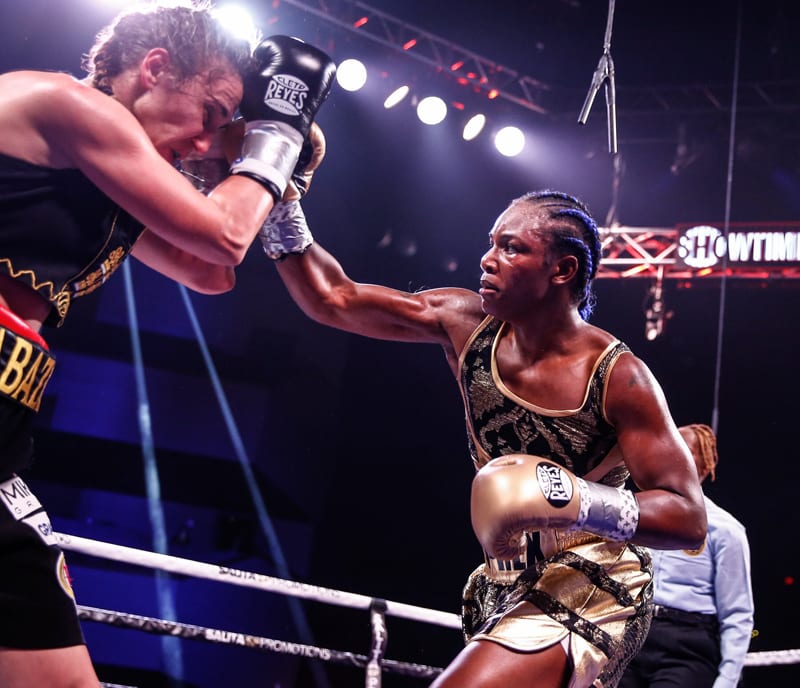 The anticipated next fight in the career of Unified Women’s Jr. Middleweight World Champ Claressa Shields is set to officially take place Friday night in her hometown of Flint, Michigan. This after both Shields and her opponent, IBF champ Marie Eve DiCaire made weight Thursday afternoon.

Who will make #HERStory tomorrow?

As for the French-Canadian DiCaire, she knows that she is the heavy Underdog, but will be prepared. She told the media earlier this week,

“I know it is a significant fight, but I made sure I’m focused on the task I need to accomplish and not the outcome of the fight. My strategy is based on my skills. Where she puts her focus is up to her. On my side, I did everything I had to get ready for this fight. And I am!

“I’ve always said that boxing is a passion, and I am happy to make a living out of it,” DiCaire continued. But, to me, it is more than that. It is a way to inspire people, to change society’s mentality. I want to achieve greatness to inspire people to dream big and this is what this fight is all about to me.”

The fight card has been dubbed “Superwomen” and will be an all-female pay-per-view card presented by Salita Promotions in association with Groupe Yvon Michel, who promotes DiCaire.

Shields is looking to become the first boxer, male or female, in the four-belt era to become an Undisputed World champion in two weight divisions.  Shields was last in action in “one way traffic” against Ivana Habazain in a decision win in January of 2020 in Atlantic City.

This main event has been delayed while promoters and officials worked out being able to have some fans socially distanced in attendance and also the PPV details through Fite TV, etc.